Once the lively duo of TomÃ¡s Cotik (violin) and Tao Lin (piano) completed their CD of Schubert music, they looked at each other and said, âWhatâs next?â Lin pulled out his vinyl collection of Ãstor Piazzolla and they found the answer. 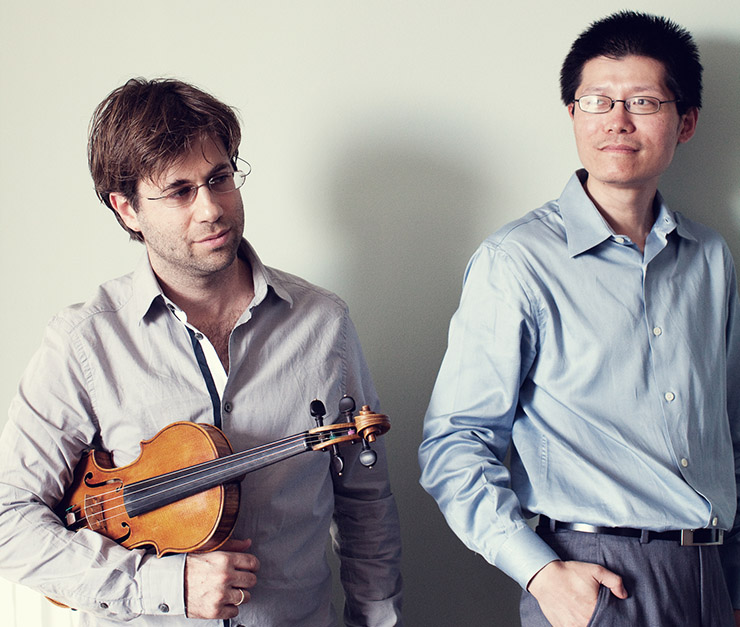 Ron Weber, helmer of South Florida Jazz (now in its 23rd season), took a slight musical detour from SFJâs normal fare of straight ahead jazz, and served up the music of tango master Ãstor Piazzolla to a south Florida audience Saturday night (Jan. 10) at the Rose and Alfred Miniaci Performing Arts Center.

Curiously, jazz and tango have much in common. They both emerged side by side in the late 19th century. Jazz centered in New Orleans and tango in Buenos Aires, and played to the more colorful side of its people. Where you might think of Louie Armstrong first for jazz, think of Ãstor Piazzolla for tango.

The parallel continued. In the 1920s, small combos played Dixieland and tango in their respective dance saloons. Tango ensembles blossomed into orchestras much like the American Big Bands of the 1930s, and then reverted back to smaller ensems in the 50s, playing ever more sophisticated compositions. The transition was from music you danced to, to music for listening.

Like Mozart, restless to assimilate all the musical styles of his day into his own works, Piazzolla wrote with both performing experience and a passion for wider audiences. This resulted in pushback from the traditional tangonati but blasted Piazzolla into interstellar acceptance by the rest of the world.

Piazzolla created ânuevo tangoâ (new tango) by weaving classical and jazz elements into traditional tango. Maybe it was the influences of living in Greenwich Village as a child, hearing jazz and listening to his fatherâs tango records, or learning how to play Bach on his bandoneon (small accordion) at the age of 12, or learning classical composition and counterpoint with the legendary French composition teacher Nadia Boulanger, that converged in Piazzollaâs mind to form the basis for nuevo tango.

Cotik and Lin (admonishing themselves for not being dressed in the required black garb for playing tango) offered up repertoire from their recording, Tango Nuevo: The Music of Ãstor Piazzolla, and their second recording of Piazzollaâs compositions, to be released later this year.

Counterpoint was immediately evident in the feisty piece, âLa muerte del angel,â Cotik and Lin closely following each other, Cotikâs violin full of confident swagger. He handled the upward glissandi, gliding on a string from one pitch to another, with aplomb.

Nuevo tango typically alternates between fast and slow, from piece to piece or within a single work. The uptempos present gritty rhythms and harsh pointed melodies, while the slower songs emphasize melancholy and despair, usually through a lyrical solo voice. Linâs haunting piano in âMilonga del Angelâ supported Cotik, who coaxed the melancholy out of his instrument with nuanced passion.

Percussive elements resulting from techniques used in traditional tango, like plucking, instrument slapping with hands or by striking the string with the side of the bow, and lija, a rhythmic scraping sound â what Piazzolla called âsandpaperâ â achieved by bowing the strings slightly behind the bridge, were evident in âFracanapa,â musically portraying the decadence of the middle class. Cotik and Lin tracked each other well through this percussive sprint.

Piazzollaâs homage to his father, âAdiÃ³s Nonino,â was recorded over 200 times by many musicians. Cotik and Lin took sturdy turns with the mournful melody and adeptly essayed the many tempo changes to illustrate the gratitude, happiness and sadness inherent in the emotionally rich piece.

Piazzollaâs mission to elevate tango from the brothels and cafes into the concert halls might be embodied in his later work, âHistoire du Tango.â

He attempted to convey the history of the tango in four movements, styled at 30-year intervals: Cotik and Lin navigated the high-spirited Bordello 1900, Lin pounding his piano as if dancing. CafÃ© 1930, where folks stopped dancing and started listening, was more musical, Lin luxuriating with a romantic melody while Cotik spoke with a dramatic voice. Nightclub 1960 and Modern-Day Concert expressed a mounting energetic contemporary theme, which rolled into a dissonant rhythmic scamper, that would no doubt have caught Stravinskyâs attention.

In a surprise move, Cotik and Lin gave voice to another composer who also stitched dissimilar musics together â this time blues, jazz and classical. They performed George Gershwin's Three Preludes (transcribed by Jascha Heifetz), handling the bluesy motif, syncopations and signature rhythms with obvious affection, passing a delightful melody back and forth with Gershwin-like playfulness.

Piazzollaâs canon is arguably the high-water mark of tango music. He never put his pencil down, writing around 3,000 pieces and recording around 500. Piazzolla wrote symphony, opera, musical theater, film scores, ensemble and solo works. Many of his tunes possess all the tension and release of classical music.

âFour Seasonsâ is an extended piece, moving from slow to fast and back with an accelerating tango, mounting to an arching theme. A circular melody where violin and piano loop each other, and an emotional melody that traverses the different states of love, were almost cinematic in scope. Cotik and Lin seamlessly turned all the corners of the piece and navigated the tempos like seasoned sailors.

The joy continued with âVardarito,â a happy little show tune type and âEscualo,â a delicious little tango, where the violin was racing stop and go against the piano, giving the animated duo a chance to romp. And romp they did.

Cotik and Lin received a generous standing-o at the conclusion of the compact, dramatic and unrelenting âLibertango.â Lin was on point with the opening gallop, Cotik picked up the provocative melody, and both understood each other well, as they did all evening, traversing the explosive driving rhythm of this popular concert tango.