Man, If You Can Act You Can Do It Anywhere or We Don’t Need No Stinkin’ Stage 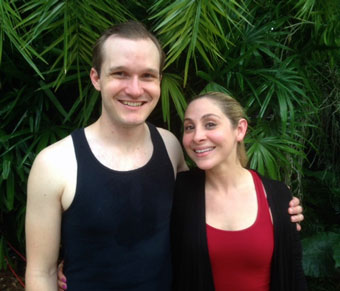 Christopher Shinnâs Dying City is a challenging piece best watched while leaning forward, perched on the edge of the seat, mouth slightly agape and eyes squinted to catch every nuance skittering through a ninety minute message that allâs not right with a young war widow, her manly dead husband reappearing in flashbacks and her husbandâs gay twin brother.

Well, no, not really. Ground Up and Rising (those who can seemingly do no wrong) spent a couple of weekends performing Dying City on the patio at the Miami Beach Botanical Garden and proved that sets and lights will never ace the talent on the boards. Or the concrete slabs, in this case.

Using two black drapes, a couple of tables and a cast iron bench as a sofa, Valentina Izarra and Christian Vandepas took the political arguments, the expository tales of off stage characters, the aches of growing, the guilt and lies, the sorrows and exaggerations of the mundane and made an evening of intense drama from this dense melange.

Izarra plays Kelly, the widow, with the resignation and quietness of bereavement that lends enthralling power to her story. Her rage and sorrow are real.

Vandenpas excels as both Peter the actor and his twin brother Craig the soldier. As Peter he is the warmly helpful brother in law, hesitant in his offerings but persistent in his tales of gay life in the theater and always with an undercurrent of his hidden agenda. His Craig is the secretive soldier, PhD candidate, proving himself in all the wrong ways.

Collin Carmouze directed and kept the pace such that the slowly fading afternoon light, the heat, the mosquitoes and noise of overhead airplanes could not distract from this performance of Dying City.

Ground Up and Rising moves this production indoors to Artistic Vibes on September 20, 21 and 27, 28.
12986 SW 89 Avenue, Miami, 33176.
Reservations: gurachin@gmail.com
http://www.groundupandrising.org/events.htm