Family Drama at the Colony Theatre 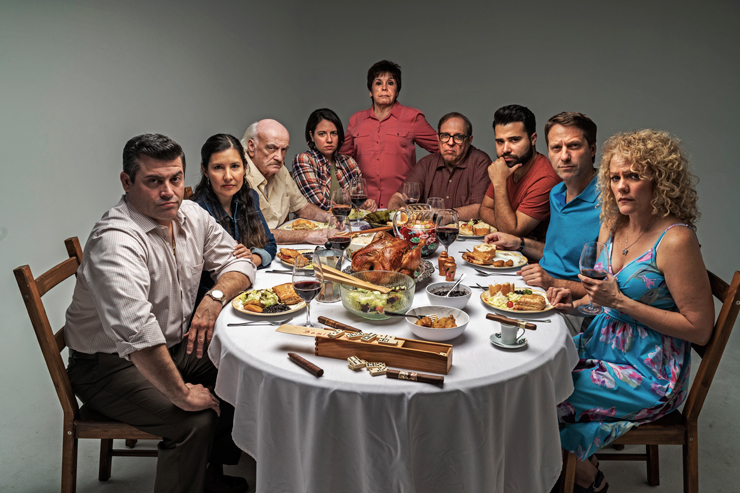 "The Cubans" is a big play about the family dynamics of an extended Cuban family. Old fashioned in a way, it has a bit of everything-Alzheimerâs disease, a gay character coming out, a failed actress, a favorite son, a crippling accident, a drunken aunt, a gringo younger boyfriend, and, at its center, the conflict between the old and the young and their feelings about Cuba.

"The Cubans," staged by Miami New Drama, had its world premiere Saturday at the Colony Theatre. Written by Florida International University graduate Michael Leon, the play is wonderfully directed by another FIU grad, Victoria Collado.

It was staged and directed in the rarely performed promenade style, with the audience seated on two sides of the playing area. Miami New Drama uses the Colony Theatreâs space well and has changed the configuration of the proscenium space as needed for different productions.

The play is in English with asides in Spanish. Except for the references about Cuba, it could have been about most any immigrant family and the conflict between the old ways, modern thinking and the changing dynamics of a family as time passes. As a world premiere, the play needs some work. The family drama is long and sometimes cumbersome with many side stories the audience is forced to follow. When the staging calls for the actors to face away from audience, it is particularly difficult to hear the dialogue, especially the character of the grandfather.

A car accident occurs off stage and then there's talk of a crushed pelvis. In the second act we learn the son is comatose, but why? Was it a brain injury?

Toward the end of the play, a tape player begins with a family memory. It is barely audible and everything onstage stops completely. Still, the audience has to strain to hear the recording.

There are, however, some very clever lines throughout. The American boyfriend talks about studying English and a Cuban character asks âwhy...werenât you born here?â

The performances by the experienced ensemble are strong. The father, played by James Puig is funny and moving. The daughter, a struggling actress, played by Ashley Alvarez rings true as the voice of today. One of the best performances is from Caleb Scott who plays the younger boyfriends of the Cuban aunt. Scott commanded the stage each time he uttered a line.

The scenic design, an older family home badly needing repairs, is remarkable. Christopher and Justin Swader have created yet another unique setting which changes dramatically over the span of two acts.