Businessman's Story Shines a Light on Morality or Lack Thereof 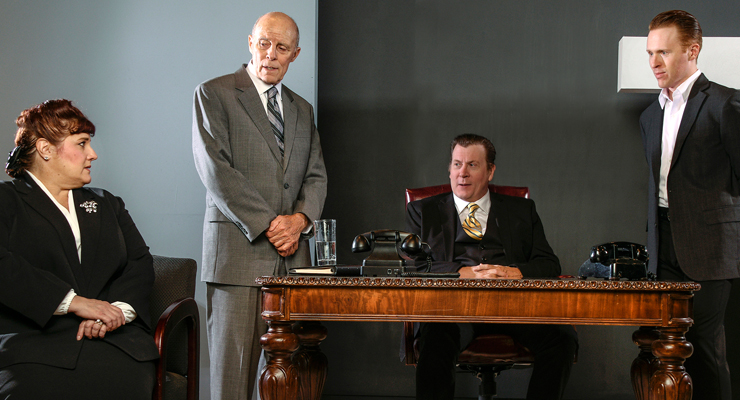 In Gablestage's "Watson," the head of a large corporation has tunnel vision when it comes to anything but success, both for himself and for his businesses, even if it means putting his American company in a precarious situation with a nefarious world leader.

Thomas John Watson wasn't one of those household names, but the company of which he was founding chairman and CEO, International Business Machines (IBM) would become one of the early entrants into the high-tech world before Silicon Valley. Today, IBM has artificial intelligence computer systems named for Watson, question-answering computer systems. Quite appropriate for the character that playwright/novelist James Grippando concocts for the world premiere of the one -play developed for GableStage by the incomparable Joseph Adler. Rarely do I use descriptive adjectives for producer/directors in reviews, but you can see Adler's handiwork not only in the direction of "Watson" but in its messages.

Putting the central character front and center (Watson is played with strength and nuance by Stephen G. Anthony), as if on political platform, Anthony as Watson introduces himself: "My name is Thomas J. Watson, and this is my story." The story is one of a businessman that believes capitalism should reign above everything else. In fact, when he receives the German Merit Cross in 1937 believing (or maybe not in earnest) that he is receiving the award because of his World Peace Through World Trade initiative, he sees the award from Adolph Hitler as nothing more than what it is purported to be â a good merit effort for his work with the International Chamber of Commerce. His conversations with the Germans are perfect, nothing to see here. No doubt there are meant to be parallels between Watson's way of thinking and the current leader of the free world.

He's the self-proclaimed Will Rogers of Awards, anyway: "I've never gotten one I didn't like," he proudly proclaims, calculating them in his head like an IBM adding machine.

Watson also is acutely aware that his punch card machines are being used by the Germans to count the number of Jews in a census to identify the immigrants with little to no skills and their lineage. Grippando calls it the world's first personal information catastrophe and how the Nazi's exploited the technology for their own gain in the era of the Holocaust.

The time and place of the one act spreads from 1890 to 1952. Some of the scenes are more effective than others, and much happens in the span of 90 minutes. Wisely, the playwright keeps Watson the singular character, while he has all the other actors play multiple roles: Peter W. Galman is, as always a standout, especially as the owner of the German based company that invented the technology, which IBM acquired, and as a Jew ordered to canvass neighborhoods to get the tabulations of Jews done for the Nazis.

Peter Haig's main character is Watson's unconditional loving personal attachÃ© who helps his boss figure out how he should address the fuhrer; Haig plays other minor characters. Barry Tarallo plays a multitude of supporting characters. Margot Moreland's primary role is of Watson's happy then unhappy "I want a divorce" wife. Diana Garle is a poor young Jewish mother being asked questions she doesn't understand for the census, then an executive secretary, then wife to Thomas Watson Jr. Once in a while, she and Moreland march on stage to sing an IBM motto song to the tune of Over There. It is interestingly done as they start out as chirpy, happy and dedicated to the IBM message d to cynical and snarky with less pep in their step by their third chorus near the finale.

Iain Batchelor plays Thomas Watson Jr. as his father's adversary â the moral compass to Pop's lack of morality, in a sense. The real-life Watson would go down in history as Fortune magazine's "most successful capitalist who ever lived." Watching Batchelor and Anthony go toe to toe is a highlight as they argue over transparency and lack thereof. Batchelor's Playbill resume says he just arrived in the States from London. Lucky for South Florida audiences, "Watson" marks his U.S. stage debut. 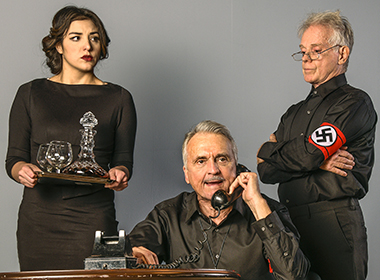 Anthony has a heavy load to carry in this character. He's given much dialogue and the character frequently finds himself in the midst of debate, whether it is with his son, the owner of the subsidiary in Germany, or his wife. There's also much exposition, too much sometimes, as Watson's character is the one who must fill us in on the complex inner workings of punch cards and data processing machinery. And, among other pithy messages, his rules for success: No alcohol, dress for success, patent everything because it puts people on notice. Anthony has the audience buying Watson's philosophy hook, line and sinker. Can someone be that tunnel visioned in their view of the world? Anthony's Watson will make you wonder if, in fact, someone with so many people around them providing other points of view could stay so stuck in their ways.

Written by Grippando, the author of 28 novels and an adjunction professor at the University of Miami School of Law, this is his first outing as a play. The structure sometimes falls into book territory, i.e. too cerebral and expository. There are places that could use some tightening up, along with confusing scenes that are arbitrary â do we need a scene where wifey announces "I want a divorce!" or the set up where a young Watson in Buffalo, N.Y., has sewing machines stolen while he's getting drunk as a skunk in a pub? The elements are necessary, the scenes seem elementary.

For the show to have a reach beyond Jewish audiences, or those not much interested in history, there needs to be some more dynamics in the messaging: the relationship between a stern father and the softer son he's trying to groom, the blind climb of capitalism above family and morality. These themes are packed in "Watson" but never seem to rise above the piece of history that has been memorialized plenty. There is something to be said for the education about Watson, a man whose story may not have mattered who been told previously, but made a difference in the Holocaust, no doubt. "Watson" will have you (as I did) Googling Watson and his legacy.

Lyle Baskin's set design with Watson's motto THINK upstage center in big silver letters spelled out sets a solid tone â Watson's office on stage right is where the action in the U.S. takes place. Stage right is reserved for Berlin and Warsaw. It creates a great and perfect divide. Projections on the back walls on both sides show period photos and video of Nazi Germany, Jewish businesses vandalized and disturbing images of people in different states of unwellness.

Emil White's costumes keep the neutral color palette of the set, and lighting design by Steve Welsh bathes the stage in colors that give the play a nostalgic ambiance. Matt Corey designed the impeccable sound.