GableStage's 'We Will Not Be Silent' Speaks Volumes 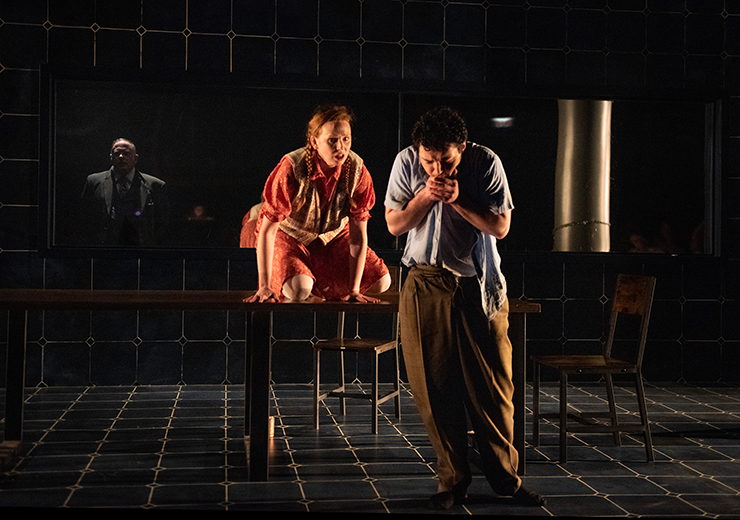 Would you die for your convictions?

Perhaps you have never considered this question. But, rest assured, David Meyersâ relevant, riveting, and, at times, relentless psychological thriller, âWe Will Not Be Silentâ will cause the question to reverberate in your mind long after you have left the theater.

Meyersâ play, as gripping as a John Grisham page turner, is receiving a stellar South Florida production by GableStage in Coral Gables through Jan. 29. The companyâs intimate playing space, and the incredible skill of mega-talented actors, combine to create a 90-minute breathtakingly intense and believable intermission-less theatrical experience.Â

Under GableStage Producing Artistic Director Bari Newportâs sensitive direction and expert pacing, the performers present a master class in naturalistic acting. In fact, the actors disappear into their well-drawn characters.

You may not have heard of siblings Sophie and Hans Scholl. Kudos, then, to Meyers and GableStage, as well as other companies that have staged the play, for telling the siblingsâ heroic story of courage and defiance, truth, faith, honor, and integrity. Indeed, it is a true tale that everyone needs to hear. That is especially true with hatred and violence spreading through society like an aggressive form of cancer overtaking a human body. The Scholl siblings were ordinary people taking extraordinary action during a pivotal time in history.

More specifically, Sophie and Hans were key members of the White Rose resistance group during World War II. University of Munich students founded the group. Its members distributed leaflets and used graffiti to decry Nazi crimes and the political system while calling for resistance to the Nazi state and the war. The students, like many young people are doing today, took a stand. 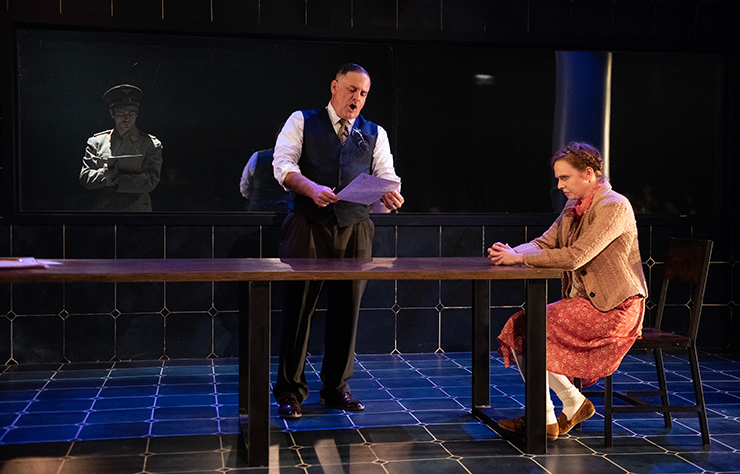 Sophie Scholl (Meredith Casey) sits in defiance as Kurt Grunwald (Jason Peck) reads something to her. Outside, a guard watches. (Photo by Magnus Stark)

Fortunately, Meyers does not bog his play down with historical facts and distracting subplots. Instead, the playwright tells a taut, laser-focused true tale with life-and-death stakes. Indeed, if a court finds the siblings guilty of treason, they will receive the death penalty.

The setting is a prison cell in Munich in February 1943. When the play opens, authorities have just arrested Sophie (Meredith Casey) after catching her allegedly spreading leaflets encouraging Germans to rebel against the Nazis. Meanwhile, authorities caught and arrested Hans and accused him of conducting similar activities. Prison guards keep the siblings in separate cells.

Throughout the play, Kurt Grunwald (Jason Peck), a Nazi police officer, interrogates Sophie in connection with her alleged involvement with the White Rose resistance group. As the officer grows increasingly more aggressive in his questioning, Sophie must consider how much she values her life and weigh that against how strongly she believes in her convictions.

Sophieâs situation brings to mind John Proctor in Arthur Millerâs masterpiece, âThe Crucible.â As you may recall, that play is a 1953 work dramatizing and partially fictionalizing the true story of the Salem witchcraft trials. They took place in the Massachusetts Bay Colony during the 1600s. Authorities reportedly accused more than 200 people of practicing witchcraft and executed 20. 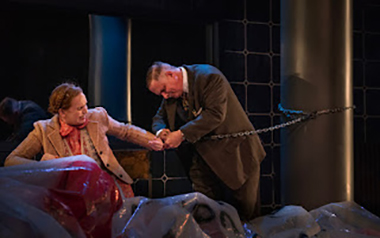 Proctor speaks powerful lines at the end of âThe Crucible.â That is when he wrestles with his conscience over whether to confess to witchcraft and save his life, or die but preserve his integrity and good name.

âHow may I live without my name?â Proctor pleads with Salem authorities. âI have given you my soul; leave me my name!â

Sophie also fights to stay alive while, at the same time, seeking to preserve her good name.

Consider, for example, the following exchange:

Grunwald: You must renounce your membership in The White Roseâ¦and pledge your allegiance to Hitler. Itâs just words, Sophie. They mean nothing.

Sophie: They mean everything...And thatâs it? To say that Iâm sorry â that I love Hitler? Fine. I said it. You can tell them that I-

Grunwald: You must say it publicly.

Grunwald: You must make a public statement. On the radio, in the newspapersâ¦

But if Grunwald sounds heartless â and he does sound like a ruthless figure at timesÂ â Meyers also presents a human, vulnerable side of him as well. By doing so, the playwright creates a fully-realized, three-dimensional character. In addition, Meyersâ depiction of Grunwald reminds us that there are varying degrees of evil in this world and that human beings are complex.

True, Grunwald is an officer enforcing the law as it exists under Nazi rule and he becomes violent with Sophie. He may even be a Nazi himself. But if you listen to him at times, he does not come across as the âworst of the worst.â Consequently, our opinion of Grunwald shifts during the course of the play.

Peck deftly depicts Grunwald on the stage as Meyers depicted the character on the page. At times, Peckâs Grunwald thunderously yells at Sophie, grabbing her by the shirt, violently backing her up against a wall, and screaming in her face. Sometimes, the actor punctuates his characterâs rough words with forceful actions, such as slamming an object on the ground. But Peck also finds the officerâs softer side, speaking in a sympathetic tone and even chuckling, but in a reassuring manner. During these moments, Meyers forces us to see not a monster, but, for instance, a father who lost his son.

Casey disappears into Sophieâs skin. The performer paints a vivid picture of a wary woman who is also vehement and unbending in her beliefs and convictions. During such moments, Sophie lowers her eyebrows and quickly turns her head away from Grunwald in an abrupt action suggesting defiance. At other times, Caseyâs entire body shakes in anguish as Grunwald tears into her. Watching them, you actually grow concerned that Grunwald may hurt Sophie, and you want to protect her. Remarkably, it all looks and sounds natural.

When Caseyâs Sophie is not visibly shaking, she is screaming frantically, pleading for her life. While Casey leaves no doubt that Sophie cares greatly about preserving her good name, the performer also makes it abundantly clear that Sophie loves life; she does not want to die. In fact, she dreads death.

Casey, as Sophie, and Bobby Eddy as compassionate and tender Hans, convince us that their characters are close, loving siblings who have shared many happy moments. They lean on each other and hug each other in a loving manner, looking and sounding like siblings who are inseparable.

Under Newportâs careful direction, highly-charged scenes contrast markedly with tender, quieter moments. While GableStageâs playing space is wide, Newport ensures that all audience members can see the entire action. In addition, the director positions the actors appropriately, including impactful pauses.

Peck, who also serves as the sound designer, has created discordant, harsh-sounding noises, especially during a scene that involves a disturbing dream. Such sounds enhance the darkness, tension, and disturbing quality of the play. Before scenes begin, we hear a cacophony of voices encouraging resistance against the Nazis. These voices build in intensity until they reach a crescendo. Then, bam, the lights come up, and as they do, we hear what sounds like a prison gate slamming. We also hear the gate shutting sound effect to end scenes, as the lights go out.

Speaking of lighting, Victoria Murawskiâs design enhances the playâs realism. Sometimes, the lights shine harshly, perhaps reinforcing the playâs serious nature. In addition, an effect in which the lights blink on and off enhances the nightmarish quality of one scene.

The actors perform on Frank J. Olivaâs dark, stark, and severe-looking set design of the Munich prison. The dark set contrasts markedly with the pink costume that Sophie wears (Camilla Haith designed the character-appropriate costumes). The set is windowless. There is, however, a mirror through which we can see a guard watching Sophieâs cell. This lends a sense of claustrophobia to the action.

The world may be dark, this play seems to say, but we each have an opportunity to serve as shining lights of reason and reform. We can shine such brightness into the world by using our voices.

In some instances, silence is golden. In others, silence is deadly -- and makes us complicit in the evil of the world.

GableStageâs production of âWe Will Not Be Silentâ runs through Jan. 29 at 1200 Anastasia Ave. at the Biltmore Hotel in Coral Gables. Showtimes are at 8 p.m. Thursdays, Fridays and Saturdays, 2 p.m. and 7 p.m. on Wednesdays, and 2 p.m. Sundays. In addition to performances, GableStage has scheduled a wide array of special events in connection with the show.Â In addition to in-person performances, you can stream this and other GableStage productions.