Get Ready To Check In To Wild 'Zoo Motel' 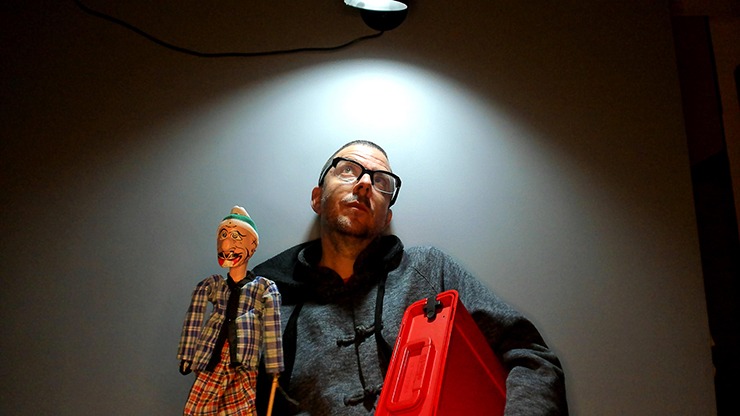 In June 2109, I interviewed Thaddeus Phillips who has had an ongoing relationship with Miami Light Project.

Well, we all know what happened this summer.

But Phillips is not one to stay out of the writing and performing limelight, so, from afar, he is presenting a World Premiere, again with Miami Light Project.

This time he's at his studio in Cajica, Colombia, and will present "Zoo Motel" as a live remote and interactive theatrical experience. The design should be just as spectacular as the production. It's by Obie and Bessie award winning artist, Steven Dufala (set designer for "Home" and "The Object Lesson").

So here's how participating in the Zoo goes.

Audiences purchase a ticket for "Zoo Motel" and reserve one of 21 rooms in the motel. An email file is sent, which includes a printable room key, a take out menu and a fold able set piece. (Make sure you have a printer nearby.)

Then, 30 minutes before show time, a clerk checks you in to your room. The interactive fun begins when Phillips enters his own room, which has an unexplainable connection to the other 21.

Then, let the interactive fun begin.

âThaddeus and Steven have come up with a combined use of theater and film that is a one-of-a kind hybrid only possible in this format. 'Zoo Motel' is a fun, inventive, and evocative work that could only have been conceived during this global crisis, and is an example of the creativity that has sprung from it,"Â  says Beth Boone, Miami Light projectâs artistic and executive director.

As many performing arts companies have said, there has been positives to working in a virtual space and Boone agrees.

"What is also so exciting about this work is that it is going to be performed and broadcast live from South America and can reach audiences not only in Miami but also in New York, Philadelphia, Chicago, Los Angeles, and really anywhere in the world.â

Phillips' Studio in Cajica, Colombia, is in a village outside of Bogota. Colombia remains in one of the world's strictest quarantines, and Phillips can only venture outside on Wednesdays for 3 hours to get essentials.

"Zoo Motel" has been created via an intricate and compacted logistical puzzle in order to send materials and set pieces from Dufala's studio in Philadelphia to Phillips' studio in South America.

"This show is about connection and disconnection, or rather our connections in the current disconnection. The Earth, seen from space, especially now, is like a huge zoo, and the planet a motel of sorts â a place we all get to visit for a while," says Phillips.

Phillips and Dufala have transformed Phillips' studio into a fictional motel room that could be anywhere on Earth and fitted it with a central rotating camera that allows for a constantly moving and shifting perspective and an array of magic, transformations and surprises.

The performance artists stages and shoots the show live, interacting with audiences while re-imagining his signature stage craft to the new format.

Phillips said audience members will see that there is significant inspiration from the cinematic work of Orson Welles and the theatrical wizardry of Robert Lepage, with whom Phillips has collaborated.

Director Tatiana Mallarino (that's his wife) has been in quarantine with Phillips, and directs by watching the work on a monitor as if on a movie set.

New York Cityâs famed sleight of hand master, Steve Cuiffo has been training Phillips over Skype in various magic tricks designed especially for Zoo Motel and the Spanish/Ukrainian dancing team of Fernando and Katya have been sending choreographies for Phillips via Instagram from Madrid.

âI was directing a show about the climate crisis, and in fact, pandemics in Madrid in February of 2020, and in trying to get back to the Americas, my flight had to stop in Iceland where we stayed for a night in this quite odd motel. I took many notes on the motel stationary, just as the world was about to change, and they became this project. Thus the idea behind the show is to play with large scale ideas from the confines of a small motel room. The room itself is a portal, a place in which planes have suddenly stopped, passports invalid and time stands still, and from that, something new and magical fights to emerge."

Phillips says that "Zoo Motel" feels and flows like a live movie, "yet it has the intimacy and rough magic of a theater work."

Zoo Motel is the third collaboration between Phillips and Miami Light Project.

In 2015, "17 Border Crossings" was presented at The Light Box at Goldman Warehouse and in 2019, the world premiere of "Inflatable Space" was commissioned and presented at the historic Colony Theatre in Miami Beach, Florida.

Given the unique nature and logistics of this production, it is ideal to have a printer and print materials before the show. An email will be sent with a âZOO MOTEL WELCOME PACKâ PDF, specifically designed by artist Steven Dufala, to be printed and prepared before the show.