Ghosts and the Slightly Damaged 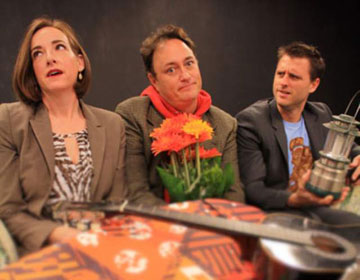 Uncertain Terms is a sweet little play and that's not quite as insulting as it sounds. Gentleness abounds in the story of a house and its memories now having its world premiere at Arts Garage.

Well directed by Lou Tyrell and with a can't fail cast, Uncertain Terms is sometimes mystifying but always interesting.Â  A chain smoking, wig swapping ghost and her daughters' extraordinarily weird former husband are high on the ooh look list.

Harry may be crazy (his demented duck impression will keep you awake and rigid in your beds long after midnight) and he may be sane.Â  Who's to tell?Â  Not me.Â  His ex wife is Dani, Carol's daughter and frustrated business woman who, with her low flying high scheming brother Matthew, wants to sell Carol's house. Erin Joy Schmidt is Dani and Matt Stabile is her brother.Â  Elizabeth Dimon is Paula, the desperately would-be hot shot real estate agent to whom the house becomes more than she could ever imagine.

Jody-Ann Henry is Tawnee Faithful the young girl who has Harry in her soul.

Uncertain Terms is a many monologued piece delivered brilliantly by these actors.

The ghost on the stage is not without its difficulties; hard to tell at times whether we're in a flashback or just the usual ethereal aspect of I can see you but you can't see me.Â  But that doesn't really matter because playwright Allison Gregory has created characters about whom we care.Â  Nice, nice stuff.