Heartfelt 'I Carry You With Me' Chronicles Real-Life Gay Romance 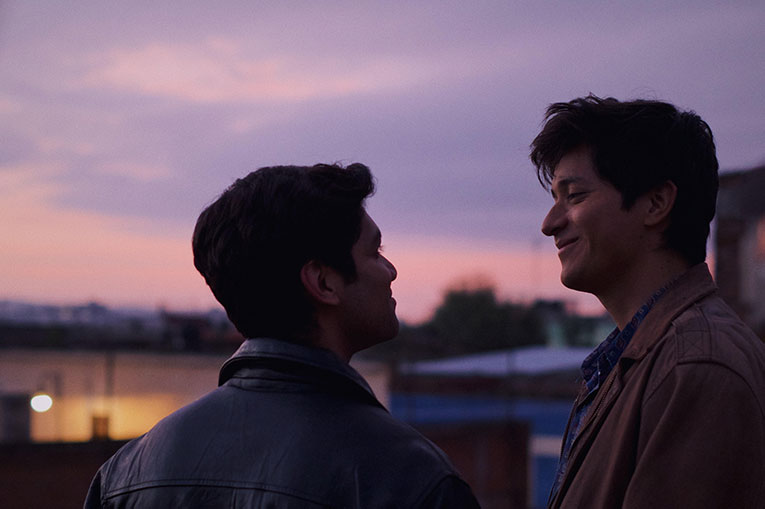 Christian VÃ¡zquez as Gerardo and Armando Espitia as IvÃ¡n in a scene from "I Carry You with Me." Photo by Alejandro Lopez Pineda. Courtesy of Sony Pictures Classics.

There's a moment halfway through âI Carry You with Meâ that takes up about a minute of screen time but speaks volumes. Two friends are beaten on the streets of a Mexican city just because they're gay, and what makes the scene more potent is how the victims react: not with defiance, but with nonchalant resignation. Bruised and bloodied, they help each other up and leave. Because, it's implied, that's just the way things are.

The scene is brief in the overall tapestry of resilience, tenacity and enduring love that comprises documentarian Heidi Ewing's decades-spanning fiction debut, but it's emblematic of her clear-eyed approach to the film's intersecting portraits of being gay in Mexico and the plight of undocumented immigrants striving to find a better life north of the border. What's bewitching about this docudrama, other than its seamless nonlinear structure, is how it fuses both subjects and finds that they're part of the same struggle for human rights. 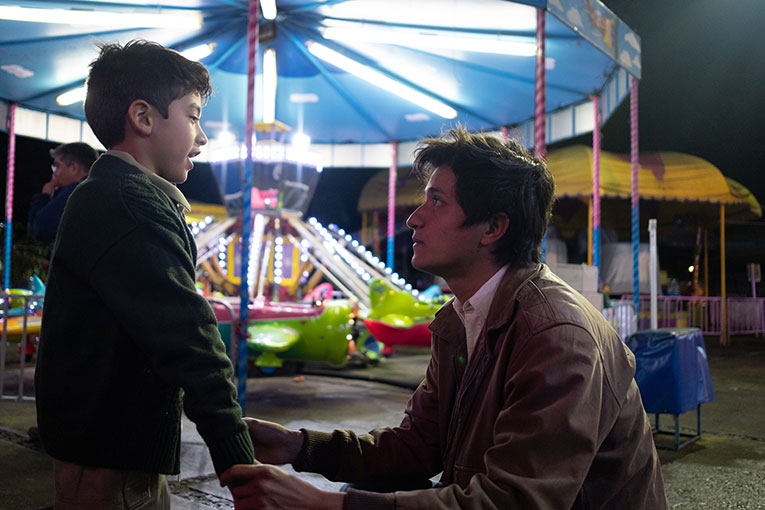 Jose Angel Garrido as Young Ricky and Armando Espitia as IvÃ¡n in a scene from "I Carry You with Me." Photo by Alejandro Lopez Pineda. Courtesy of Sony Pictures Classics.

And yet, âI Carry You with Meâ rarely feels like an issue film. In fact, this is a personal undertaking for Ewing, who is telling her story of her longtime friends IvÃ¡n Garcia and Gerardo Zabaleta, how they met and fell in love in Puebla in the mid-1990s, when the environment was hostile for gay men but nevertheless fostered a thriving nightlife that enabled the men to meet. IvÃ¡n (Armando Espitia) an aspiring chef stuck in a dead-end job as a busboy, is smitten with Gerardo (Christian VÃ¡zquez), a local teacher, right away. You'll probably find yourself smiling and nodding in recognition: the easygoing banter, the playful ribbing, the relaxed body language. The young men have just met, but it feels as if they've known each other for years.

The rendezvous leads up to a kiss, a deep, satisfying rooftop kiss with picturesque Puebla as their backdrop. It's a grand, sweeping moment that belies the modesty of this U.S.-Mexico co-production. Ewing also dramatizes the relationship between IvÃ¡n and his son, and the inner struggle IvÃ¡n faces as he tries to reconcile his duties as a father with the undeniable bond he's formed with Gerardo, who is more comfortable in his own skin and better adjusted about the fact that he likes men. Ewing is also interested in depicting IvÃ¡n's culinary gifts, including a delightful anecdote about he persuaded the nuns in a local convent to reveal their recipe for mole poblano. 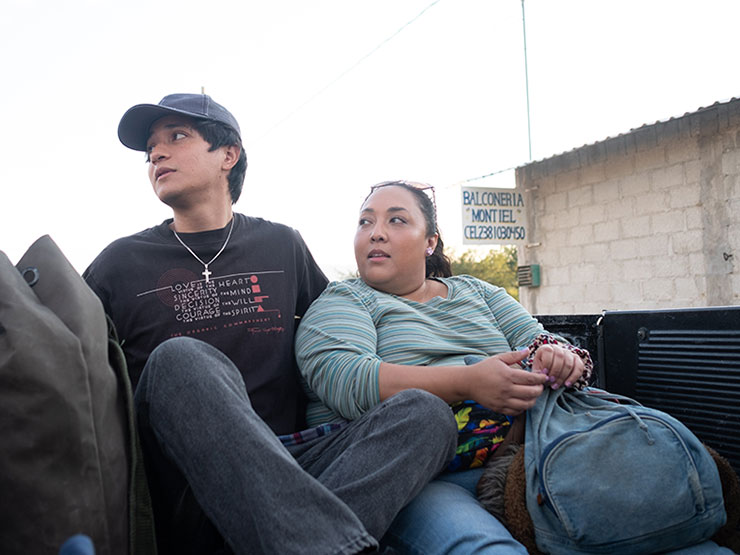 Armando Espitia as IvÃ¡n and Michelle Rodriguez as Sandra in a scene from "I Carry You with Me." Photo by Alejandro Lopez Pineda. Courtesy of Sony Pictures Classics.

As the years pass, and IvÃ¡n decides to make the perilous trek across the border with childhood bestie Sandra (TV vet Michelle RodrÃ­guez), âI Carry You with Meâ glides backwards and forward in time for a glimpse at IvÃ¡n and Gerardo's younger selves, and how their parents dealt with their sexual orientation in contrasting ways. It's familiar subject matter, yet rendered in a way that feels vibrant and fresh. Aided by cinematographer Juan Pablo RamÃ­rez's ceaselessly roving camerawork, Ewing's visual curiosity and her attention to detail turns this mÃ©lange of past and present into an absorbing narrative that aims to come across as memories come to life. The shooting style, a lyrical naturalism grounded in the day-to-day, is reminiscent of directors like ChloÃ© Zhao or Florida's own Victor NuÃ±ez in the way it immerses viewers in the lives of working class people who strive to find their place in the world. 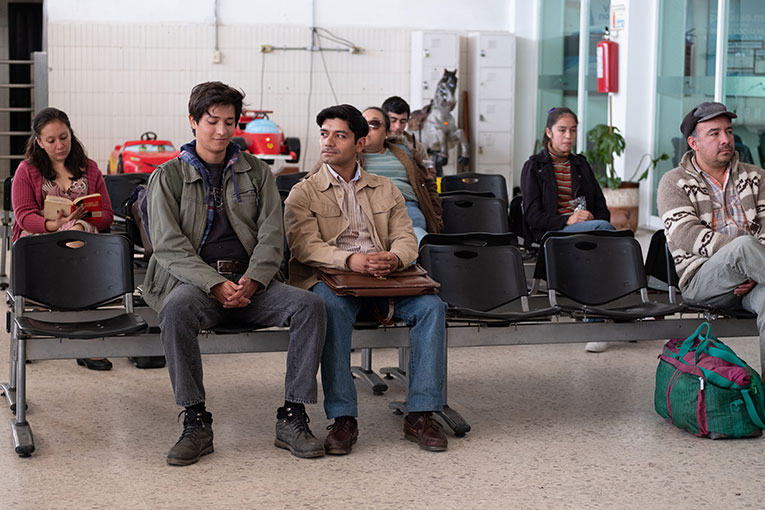 Armando Espitia as IvÃ¡n and Christian VÃ¡zquez as Gerardo in a scene from "I Carry You with Me." Photo by Alejandro Lopez Pineda. Courtesy of Sony Pictures Classics.

The film was originally envisioned as a conventional documentary before Ewing intuited that a dramatic feature would be the most efficient way to tell the couple's story. Its final quarter is mostly taken up by nonfiction footage of the real-life subjects. IvÃ¡n, as it turns out, overcame years of hardship in New York City. As for how well he's done for himself and how he reconnects with Gerardo, that's something I'll leave for you to discover. Suffice it to say that these men grapple with tough decisions regarding their home country and those they left behind. 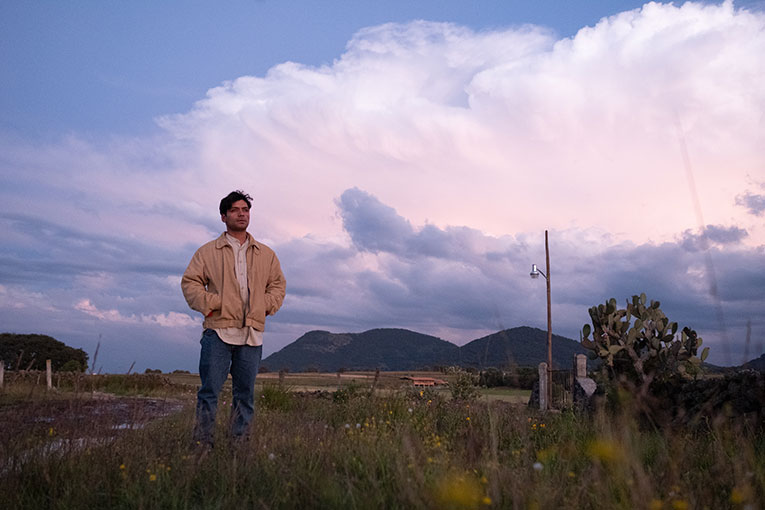 Christian VÃ¡zquez as Gerardo in a scene from "I Carry You with Me." Photo by Alejandro Lopez Pineda. Courtesy of Sony Pictures Classics.

In her past work, like the engrossing Oscar-nominated documentary âJesus Camp,â Ewing has excelled in putting a human face to marginalized figures, finding empathy in places where other filmmakers would merely see topical fodder. By imbuing âI Carry You with Meâ with richly textured intimacy, she's made a movie to savor, for foodies and romantics alike, a portrait of the American dream where unconditional love is the light that shows you the way home, no matter how hard that road can be.

âI Carry You with Meâ is now showing at the Tower Theater in Little Havana, Regal Cinemas South Beach, Gateway Cinema in Fort Lauderdale and Living Room Theaters in Boca Raton. It had its world premiere at the 2020 Sundance Festival, where it won the NEXT Innovator Award and the Best of NEXT Audience Award. This past November, it screened at the Key West Film Festival, where it won the Critics' Choice Award. 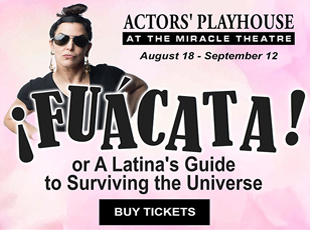