'Miami Motel Stories' Moves Into Another Neighborhood for Immersive Theater 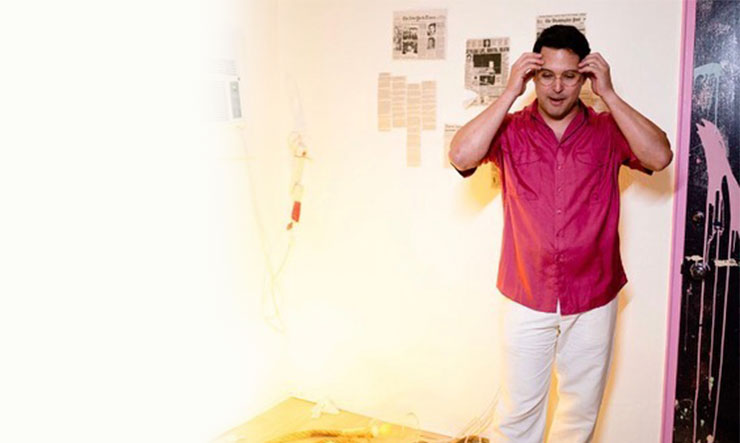 The lobby of the Broadmoor Hotel, 7450 Ocean Terrace, Miami Beach, formerly known as "The Broadmoor By the Sea" in the 1950s, is the first stop in the latest version of "Miami Motel Stories."Â

A spacious lobby with beautiful terrazzo floors, comfortable period chairs and a working pay phone greets the audience as they are given their "assigned track" indicating by a colored tag with a number.

The crowd, a good mixture of all ages, was given rules at curtain time about the stories we were about to see. My favorite instruction? âDonât touch the actors.â Our assistant guided us and tested our knowledge of the rules as we were escorted down Ocean Terrace to a building that stated âNo Trespassing,â but in we went. An assorted group of characters greeted us, as we (those on the pink track) were whisked upstairs into the makeup room as rehearsals were about to begin for a film.

April (Sandi Stock) a frustrated actress assigned to makeup, hair and costumes, fumed about not getting a part in the film as she readied some of the actors. Dressed as a typical tech in black, people came and went, wanting April to do more and more jobs on the film. (For those with sensitive ears, the F word flew around like a pesky seagull.) Throughout the performance we were brought back to visit with April who showed more and more of her talent, and her grief and sadness at not getting a part in the film.

At the first rehearsal we were greeted by a good-looking man and invited into his room. It was decorated with a few seaworthy objects and newspaper articles taped to the walls. Versace killer Andrew Cunanan (Charles Sothers) told us about his life and the path that took him to North Beach. At first he seemed sweet, but as his monologue developed and the lies began, the audience members (five of us) began to lean away from him. By the time he was lying on the floor and telling us to get out of his room, we were halfway out the door. Sothers was a chameleon as he changed from easy going to menacing. He was creepy.

After visiting with April a second time, we were escorted across the hall to meet newlyweds Mr. and Mrs. Schulman (Robert Fritz and Amy Coker), who were ending their week long honeymoon in Miami Beach. She wanted to stay in paradise; he felt they had to go back to New York where they had obligations. Somehow the script seemed familiar and it didnât have much of an arc. But the actors handled it well, and certainly looked their parts. 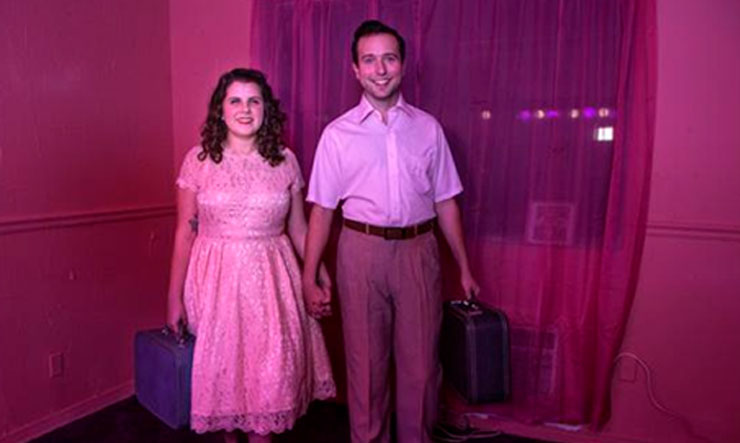 Back to Sandi Stockâs April in the costume room for the third time, she was even more frustrated. She sang us a variety of numbers to show us her vocal range and style. She was later joined by Andrew Cunanan as a backup singer. She became determined to impress Lenny, the Director (Alex Alvarez) that she had the talent to be in his film.

Then we met Gibbs, the charismatic shoe man (Bruno Luckner). He told us about his life going to work with his father and the people he saw and the shoes they wore. About as a young boy he had to hide in a closet because he wasnât allowed to be on the beach, especially after dark. Gibbs was humorous and melancholy remembering his life. And we got a chance to go into his shoe closet.

Going back to Sandi Stockâs April, we were shocked at the transformation made by her, as she was beautifully coiffed and gowned as a surprise for Lenny, the director. We the audience, walked down the hall hiding her until told to make an opening. She then vamped forward and posed for Lenny who was delighted by her transformation.

At the end, after a short dance by the cast, we were brought down to an outdoor space where photos could be taken and drinks ordered.

The scripts were well researched and written by Juan Sanchez. The directors (Ana Margineanu and Tai Thompson) and their stage managers coordinated over 25 actors in 18 rooms, and moved the crowd through various spaces during the night while never getting the audience confused.

"Miami Motel Stories" is a unique approach to storytelling and performance. The location in North Beach, which will change dramatically in a year or so with new development plans, is worth exploring now while the old North Beach is still there.