The O'Haras are suffering from an acute case of transatlantic blues. From a distance, they might look like the ideal nuclear family: a handsome and astute money man; his sharp, no-nonsense wife; her bright teenage daughter (not his); and a shy, floppy-haired tyke who's the apple of Mommy's and Daddy's eyes. The O'Haras were not only a photogenic clan. They used to be close-knit in that unspoken way families who have it mostly figured out act around each other. But now they're staring daggers and can't stand being in the same room, even if their current, obscenely vast abode gives them several starter homes' worth of personal space. 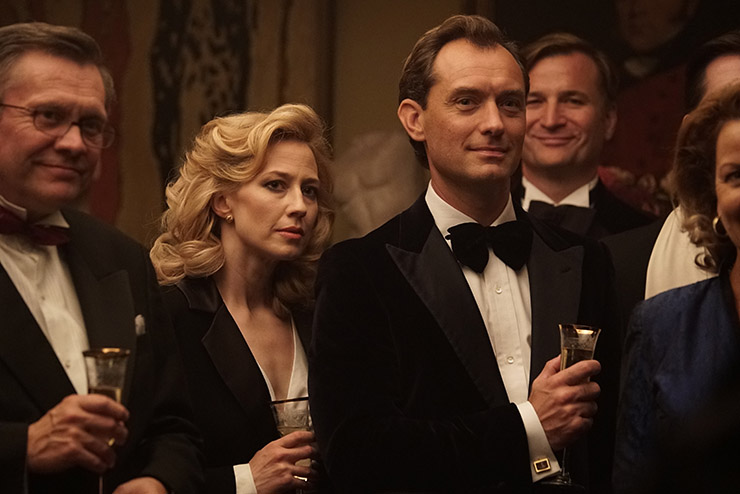 Jude Law as Rory and Carrie Coon as Allison in Sean Durkin's "The Nest." Photo/Courtesy of IFC Films.

You're probably wondering, how did it all go wrong? The answer is a little complicated, in the way nuanced, richly layered domestic dramas like âThe Nestâ are, but let me take a stab at explaining. You see, Allison (that would be Mommy in this scenario) has figured out Rory (aka Daddy) is a hustler and two-time loser whose head for business opportunities acts as an effective smoke screen for chronic, irresponsible risk-taking. That lilting baritone, coupled with his irresistible English accent, may have proven to be irresistible at one time, but that all changed when he talked her into moving across the pond.

The year is 1986. Reagan's on his second term and Thatcher is still four years from her resignation as prime minister. The hair is big, but the Wall Street investments are bigger. And Rory O'Hara (Jude Law), a Brit living in suburban New York, is keen on pouncing on the cool cash that the deregulation back home could bring him, if he plays his cards right. Maybe all that driving with the steering wheel on the wrong side of the car and all the other Americanisms he finds off-putting won't all have been for nothing.

Not so fast, says Allison (âThe Leftovers'â Carrie Coon, coiffed blonde), a horse trainer who wastes no time in letting him know her gut is virtually screaming into her ear that uprooting the family, their fourth move in ten years if she goes along with this, is a very bad idea. But see, this is all before she figured out he's not the dreamboat he sold himself as. And so, a couple of pep talks later, off they go, her daughter Samantha (Oona Roche) and their shy, floppy-haired son Benjamin (Charlie Shotwell) in tow. Rory then introduces his loving but skeptical wife and children to what ends up being an important supporting character in the film: a sprawling manor in Surrey, about an hour away from London, that's in a questionable state of disrepair but still manages to be awe-inspiring. At least when it's not creeping you out. 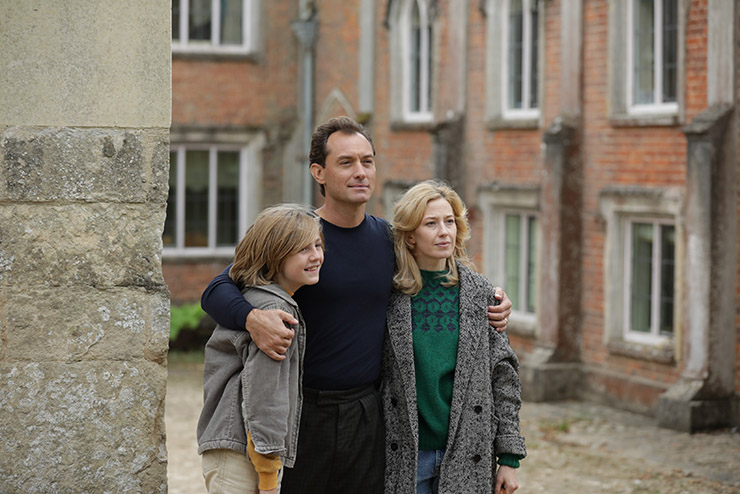 Jude Law as Rory, Carrie Coon as Allison and Charlie Shotwell as Benjamin in Sean Durkin's "The Nest." Photo/Courtesy of IFC Films.

That's when the warmth begins to seep out of this household, and that's when writer-director Sean Durkin slowly but inexorably turns the screws, on the O'Haras and the viewer. With âThe Nest,â the Canadian-born, English-bred filmmaker has made a portrait of marital malaise with the disquieting unease one would expect from a Roman Polanski film. This is a haunted house film where the ghosts, if there are any, can't be bothered to make life hell for their flesh-and-blood intruders. After all, they're doing a decent job of that all by themselves.

At its decaying core, âThe Nestâ is a film about displacement: geographical, temporal and emotional. Working from his screenplay, which seamlessly doles out exposition in spurts but relies more on what's left unsaid, Durkin shows complete formal control of the medium: in those Altman-esque zooms, that burnished palette that sometimes make the film resemble a photograph from the 1980s come to life, and in those lingering pauses that can heighten the tension or convey isolation. And when you feel helpless inside a chilly, cavernous mansion out in the country, that despair can swoop in and shroud you in darkness.

In Allison's case, that darkness takes the shape of Richmond, her beautiful horse, traumatized by his journey across the Atlantic. Animal lovers are hereby warned: what happens to poor Richmond is not pretty. Does Durkin err by striking a rather obvious parallel between the horse's suffering and the deterioration of his owners' marriage? Perhaps, but the animal's transformation from majestic creature to broken bundle of nerves still managed to get under my skin. 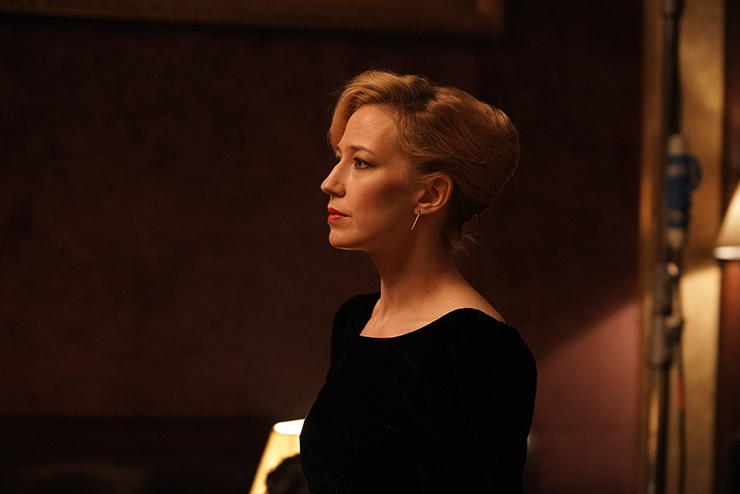 Carrie Coon as Allison in Sean Durkin's "The Nest." Photo/Courtesy of IFC Films.

Juxtaposed with the brooding menace of the scenes at the manor, âThe Nestâ is also a movie about wannabe Masters of the Universe sitting in offices and talking money. It sometimes feels as if novelist Tom Wolfe had scripted a Douglas Sirk melodrama. Rory, a former commodities broker, agrees to take a job at his old firm, where he proceeds to try to talk his boss Arthur (âThe Crown'sâ Michael Culkin) into negotiating the sale of the company to a U.S. corporation. The moolah will be rolling in like manna from heaven, he assures his former mentor. It doesn't take a financial expert to tell Rory's on the hustle, with the stability and well-being of his wife and children hanging in the balance.

Durkin, as he showed in his brilliant cult runaway chiller âMartha Marcy May Marlene,â is in no hurry to tell this tale of familial woes, and the slow-burn approach pays off handsomely here as well. The characters' unhappiness begins to show in ways both expected and jarring. An increasingly sullen Samantha lashes out by blaring her stereo (remember those?) and inviting older teens over without permission. It all builds up to a rather eventful night where Samantha is left home alone while Rory takes Allison to London for a business dinner that takes some spectacular cringe-inducing turns.

This is where Coon, whose performance has heretofore been a model of restraint, allows Allison to express her pent-up resentment. It's exquisitely calibrated work from a performer who merits year-end recognition along with buzzier contenders. Law has the disadvantage of playing the more unsympathetic character, but neither he nor Durkin shy away from Rory's sense of decency underneath his destructive compulsions. 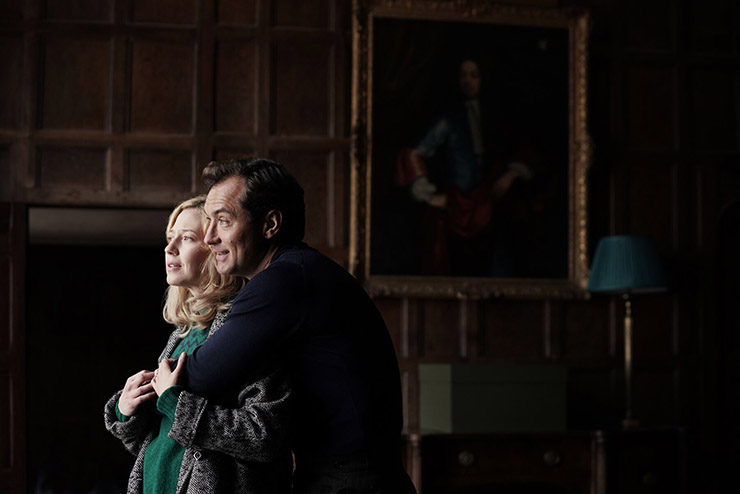 Jude Law as Rory and Carrie Coon as Allison in Sean Durkin's "The Nest." Photo/Courtesy of IFC Films.

And just when you think âThe Nestâ is taking you on a one-way trip to witness the unraveling of the O'Haras, Durkin wisely resists the urge to fully embrace nihilism the way one would expect from, say. Michael Haneke and Yorgos Lanthimos. âThe Nest'sâ dark clouds come with a silver lining, and its open-ended (but sneakily optimistic?) resolution makes this prickly pear of a movie the last thing this reviewer could have imagined: life-affirming.

âThe Nestâ is now showing in theaters in Broward and newly reopened auditoriums in Miami-Dade, including the IPIC Theaters in North Miami Beach and the Silverspot Cinema in Coconut Creek. It is expected to become available on demand later this year.