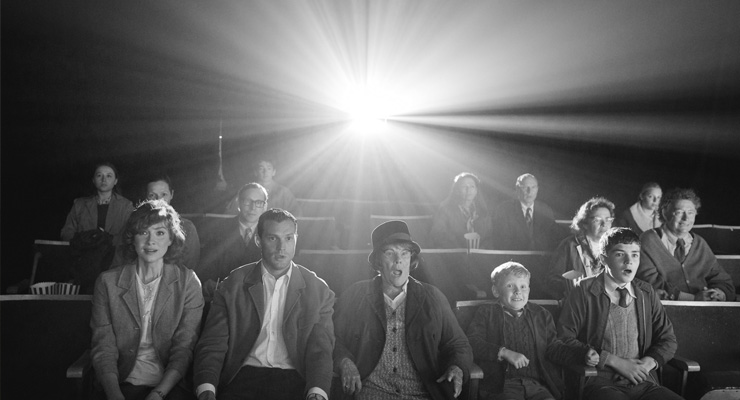 The news on the telly is not good. Violence on the streets. Neighbor turning on neighbor. Molotov cocktails going kaboom. Shattered storefronts. The discord is steadily spiraling into chaos. 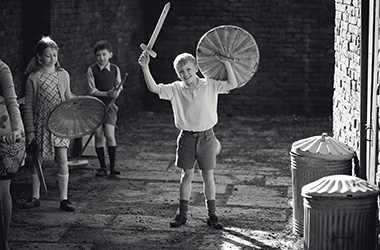 Jude Hill in a scene from "Belfast." Photo courtesy of Focus Features.

Buddy ought to know. It feels as if his street has become ground zero for this pointed disagreement between Catholics, aka the folks on the other side of this tiff, and Protestants (he and his big family). But the wide-eyed moppet has other worries occupying his mind, such as figuring out long division and whether he will be able to muster up the courage to ask his cute classmate to work on a project together.

Welcome to Belfast, circa August 1969, or at least Kenneth Branagh's monochromatic, aggressively idealized portrait of a city besieged by a conflict with no apparent end in sight. The images have a silvery sheen, but the perspective is decidedly rose-colored. It's the kind of sentimental approach that would make taking issue with its rather simplistic view of âThe Troublesâ not only understandable, but the responsible thing to do.

But âBelfastâ wears down your defenses, thanks to the filmmaker's perceptive portrait of a family, very much inspired by his own, caught in the middle of a fight they want no part of, holding tight to all they hold near and dear, and coming to terms with the possibility that staying in the country they love might not be a feasible option. 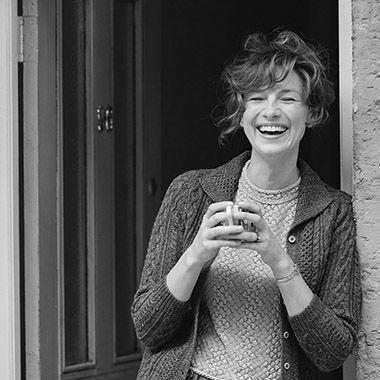 Caitriona Balfe in a scene from "Belfast." Photo courtesy of Focus Features.

The heartache of separation, coupled with an episodic depiction of daily life under heightened circumstances, propels this tender kitchen sink drama. As in the most compelling memoirs, it's all about the little things, those details that make the experience all the more immersive, and in âBelfast,â the little things make all the difference.

The movie begins with a montage, shot in color by cinematographer Haris Zambarloukos, showing present-day Belfast in all its picturesque splendor. Branagh then wastes no time is whisking up to the past. Our first glimpse of Buddy (newcomer Jude Hill) shows him in mid-battle, lashing out with a wooden sword and shielded by a rubbish tin lid. That make-believe joy is short-lived, as the unrest literally explodes before his eyes.

Buddy's ma (âOutlander'sâ Caitriona Balfe) is startled by the rowdy crowds, but she remains steadfast in her belief they will still be able to make a go of it. After all, her husband (Jamie Dornan) is away a lot, and she's managed to keep their heads above water. But we discover, along with this protective mother hen, that this threat is not going away. 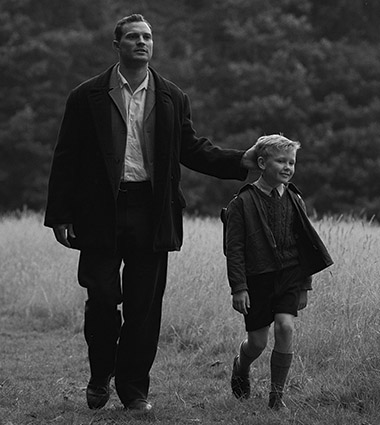 Jamie Dornan and Jude Hill in a scene from "Belfast." Photo courtesy of Focus Features.

When Pa, who shuttles back and forth between home and work in England, comes in for another all-too-short pit stop, he finds himself repeatedly approached by neighborhood agitator Billy Clanton (Colin Morgan) to join their efforts against the Catholic threat. He fends off the proposal, but knows that Buddy's older brother Will (Lewis McAskie) will become a target. His extended absence is something that weighs heavily on Buddy's parents, and that sparks some heated late night arguments overheard by the eavesdropping boy.

Buddy's grandparents, Pa's mom and dad, are a sea of calm and a fountain of wisdom, a marked contrast to the tensions at home. As played by Judi Dench and CiarÃ¡n Hinds, they're Branagh's not-so-secret weapon here. The dynamic duo help maintain the balance Branagh attempts to juggle between his depiction of political upheaval and his more intimate family portrait, frequently set to a nearly wall-to-wall soundtrack of songs from fellow Irishman Van Morrison, as well as an inspired use of the song âEverlasting Love.â 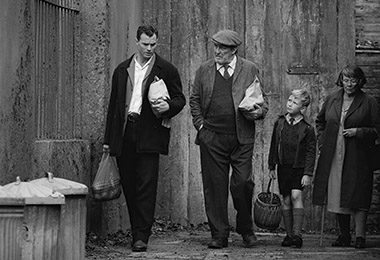 The director's strategy of portraying most events from Buddy's point of view might siphon off the subtlety one would like to see more of when dealing with this subject matter, but it makes for a lived-in, vivid time at the movies. And luckily for movie buffs, âBelfastâ is a film that's in love with the moving image. Trips to the local theater yield choice nuggets like Ma's disapproval at a scantily clad Raquel Welch in âOne Million Years B.C.,â or when the entire family gasps at the moment the car in âChitty Chitty Bang Bangâ takes flight. (A âMary Poppinsâ cash-in from where this critic is sitting, but that's okay.) 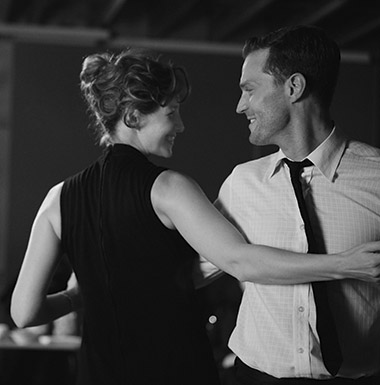 Caitriona Balfe and Jamie Dornan in a scene from "Belfast." Photo courtesy of Focus Features.

If I had to pick a favorite moment from Branagh's memory bank, it would be the moment Ma and a introduce the idea of moving to England to Buddy, and the boy breaks out into all-too-relatable whimpers and tears. It's clear what Branagh is after here: to make this family's troubles with âThe Troublesâ resonate with the road blocks we've encountered in our lives. âBelfastâ shines a spotlight on the universality of community, in its own irresistible way a celebration of the communal experience of experiencing a movie in the darkened confines of an auditorium. It's the thespian-director's most accomplished film in a while. I'm a fan of his live-action âCinderellaâ remake, but this is probably the best thing he's done since his four-hour âHamletâ back in 1996.

And best of all, Branagh brings it all in at just over an hour and a half, a welcome respite from awards season bloat. You can definitely see why the Focus Features release picked up the Audience Award at this year's Toronto International Film Festival, This is a bittersweet treat, emphasis on âsweet.â A tad saccharine in places? Yes, more than a tad, but this is otherwise the movie therapy I didn't know I needed, a stroll down memory lane that goes down like a nice spot of tea and a big, warm hug.