When Joan Anderson met actress Karen Allen, who was cast to play her in a movie version of Anderson's memoir, "Year By The Sea," a lunch meeting wound up being a three hour bonding session.

"She wanted to meet me," says Anderson about Allen. "So I drove from Cape Cod to western Massachusetts. We sat down for lunch in a Japanese restaurant and three hours later we were still talking. She was very much like me and we chatted about all kinds of things â life's changes, life's curve balls and its detours." 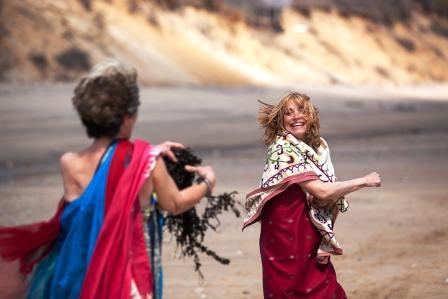 Celia Imrie and Karen Allen in "Year By The Sea."

Allen, best known for her performance asÂ MarionÂ Ravenwood in "Raiders of the Lost Ark" (1981), couldn't have been more perfect to star in "Year by the Sea," which opened this weekend in South Florida theaters. Allen has lived in Great Barrington, in the Berkshires of Massachusetts full time since 1993.

Anderson felt that the actress really could understood the depth of her book. "Watching her play me, well there was really nothing to copy because the character is every woman," the writer says, adding that everyone starts and stops then starts again and stops again many times in their lifetime. "It's a universal story."

The movie follows the same plot as the memoir: An empty nester retreats to Cape Cod rather than follow her relocated husband from New York to Kansas. After embracing the ebb and flow of life, she ultimately discovers herself.


The genesis of the making of the film was ebb and flow, too. Director Alexander Janko's wife had discovered the book after someone had tossed it in the garbage. "So there it was on his kitchen counter. She Â hadn't read it, but he did. He told me he was hooked after the first line."

Janko was at a crossroads in his life, too. He says in the movie's press notes: "Joan's opening lineâthe decision to separate seemed to happen overnightâresonated. Like many midlife readers worldwide, my raison dâÃªtre was eluding me. Joanâs mission to find herself anew is so honest itâs impossible to not ask yourself the questions she poses. One of themâwho are we beyond the roles we play?âinspired me to dig deep. In doing so, I discovered Joanâs quest for authenticity is universal. Her courage to embark upon a journey of self discovery became a story I needed to share."

He tracked down Anderson's agent, who asked her client: "You don't want your life up on the screen, do you?" 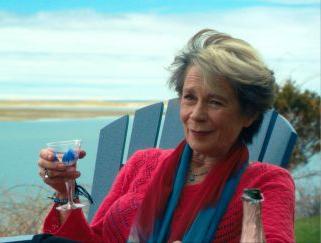 Celia Imrie as Joan Erikson in "Year By The Sea."

Well, maybe she did. She agreed to meet Janko. He visited Â Cape Cod and "I drove him around and showed him my life. I told him what the project meant to me. That it wasn't to make a film for my ego, but to help my mission go further. My book has been translated into 17 languages and not every woman will have the chance to read a book in their language, but maybe they'll see a movie."

Anderson talks much like the prose in her books. "The mission is that, as women we are not finished and that we can always reclaim our life."


One of the most entertaining aspects of Anderson's memoir-turned-film is the woman she encounters who becomes her mentor. Joan Erikson, the wife of renowned psychologist Erik Erikson, was a hugely influential force for Anderson, and is unforgettable in the film, played by Celia Imrie ("Calendar Girls").

She remembers meeting Erikson during her year by the sea, and it becoming a life-changing moment. "It was a miserable day on the Cape and I was in my 27th depression, having this pity party feeling sorry for myself, not knowing what to do and there she was." When Anderson ended up realizing the woman's pedigree, she couldn't think anything but kismet. "The couple that coined the phrase identity crisis were now in my life and I was having my own identity crisis." 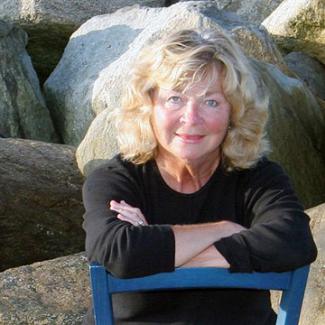 Joan Anderson, author of "Year By The Sea."

The movie is constructed, albeit subtly, around Erik Erikson's theory that one's sense of identity progresses through eight distinct life cycles marked by the resolution of successive emotional conflicts.

When the character of Joan arrives at the dune shack and she must drag her baggage up a series of stairs, she may be "carrying too much baggage." And when she arrives at the shack, where the furniture is covered in drop cloths, she's forced to a place where she's going to have to "uncover her life." A water heater in the basement breaks, and the character repairs it with duct tape, almost as if she's repairing her life that way.


Anderson continues to spread her message, offering retreats in Cape Cod. "It began when my best friends came to visit me there after the year by the sea and they said, 'you've changed so much. We want some of what you have.' "Â

When it was released in 2000, "Year By The Sea," spent 32 weeks on theÂ New York TimesÂ bestseller list. It was rejected, however, 37 times and rewritten 10 times. Â She says she probably has one more book left to write. She's released five books since "A Year By The Sea." But the new book won't happen until she's ready. "Joan Erikson told me she started to change around this age," says Anderson, who is 73. "I'm not quite sure what my voice is right now, and until I have my voice, I won't be able to write my next book."

It's all very fitting, and as reminiscent as one of the many memorable lines in the movie taken from her book. "I'm as unfinished as the shoreline on the beach."