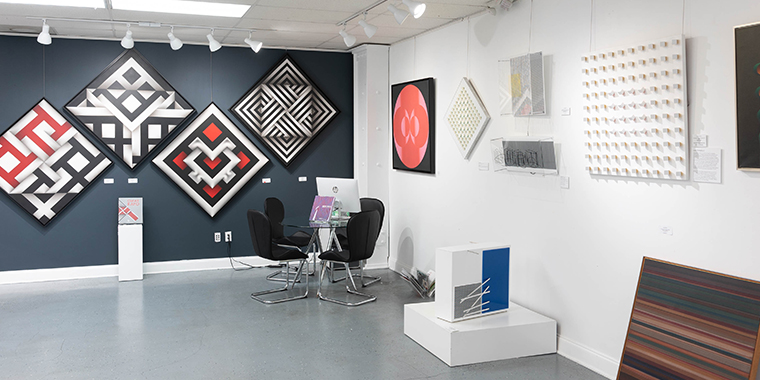 Omar Rayo is known for his abstract and geometric paintings using only the colors of red, white and black.

After a long pause due to coronavirus, business and the economy is slowly beginning to open, however, one of the most effective areas is that of the gallery, a gathering place that has now been depressed from social distancing and stay at home quarantines.

A gallery in Little Havana has reinvented itself to continue bringing art and promoting culture to the public through this uncharted time in history.

The Latin Art Core gallery specializes in Cuban and Latin American Art, but this time LAC makes a turn, organizing an exhibition of Op Art and Kinetic Art.

Taking into account current health regulations, LAC is inviting visitors to the gallery in small groups or individually by appointment.

Visitors will also be able to see art by established Latin American artists including established and emerging Cuban artist.

Optical Art called Op Art and Kinetic Art became an International phenomenon of the 50s and 60s. A select group of Latin American artists studied in Paris where the epicenter of the artistic movement was located. Artists experimented with geometric shapes that distorted the viewer's perception, creating paintings that although static gave the impression of having movement.

(see a video tour of the exhibit and the gallery below)

The Kinetic Art movement reflected the revolutionary notion of works of art that spanned time and space where sight and perception depended on movement.

Works featured in the Op Art exhibit at LAC feature important representatives of the kinetic and optical art movement in Argentina.

Featured art includes works by Omar Rayo, a renowned Colombian artist in the optical art movement. Known for his abstract and geometric paintings. Rayo distorted the shapes to create volumes of vibrant light using the colors white, red and black. 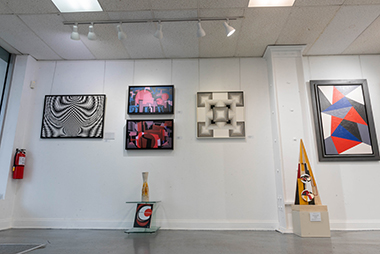 "In my works I used red and black as the dominant colors. Red was used by the Pre-Columbian tribes in the same way that we use black in contemporary western culture. I found the color red in the shadows and use them instead of black," Rayo said.

Polesello, a painter, muralist and sculptor, distinguished his paintings by producing optical effects of movements through layers of paint. At the end of the 1960s, he stood out for creating three-dimensional acrylic sculptures with an enveloping visual effect.

Tomasello is internationally known for his chromatic atmospheres in which he poses white cubes on a white background that combined with colors and shadows, reflect light. In addition to exhibiting internationally, Tomasello produced numerous commissioned large-scale installations for public spaces in Argentina, France, Mexico, and the United States. 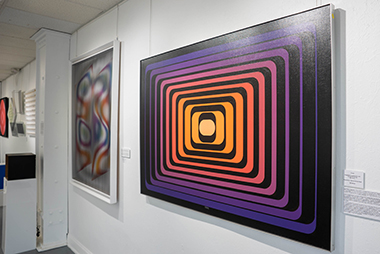 Jean-Pierre Vsarely Yvaral, a French artist, latched onto the idea of geometry in the artistic process.

Julio Le Parc is perhaps one of the most emblematic Argentine artists. He was a founding member of the group Recherche dâart visuel. Le Parc proposes a utopian vision for art and society through interactive installations, large-scale paintings and sculptures. In 2016 Le Parc was the subject of a retrospective "Form into action" at the Perez Art Museum Miami under the curatorship of Estrellita Brodski and in 2019 at the age of 90 he held a âsoloâ exhibition at the MOMA in New York.

In 1950, he joined the Cinematic movement promoted by the Denise Rene gallery together with artists of the stature of Julio Le Parc, Yaacov Agam, Victor Vasareli, Yvaral, Tingley and Cruz Diez. 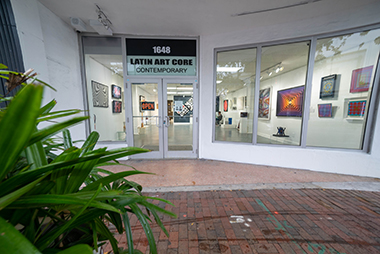 The Op Art movement also had its manifesto in Cuba through the artists Jorgar and Jorge Formes with a series of black and white paintings.

Richard Anuszkiewicz, the only American featured in the Latin Core Gallery show, was an American contemporary artist known for his impressive optical paintings. A disciple of Joseph Albers, his mentor, he adopts the geometric figure of the square and intervenes with optical details and vibrant colors.

The artist, who died in May 2020 just days before his 90th birthday, considered his work as deeply spiritual, explains "Color is my theme and his manifesto is my painting."