Full disclosure: I know this group and spoke before them several years ago at Saint Johnâs Church in Miami Beach; I have also met a few of these individuals under other community circumstances in South Beach. I am not, however, a member of this writers' group, which has met, as the back cover notes, "for over a decade."

Writing is hard. That anyone attempts it is heroic. Submitting oneâs work for publication is stressful and, more often than not, unsuccessful. It takes courage to crack that solid establishment publishing wall. So, it is to the credit of this Women Writers Group of South Beach that they have compiled short stories, memoir pieces, and poems.

I consider the short story the perfect literary genre. Short stories say what they have to say, briefly, concisely, and, when well written, they remain with the reader. Who, for example, could ever forget Shirley Jacksonâs âThe Lotteryâ?

Self-publishing has given opportunities to writers that were not there before. It is easily accomplished and inexpensive and the finished product looks like a âreal book.â Readers are One no longer able to tell the difference easily between a self-published book and one printed by establishment publishers. Thatâs good news all around for blossoming writers.

Not all self-published books, however, are reviewed by mainstream reviewing sources, but some bookstores are nonetheless offering them for sale. Thatâs good, too, and local bookstores should be encouraged to carry local self-published authors. (The most successful self-published memoir I have read and reviewed is the late Marian Del Vecchioâs "Hunger," which is beautifully written and is carried in the Miami Design Leagueâs gift shop, along with a collection of her political cartoons, also self-published.) 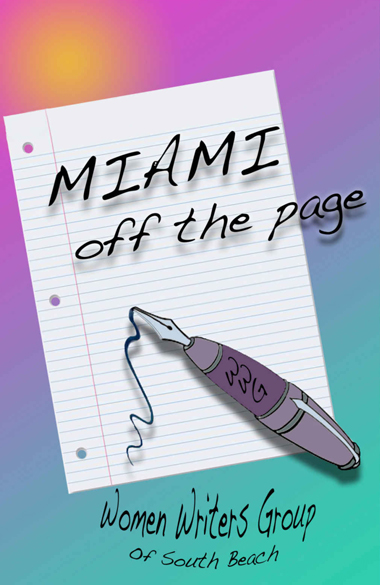 "Miami Off The Page" contains short pieces, ranging from a one to almost ten pages. Many of them fit into the memoir category rather than the short story fiction category. Five of them are poems; 21 fall into the other two classifications. The memoir pieces primarily have to do with the life-changing experience of moving to Miami Beach and starting anew. They are interesting to read and perhaps to compare with oneâs own decision to relocate here, a place very different from whence most of us arrived.

Of them all, my favorite piece is probably the shortest, Terry Trachtâs âThe Runner.â It says what it has to say economically and well, and itâs humorous, too. Trachtâs piece on living through Hurricane Irma, âIrma Was No Lady,â is good reading also. Dena Stewart pens two longer humorous pieces on her encounters with the singers Bob Seger (or was that him?) and Tiny Tim. Irene Sperberâs memoir, âKeys To Miamiâ is poignant, and a standout in this collection (Sperber writes about fine arts for miamiartzine.com).

âAlone In Miami,â by Rene Tastet, is a heartbreaking story on the ravages of the AIDS epidemic, speaking to all who lost lovers, family members, and friends during a period that hit this South Florida community hard, taking no prisoners.

The 26 pieces are fast reading, written from the heart, and relatable, and these writers â whose short bios are included at the end -- are to be congratulated for their group effort. Writing, as I might have mentioned, is not easy.

So, good for them, and good reading for anyone living in South Beach and interested in the experiences of others who live here.

The book isÂ available through Amazon.