From the modern offices on the upper floor of the Museum of Art and Design (MOAD) at Miami Dade College (MDC), glass windows look down into a concrete room on the first floor. Years ago, this space below served as a space for newspaper printing presses. 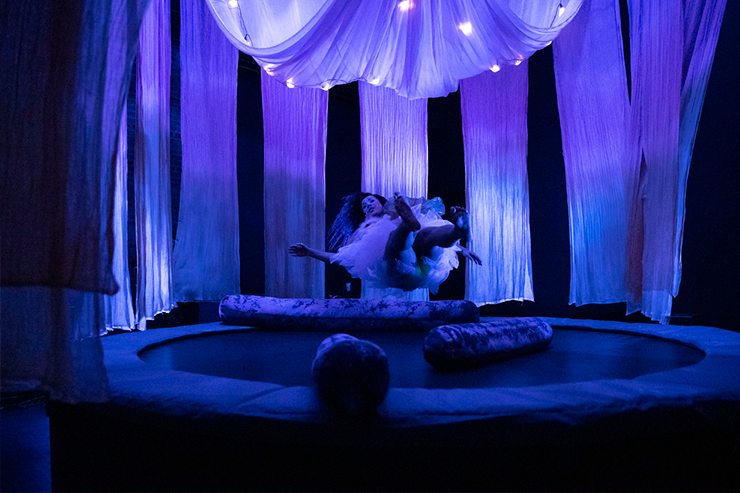 The historic building in which MOAD has resided since April 2018 â in the iconic Freedom Tower at 600 Biscayne Blvd. â used to house the Miami Daily News beginning in 1925. Later, after the newspaper vacated the tower, the U.S. government leased the building as a refugee processing center for Cubans escaping the harsh despotism of Fidel Castro. An permanent exhibit on the towerâs first floor shows photography of this era â a time when the tower was dubbed the âCuban Ellis Island.â

I am here to meet Rina Carvajal, executive director for MOAD, for a tour of the museum and to discuss one of its newest art installations, that will be on view during Miami Art Week.

The Freedom Towerâs history as both a newspaper and refugee processing center is fitting for MOAD, says Carvajal â the museum, which highly values both freedom of speech and the rich multiculturalism of Miami.

You can almost hear the mechanical flurry of newspapers shuffling off an old-fashioned press and can almost smell the hot ink drying. Then, reaching into another part of history, you can the families of courageous Cubans filing into the building to be processed and start a new life in Miami.

The concrete room is now transformed into a relaxing sleeping den â a multi-sensory and interactive art installation entitled âBlack Power Naps/Siestas Negras.â This soon-to-open installation, by Navild Acosta and Fannie Sosa, is designed to provide âjoyful, relaxing relief from the fatiguing systems of inequality.â

The installation is inspired, Carvajal tells me, by recent studies by various biomedical and academic institutions, including the Pew Research Center and Stanford University, that have revealed people of color are five times more likely to get less sleep than white people in the United States. Cited reasons include income inequality that requires African Americans to work longer hours for less pay; discriminatory housing policies that segregate many people of color into crowded neighborhoods, where nights are noisier; over-policing and inordinately high incarceration rates; anxieties that disrupt sleep patterns and impair the ability to be at ease when awake. 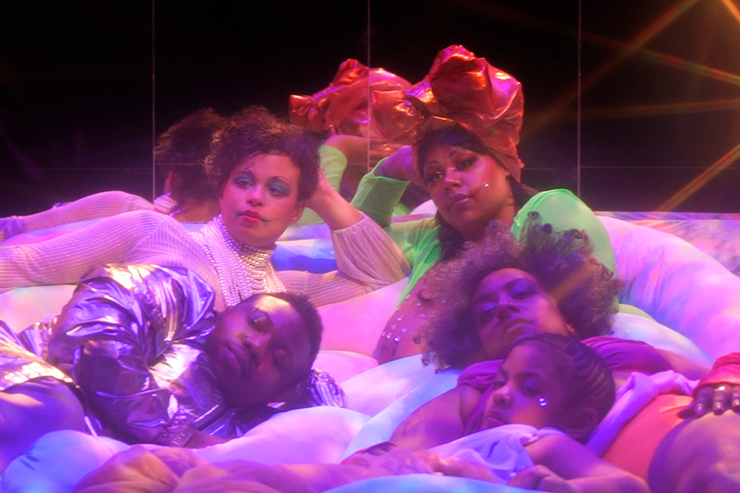 Sophie Landres, the curator of education and public programs for MOAD who joined Carvajal and me, plus their fellow coworker Nicole Martinez, the marketing and membership manager, said the installation draws a parallel between the exhaustion tactics that were used to subjugate enslaved people, and the exhaustion of today.

âThey are looking at how the descendants of enslaved people have been deprived of wealth, and also, energy,â Landres said.

The installation will feature embellished beds with gauzy canopies, serene lighting, therapeutic sound vibrations and other healing props. All this is done in the spirit of creative reparation and energetic repair.

âThe result is actually something that is quite joyful and generous,â Landres said.

The installation will host performative events throughout its run at the MOAD.

MOAD is also inviting local social-justice organizations to use the installationâs amenities for leisurely, community-building activities throughout the duration of the exhibition, which will close on Sunday, Jan. 12, 2020. 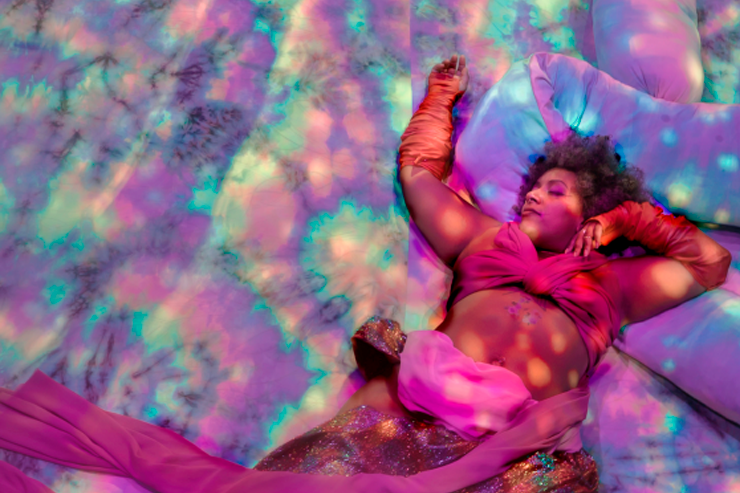 âBlack Power Naps/Siestas Negras,â Carvajal explained, is an installation that pairs well with the themes inherent in MOADs current exhibition, taking place on the museumâs second floor gallery space, our next stop.

"Where the Oceans Meet," Landres said as we stood in the gallery, "features 40 international artists whose work considers notions of shifting and porous borders â geographic, national, cultural, social, racial, ethnic and linguistic â and how crossing borders has shaped our world." The exhibit is multidisciplinary, featuring film, sculpture, poetry and other artworks.

I was immediately drawn to two works. One, an artwork made from the dilapidated wood panels of an inner city home in Chicago that artist Theaster Gates created, then sold to rehabilitate city neighborhoods; and a large abstract oil painting by Carlos Alfonzo who left Cuba in 1980 during the historic Mariel Boatlift, in which approximately 125,000 people made the perilous crossing to Key West. Alfonzoâs painting is raw, chaotic is engulfing in its feeling of lost at sea. âWhere the Oceans Meetâ opened on May 26 and remains on view through Jan. 12.

Both âBlack Power Naps/Siestas Negrasâ and âWhere the Oceans Meetâ are examples of the types of work that Carvajal said MOAD is focused on â work that blends art with activism, blurs boundaries between artistic disciplines and engages the community in important dialogue about place, identity and culture.

Carvajal says that she wants to challenge the "stale" notions of "museum as mausoleum." Since opening at Freedom Tower, the initiative is to become a âMuseum Without Borders.â Part of this mission is to taking artwork outside the confines of the museumâs walls and into the public sphere.

Carvajal expounds eloquently about her vision to create more public, creative spaces in Miami to breed connection and community.

âI think of us as becoming this bridge between academic communities and art communities and design communities, and also the communities at large because we have such a focus on outreach and collaboration and partnership,â Landres said. âWe are ideally positioned because we are part of an educational institution (MDC) which is like a natural prompt for our programming to be scholarly and educational, and very much attuned to social issues.â

One upcoming example of such a collaboration is a show MOAD will open in February in partnership with Forensic Architecture, a multidisciplinary research group based at the University of London that uses architectural techniques and technologies to investigate cases of state violence and violations of human rights around the world. The show at MOAD will debut as Forensic Architectureâs first show in the U.S.

âForensic Architectureâs team is comprised of artists, architects, musicians, sound specialists, etc. It is completely interdisciplinary and they strongly believe that artists play a crucial role in their investigation because itâs the analysis of visual information and itâs also the representation of it,â Landres said. âItâs a brilliant organization.â 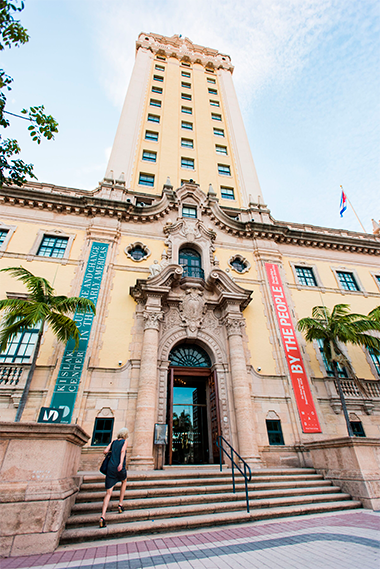 Another fitting example of MOADâs vision for a Museum Without Borders is âArchivo Vivoâ (Live Archive), which is an innovative and dynamic performative lecture, taking place at 7 p.m. on Saturday Nov. 2 at the MDC Live Arts Lab Bldg. 1, by members of Mapa Teatro, a Colombian interdisciplinary artistic group, that explores the theme of urban gentrification.

In front of projected images, documents and video testimonies, the directors of Mapa Teatro, Rolf and Heidi Abderhalden, will reflect on five projects in the Santa InÃ©s district of BogotÃ¡, also known as El Cartucho, âthe cartridge.â In one of the most ambitious urban renewal projects in Colombia, the extremely impoverished neighborhood was demolished, and a monumental park was constructed on its ruins.

Between 2002 and 2005, Mapa Teatro recorded the destruction of the barrio while developing projects with its displaced former residents. These collaborative and communal endeavors resulted in theatrical performances, installations and site-specific presentation.

âPersonally what I love about this project is that it addresses gentrification. There are conversations about gentrification in Miami happening all the time, and it is something that our community is absolutely facing. For a lot of people, it feels like here it happens really, really rapidly,â said Martinez. âThis group (Mapa Teatro) has looked at that concept and documented it in a way to sort of spark ideas among us. 'How should we document and commemorate and look at gentrification so that we feel like weâre more a part of the process?' "

All of the collective themes in each of the undertakings at MOAD, both inside and outside of the walks of the Freedom Tower, is what Carvajal and her team hope to have become part of the conversation in Miami by presenting creative work that prompts visitors to examine the past, present and future of the Magic City.

WHEN: In February. Exact dates to be announced 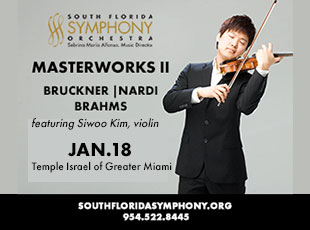