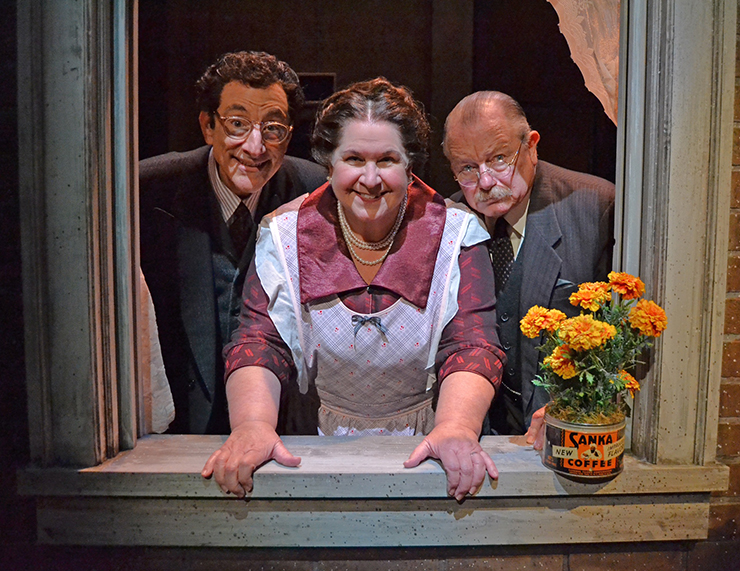 If you've not heard of Gertrude Berg, it's time you met her. Playwright Joseph McDonough's play, which originated in a workshop at Palm Beach Dramaworks and ran at the West Palm Beach theater before its GableStage production (now through Feb. 16), takes a slice of life from a turbulent time for the creative force behind the CBS television show "The Goldbergs."

Popular in the late 1940s and into the late 1950s, the series focused on a Millie Goldberg (Elizabeth Dimon),Â

McDonough's play zooms in on the latter part of the television series' success when one of its outspoken cast members is blacklisted as being a Communist. The play questions personal and professional loyalties. There's also the conversation regarding anti-Semitism that runs throughout. Thankfully, it never goes off that tracks and becomes preachy, but stays rooted in realism.

At 90 minutes, "Ordinary Americans" keeps a tempo. McDonough has constructed the dramedy like a musical composition with highs, mid levels, and dramatic lows. The cast, each some of the best professionals you'll see in South Florida theater, works together as an ensemble, yet delve into their characters (some of them playing multiple roles) with astounding depth.

Dimon, who portrays Gertrude "Tillie" Berg, the real life American actress, producer, comic writer, and a true pioneer in modern television, had the idea for developing the character into a one-woman show. William Hayes, the artistic director at Palm Beach Dramaworks encouraged Dimon to apply for a grant that might fund her idea. The grant didn't come through, but Hayes thought there was something to it anyway. Ohio-based playwright McDonough was tapped to work on a multi-charactere play (he had a successful run with Palm Beach DramaWorks with "Edgar and Emily," an original play which premiered at the theater in 2018.)

Hayes directed the production at Palm Beach Dramaworks and this incarnation at GableStage.Â

David Kwiat plays Philip Loeb, co-star to Gertrude on the TV sitcom as her husband. Loeb's true story has the lion's share of the slice of life; he was one of a multitude of people blacklisted under McCarthyism and his listing in the famous "Red Channels" book that was distributed. Ultimately, his reputation cost "The Goldbergs" its cancellation.

Kwiat's Loeb is filled with heartache and compassion, yet he brings to the character an underlying feeling he's teetering on the edge, a wonderful, subtle way to foreshadow the fate of Loeb.

Rob Donohue is Eli Mintz, who plays the character of Uncle David on "The Goldbergs." Donohue's comic timing is precise for the many wisecracks the playwright sends his way. Donohue also plays a dual role as a the hard hearted Cardinal Spellman. Tom Wahl plays five different roles, each of them different from the one before. Patti Gardner is also given double duty as Gertrude's personal assistant and confidante, then doubling as the "yoohoo" gossipy next door neighbor. Gardner stepped into the role that actress Marjery Lowe played at Dramaworks. The actress brings a refreshing calm to scenes that boil over. And then in a flash of a costume change, she's able to ratchet up the energy triple fold as the nosy neighbor.

The show within the play is wonderfully and seamlessly integrated. The TV show scenes are the most polished and entertaining. However, the play begins to lose some steam when the show within a show is gone. The dramatic scenes play out as repetitive as we journey with herÂ  more than a few desperate times to coerce advertising execs and anyone she knows for them to bring "The Goldbergs" back to life.

Like any new work, the play could use a few tweaks here and there. Still, "The Goldbergs" is filled with happy nostalgia -- a wonderful preservation of the good ol' days of television while offering a real-life perspective of one ofÂ  America's most troubled times.