MCB Stands Tall in the Miami Mecca of Dance 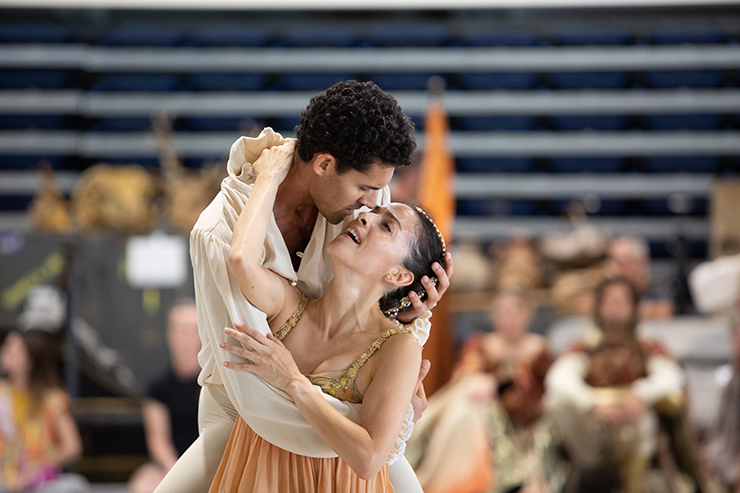 Founded in 1985, MCB is often thought of as being the backbone of the dance community in Miami, the company that does the big ballets in the largest theaters and with the most extensive budget. The repertory encompasses iconic ballets choreographed by George Balanchine (founder and Ballet Master in Chief of New York City Ballet), Jerome Robbins (choreographer, film and theatre director, theater producer) and a host of other established choreographic masters and new choreographic voices.

This season audiences will experience multiple styles of dance and the "Romeo and Juliet" begins that journey.

Audiences love a story ballet and, Lopez says, first and foremost, that "Romeo and Juliet is a story . . .a great story. There are a few ballets that bring people into the theaterÂ â and one of them is Romeo and Juliet,â she continues.

This "Romeo and Juliet" was choreographed by John Cranko (1927-1973) when he was director of the Stuttgart Ballet in Germany. There are numerous well-known choreographic renditions of the ballet. Kenneth McMillanâs for the Royal Ballet comes to mind. However, it is Crankoâs that is most often spoken about with raw emotion and teary-eyed recollection.

Premiering in 1962, for the Stuttgart Ballet, the production, was an immediate success and put Cranko on the map as, not only a great choreographer but a magnificent storyteller. The clarity of character, the relatable humanistic emotions, and the easily understandable story have made the tragic Shakespearian love tale a drawing card the world over.

MCB principal dancer, Katia Carranza, will be dancing the role of Juliet for the first time in this production.

âI learned the role when MCB did 'Romeo and Juliet' last time, but I didnât perform it. I think, now that Iâm older, a little more experienced, it really helps. This is a role that requires a lot of feelings and acting,â she explains. âYou work so much on the technique, and you must connect with your partner. It is very special. First such innocent love, then this passionate love that is so strong that it makes you do crazy things.âÂ

And then she talks about the music.

âJust to hear it you get so emotional,â she says.

The passionate Prokofiev score for the ballet is considered to be one of the greatest and most powerful ballet scores ever written.

âEvery day is different,â she says. âEmotions are different and individuals are different. Even though the choreography is the same, feelings can change with each rehearsal. It is a role that you canât âcopyâ another dancer. You must build and create your own Juliet.â

In creating her Juliets, Carranza says, âI want to show that this young girl, Juliet, is experiencing her first real love. There is nothing else in the world for her except Romeo.â

The ballet has been staged by Filip Barankiewicz, Artistic Director of the Czech National Ballet, noted ballet master and coach. Crankoâs is a large production to oversee. Each character portrayal must relate and develop the story with honesty. A tribute to Barankiewiczâs staging is that he brings out individual qualities in every role of the ballet. The characters are unique. This makes the story true not only for the performers, but for the audience as well.

And because Barankiewicz performed the role of Romeo, he has wonderful partnering tips for the men.

Carranza feels especially fortunate that she is performing her Juliet with Renan Cerdeiro, the MCB principal with whom she originally worked.

âHeâs such a great artist. Sometimes heâll look at me in a new way, or take my face somehow that I didnât expect. It makes me stay so much in the moment and I respond, I answer his movement. As a dancer, I think thatâs what youâre looking for.â

Cerdeiro performed Crankoâs Romeo with MCB in 2014. Maturing as a human and as an artist since then has given him new perspectives on the role of Romeo.

âI have a better understanding of life, of actions of humanity and how people interact with one another,â he says.

For his Romeo character development, Cerdeiro has a real "process" that he says he goes through.

âI seek out different medias. I watch movies, read the play, I watch other ballet dancers. I like to branch out and have different ideas of who Romeo is other than just the ballet character.â 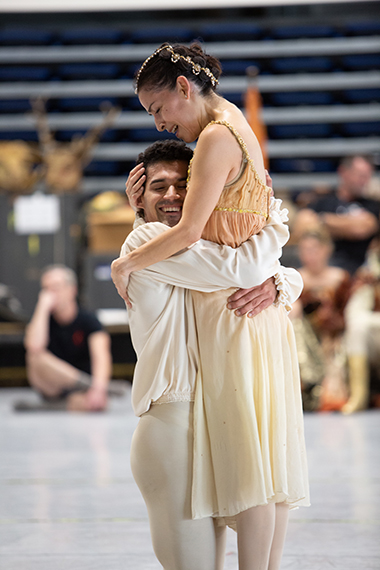 Cerdeiroâs Romeo is a young, passionate man with a lot of compassion for the people he lives among.

âIt seems heâs very close to the people in his town, he sees them every day.â He smiles. âHeâs this bright, sunny guy that everyone loves. I like to think of him this way so when things go âsouthâ a little bit with killing and all, there is a surprise element. His other side comes out, but it takes guts and a lot of pain and hurt for it to come out.â

The three male lead characters of Romeo, Mercutio and Benvolio are the best of friends. When anything goes awry with one of them, the other two are there, ready to protect.

Unfortunately, typical of Shakespeare, that is not to happen and tragedy ensues.

Itâs always an experience to interview dancers. Both Carranza and Cerdeiro cannot keep still when they speak. They express as much with their bodies as they do with words.

âI think everything in this ballet is more natural.â Carranza says. âIn Balanchine ballets, everything is big, more upper body, arms, off balance.â She was moving her arms extensively and rocking back and forth with her torso. âR & J movements are more romantic and everything is telling the story.â she says.

Cerdeiro says that everything is more human in Crankoâs choreography.

âNo matter who we work with, No. 1 is that weâre human,â he says. âHuman actions and reactions. Weâre not ballet dancers trying to tell a story. It seems to me that Cranko had the play in his hand and was exactly trying to match steps with what the words were saying.â

Maybe that is one reason why the Cranko version is so clear and easy to understand.

âEvery step has an intention,â Cerdeiro continues. âItâs not just acting, itâs infused in the choreography. They take hands and look up to the sky, theyâre begging the moon to seal their love.â He is dancing and has become Romeo as he speaks. One can see the moon, one can see his hope.

âItâs all in there, in the choreography, in the dancing,â he says.

There are numerous powerful and passionate sword fights that are meticulously choreographed. Even with the same dancers, as Carranza points out, each rehearsal is different. The reactions from the company are genuine and spontaneous, the emotions are real.

MCB has a rep that is comprised of many Balanchine and Robbins ballets. In conjunction with that, there are full-length traditional ballets of âGiselle,â âDon Quixoteâ and âRomeo and Julietâ as well as a myriad of other styles. Dancers of MCB must be adept at being diverse in their dance technique. Each ballet demands a different style, energy and delivery.

Cerdeiro says, âYou have to be able to flip from one style to the next. Itâs the way the company works. Overall, we do such diverse rep, itâs just another day.â He laughs. âI love it. Itâs so enriching to try different ways of moving.â

The MCB 2022/2023 season speaks to the diversity of the repertory and the ability of the dancers to embody various styles. It ranges from âRomeo and Julietâ to âModern Mastersâ then to âFresh and Fierceâ culminating in âEntrada.â December, of course, hosts the traditional Balanchine âThe Nutcracker.â

Lopez says, âA few years ago, I found out through a marketing survey that audiences are interested in seeing more modern ballet, which really opens up the possibilities of repertory for me. This is how the 'Modern Masters' came to life. I thought of the two great pioneers of modern dance, Martha Graham and JosÃ© LimÃ³n. We had LimÃ³nâs âMoorâs Pavaneâ in the repertory and I thought how fascinating for dancers and audiences to see a Graham piece at MCB. Weâd never done one.â 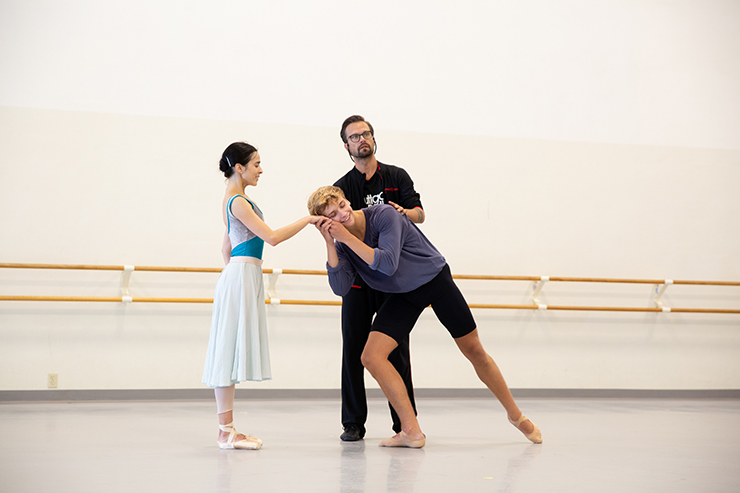 âI really wanted to bring back 'Symphony in Three Movements,' Lopez remarks. âThe company does it so well and the dancers love it. Itâs a challenge for them all.â

A huge, intense leotard ballet, Balanchineâs âSymphony in Three Movementsâ is performed to a complex Stravinsky score known as one of the most difficult musical scores to hear and to count.

âThe company, this year, is dancing like never before. I see it and Iâm usually the one asking for more! â Lopez exclaims. âItâs very exciting to see it all taking shape.â