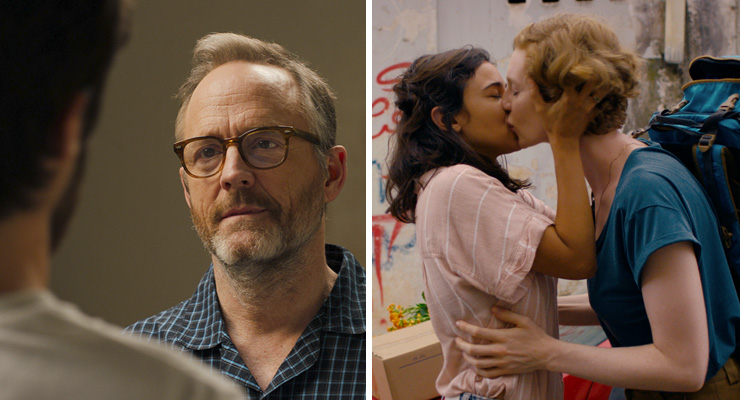 Man, it's big. Its breadth and scope are staggering, even to the most seasoned cinephile, but a first glance at the lineup for the 2021 Miami Jewish Film Festival once again denotes the annual event's willingness to break from norm, as well as a tendency to nudge audience members away from their comfort zone while still offering plenty of more traditional options. Formats, recurring themes and worldviews are as varied and plentiful as one can hope for. Executive Director Igor Shteyrenberg's message is loud and clear: when it comes to offering South Florida movie buffs a taste of international cinema, size does matter.

Your intrepid reviewer and miamiartzine editor Michelle Solomon have once again been selected to be a part of the festival's Critics Jury, but before plunging headlong into a movie watching marathon, I wanted to give you a first taste of what you can expect to find at this year's hybrid celebration of movies, which takes place Wednesday, April 14 through Thursday, April 29. It will predominantly unspool virtually but will also feature drive-in showings in Wynwood and outdoor gala screenings at the North Beach Bandshell's open-air amphitheater. With 100 features, 45 short films and other special programs, it's a lot to take in, and with OUTshine Film Festival overlapping during the latter half of this year's edition, the content cacophony will only grow more daunting.

My advice? Take time to examine the lineup carefully and make a plan. After all, with ticket costs being (let me double check my notes) zero, the sky truly is the limit. The two films I'm taking a closer look at before the floodgates open next week are part of the fest's newly launched section devoted to LGBTQ+ cinema. One is subtle and compact, the other broad and sprightly. The hustle and bustle of Tel Aviv figure prominently in both. All right, enough preamble. Let's dig in.

âSubletâ: You probably wouldn't look twice at Michael Green if you crossed paths at an airport terminal. It's not just the dull wardrobe: khakis and a generic shirt with the sleeves rolled up that scream âpreppyâ but without the appeal. It's not the salt-and-pepper fuzz that, if not unkempt, suggest he's not even trying. No, there's a weariness to this American traveler who's trying not to come across as a tourist but is failing spectacularly. It's a spiritual fatigue. 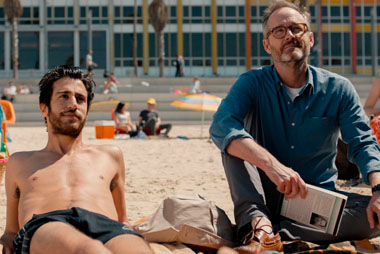 Niv Nissim and John Benjamin Hickey in a scene from "Sublet." (Photo courtesy of Greenwich Entertainment)

Michael (John Benjamin Hickey) flies to Israel from New York, ostensibly to write a feature on the ârealâ Tel Aviv, and he has even secured a neat little apartment in the hip and trendy part of town. But a few minutes into âSublet,â director/co-screenwriter Eytan Fox's nuanced travelogue/character study, Michael's vision of a cosmopolitan getaway comes crashing down when he arrives at the flat, only to find its tenant in the middle of shooting a scene for a student film he's making. It might be in a desirable location, but this place looks like, no need to be tactful about it, a dump. 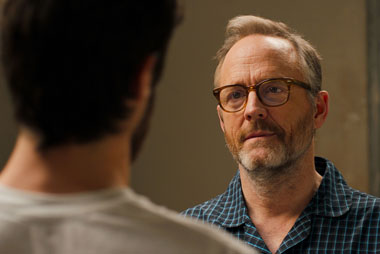 John Benjamin Hickey in a scene from "Sublet." (Photo courtesy of Greenwich Entertainment)

Fox wastes no time in bringing his two main characters together in a scene that wouldn't look out of place in a fluffy rom-com, but it's safe to say the âYossi & Jaggerâ and âWalk on Waterâ filmmaker is after bigger fish. A âPlan Bâ strategy involving a hotel is already percolating in Michael's head when Tomer (newcomer Niv Nissim), the tenant and budding cineaste, profusely apologizes about being unprepared and tries to talk his guest into staying. Reluctant acquiescence leads to so much more in this engaging two-hander as the two men, divided by three decades and the ensuing philosophical difference such an age gap suggests, get to know each other, once Tomer offers to be a tour guide of sorts. 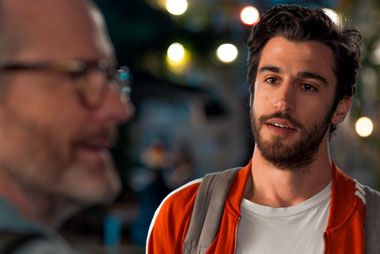 John Benjamin Hickey and Niv Nissim in a scene from "Sublet." (Photo courtesy of Greenwich Entertainment.)

Michael, as it turns out, is not just any travel writer, but The New York Times' travel writer. He leaves behind a husband back home, but it's apparent their distance is not just physical. Tomer, dismissive of any conventional notions of romance and relationships, doesn't even want to define his sexual leanings one way or another, though it's clear he likes to sleep with men.

He even introduces the buttoned-up Michael to Israel's version of Grindr. They go sightseeing, but just as often do not see eye to eye on matters both trivial and fundamental. Somewhere on the itinerary, an unexpected bond is forged in ways that not only recall Richard Linklater's âBeforeâ trilogy but also hark back to Sir David Lean's âSummertimeâ (1955), with Hickey playing a more subdued, considerably less lovelorn version of Katharine Hepburn's Ohioan in Venice. Like Michael's own trip, âSubletâ deepens as it progresses. Fox has made a gently observant exploration of loss, loneliness and those fellow travelers who come into our lives like a much-needed port of call. It's pretty enchanting.

âKiss Me Kosherâ: The road to romantic fulfillment is more of a crash course for the two young women at the center of this madcap marriage comedy with more than a passing resemblance to âMy Big Fat Greek Wedding.â Shira (Moran Rosenblatt), a cafÃ© owner, is moving in with her German girlfriend Maria (Luise Wolfram) in, where else, Tel Aviv. It's a huge step for both of them, since Shira is not known for staying committed, and Maria has dropped everything back home in order to move to Israel. 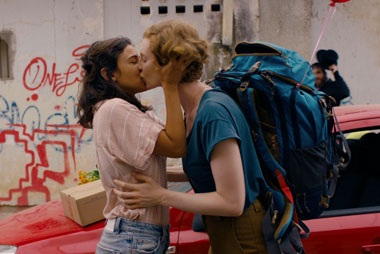 Moran Rosenblatt and Luise Wolfram in a scene from "Kiss Me Kosher." (Photo Courtesy of Menemsha Films)

On top of their own relationship strife, Shira's family, with their boisterous Friday dinners, opinionated chatter and pesky line of questioning about what Maria's grandparents did during World War II, might be more than the couple can take to go the distance. After all, says Shira's American-born dad (John Carroll Lynch), Maria is the âholy trinityâ of prospective in-laws: lesbian, gentile and German. But the couple's most formidable road block is Berta (Rivka Michaeli), Shira's stubborn, set-in-her-ways grandma. Berta, who's lost count of her granddaughter's previous girlfriends, doesn't know why she can't just settle down with a nice Jewish girl, or better yet, leave her out of it. Because, you see, Berta has her own open secret: she's sorta dating Ibrahim (Salim Dau), a widower who's a perfect gentleman. And also Palestinian. 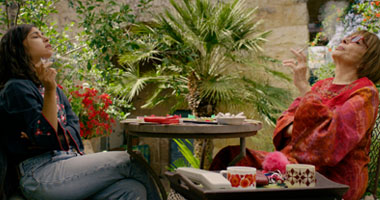 Moran Rosenblatt and Rivka Michaeli in a scene from "Kiss Me Kosher." (Photo courtesy of Menemsha Films)

What Berta doesn't know is that, thanks to a cutesy comedy-of-errors stumble, Shira and Maria are actually engaged. But nothing stays secret for long in this frenetic cultural clash that further winds itself up when Maria's parents find out she's off the market. And yet, despite all the narrative strands writer-director Shirel Peleg juggles, the darn thing works, thanks to a spirited ensemble cast and a zany energy that brings Bollywood productions to mind.

The dialogue, with one-liners that land with a thud about as often as they score, can't quite keep up with the rest of this fast-paced crowd-pleaser. You feel the strain in the director's tireless efforts to draw a laugh and score some topical points while she's at it. But there's genuine charm underneath the plethora of neuroses on display. Better yet, the film delves into some serious subject matter without diluting its unflappable sense of fun. Peleg, here making her feature directing debut, also pokes fun at how everyone in Israel knows each other or is somehow connected. Six degrees of separation? More like three.

âKiss Me Kosherâ is too much of a smart-ass, and a little of its sitcom-on-speed scenarios go a looooong way, but in its own messy way, Peleg sustains an enviable organized chaos. She serves up genre pleasures that are a lot less guilt-inducing than they have any right to be.

Eytan Fox's âSubletâ makes its Miami premiere at the 24th MJFF. It's available to stream April 15-29. âKiss Me Kosherâ makes its Florida premiere and is available April 21-29. For more information about the rest of the lineup, go to https://miamijewishfilmfestival.org/films/2021/.