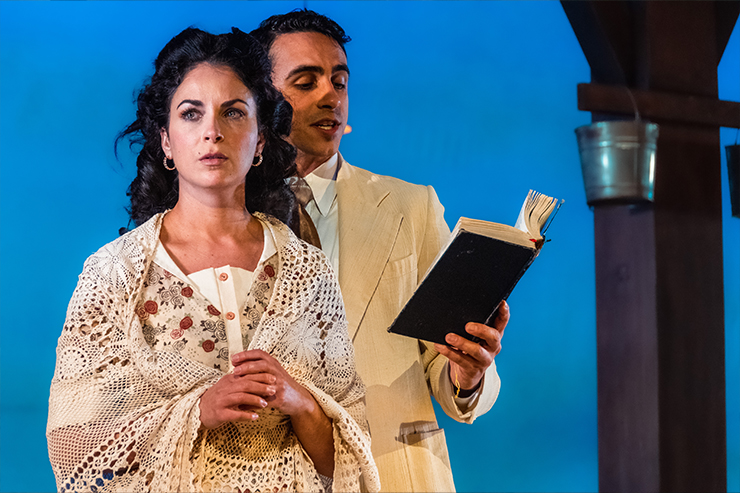 An undeniably celebratory mood fills the air on Miami New Dramaâs stage as the characters who populate the classic play, âAnna in the Tropicsâ unveil a new brand of cigars.

Meanwhile, in real life, there is also cause for celebration. In particular, Miami New Drama, just opened a delightful new production of âAnna in the Tropics.â The production honors the 20th anniversary of the world premiere of Miami-native Nilo Cruzâs Pulitzer Prize-winning classic play.

The roughly two-hour-and-15-minute production, which includes an intermission, runs through Feb. 5. The venue is the companyâs resident Colony Theatre on Lincoln Road, Miami Beach.

The production deftly captures the playâs various moods, which include the aforementioned celebratory air from one of the playâs later scenes.

As he did at the Coconut Grove Playhouse in 2004, Cruz is directing his play. It concerns a family of Cuban-American cigar makers near Tampa in 1929, and the new lector hired to read to factory employees while they roll cigars.

To be specific, the lector reads Russian author Leo Tolstoyâs classic romantic novel, âAnna Kareninaâ to the workers. And, before long, the action in the novel begins to mirror what is happening to the characters in âAnna in the Tropics.â Certainly, art imitates life. And no, you do not need to be familiar with âAnna Kareninaâ to enjoy, find meaning, and relate to Cruzâs timely and timeless masterpiece. It is, at turns, dramatic, sexy, comic, romantic, heartbreaking, and elegant. In addition to Cruzâs gorgeous language, strong conflict keeps our eyes and ears riveted to the stage.

Under Cruzâs careful direction, which includes deft pacing and staging, a cast of veteran talented actors not only skillfully captures moods but handles the playâs poetic and image-conjuring language with flair. The performers, whose portrayals are believable, wrap their expressive voices around Cruzâs words.

In addition, the behind-the-scenes artists shine. They include scenic designer Arnulfo Maldonado. His âless-is-moreâ approach sets us in the factory without overcrowding the stage. This allows us to concentrate on the story and characters. 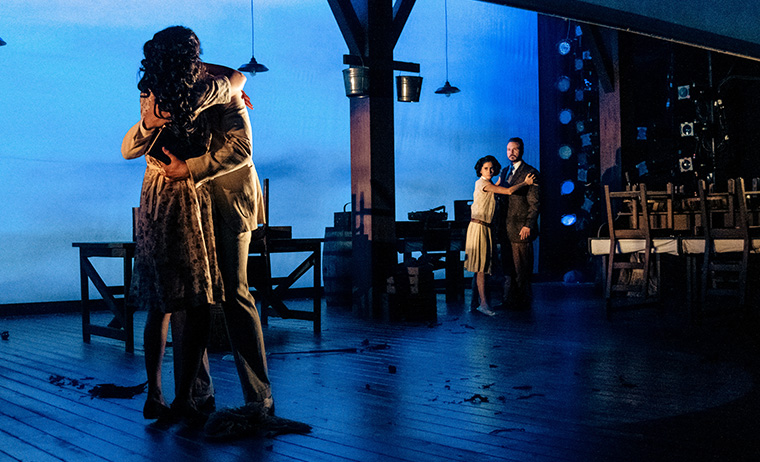 Appropriately, unused chairs hang upside down from tables perhaps symbolizing the notion that the action and characters in âAnna Kareninaâ turn the lives of Cruzâs characters upside down. Also, the set includes a backdrop that resembles a horizon with a sunset and sunrise, depending on the time of day. In addition, buckets hang from poles without seeming to serve much of a purpose.

Thanks to sound designer Salomon Lernerâs work, we are able to hear the actors loudly and clearly. In addition, the music that Lerner incorporates enhances the storyâs tension and romance.

Up until the 1920s, workers hand-rolled Cuban cigars in Cuban and American cigar factories. âAnna in the Tropicsâ takes place during a time when lectors and hand-rolled cigars were falling out of style.

In fact, one of âAnna in the Tropicsâ themes is tradition versus innovation. Specifically, in the play, two characters favor dispensing with the tradition of lectors and manufacturing cigars with machines. In addition, they favor making cigarettes instead; movie stars at the time posed for photos with cigarettes in their mouths.

However, the majority of the playâs characters would rather keep human workers, cigars, and preserve the tradition of the lector. To them, literature enriches oneâs life, and therefore it benefits employees to hear classic stories while they work.

Undoubtedly, âAnna in the Tropicsâ celebrates the transformative power of literature. This makes the play particularly timely today, when book banning is happening at a concerning rate. But this is not the only type of censorship that has made headlines in the not-too-distant past.

Last September, Miami-Dade County Public Schools officials informed the theater company that they would not bus high school juniors and seniors to the Colony to see special performances of the play. Fortunately, both sides resolved that conflict over age-appropriate content. Therefore, as part of this production, three groups of public school students and one audience of private school students will see the play.

âAnna in the Tropicsâ is also timely because talk in the play about switching to machine manufacturing calls to mind present-day technology. Indeed, these days, automated systems and machines perform work that people used to do.

While technology is useful in many cases, nothing can replace live, in-person theater, during which a powerful connection exists between audience members and performers. Fortunately, the pandemic has reached a point in which it is safe for live, in-person theater to continue after a hiatus that was too long. 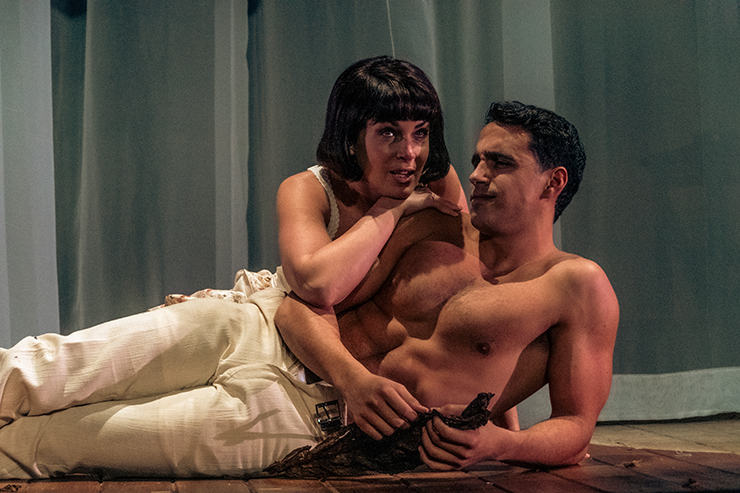 Hannia Guillen as Conchita and Gabriell Salgado as Juan Julian talk in Nilo Cruz's "Anna in the Tropics." (Photo by Andres Manner)

Miami New Drama's strong cast helps us appreciate the power of live, in-person theater. Leading the cast, as the lector, is Gabriell Salgado, a 2019 New World School of the Arts graduate.

Salgado made his professional debut as the Creature in Zoetic Stageâs 2021 production of âFrankenstein.â Since then, Salgado has established himself as one of the South Florida theater communityâs most in-demand and talented actors.

True, Salgado is much younger than many actors who have portrayed the lector. For instance, Jimmy Smits, 67, played the role in the 2003 Broadway production. However, Salgadoâs youth works for the character, rather than against him. Indeed, in this production, Salgadoâs thoughtful, debonair Juan Julian (the name of the lector) is like a prodigy who amazes listeners with his elegant, soothing, and expressive voice. The actorâs calm, reassuring voice nicely contrasts with the harsher voices of the bickering characters.

One of the benefits of a youthful actor is the vibrancy that can come with being young. Salgado, with dark, shining eyes and dark hair, gives us an energetic lector who sounds like he could read all night without his voice tiring.

In stark contrast to Salgadoâs lector is Daniel Capoteâs Cheche, one of two characters trying to modernize the cigar factory. Cheche is half-brother to patriarch and factory co-owner Santiago.

Capote lends Cheche a convincing no-nonsense, impatient, curt manner. The actor, who often speaks forcefully, nails his characterâs anger. In Checheâs past, his wife ran off with the previous lector, so one can understand the extent of his feelings. 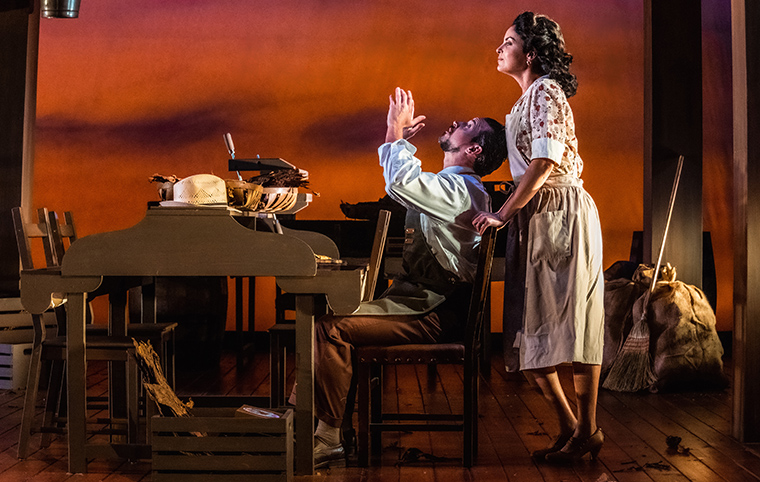 Brandon Espinoza is Palomo and Hannia Guillen plays his wife Conchita in Nilo Cruz's "Anna in the Tropics." (Photo by Andres Manner)

Palomo, the husband of Santiagoâs older daughter, Conchita, is another forceful character. In the role, Brandon Espinoza commands the stage. While the actor is forceful, he, like his castmates, delivers a naturalistic performance.

Palomo is at odds with his wife due to his numerous affairs.

The younger daughter is Marela, and Andrea Ferro plays her with a dreamy, imaginative aura.

As the patriarch, Santiago, Serafin Falcon convincingly carries an authoritative presence. In addition, the actor makes his characterâs embarrassment about his habits, including gambling, palpable. With his head down, Falconâs Santiago stays away from the factory until his misdeeds do not bother him as much.

Santiago and Ofelia (Saundra Santiago) share a believable chemistry as a close but bickering couple. They can be argumentative, but also affectionate. Despite her faults, Santiago imbues Ofelia with a touching inner strength and zest for living. 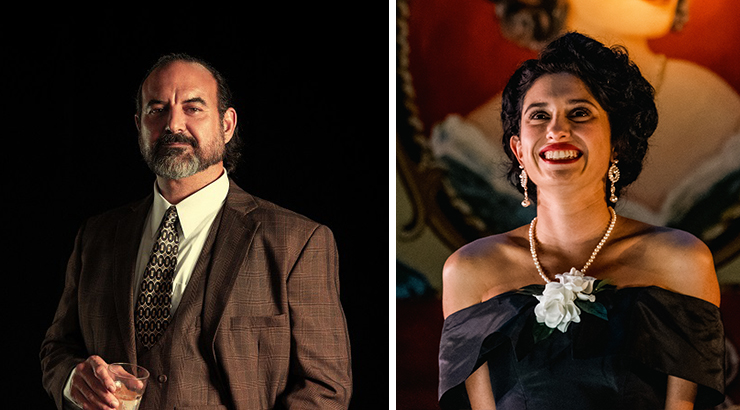 The performers play well as an ensemble by listening and reacting to each other. In addition, each actor creates distinct, well-drawn characters.

Cruz, the first Hispanic playwright to win the Pulitzer Prize for drama, creates recognizable, passionate characters that may bring to mind the people populating Tennessee Williamsâ plays. By the end, you do not want to leave Cruz or Williamsâ characters.

This is a theater company that has increasingly focused its efforts on commissioning and premiering new work â pieces that reflect the regionâs richly diverse communities. But with âAnna in the Tropicsâ celebrating its 20th anniversary, the time was right to revisit a classic â a classic that âbelongs to Miami,â in Artistic Director Michel Hausmannâs words, since its author grew up and studied in the Magic City. And if you have not read it already, perhaps the production will move you to read âAnna Karenina.â

Miami New Dramaâs production of âAnna in the Tropicsâ has been extended through Feb. 12. Performances are at 8 p.m. Thursday-Saturday, and 3 p.m. Sunday. Ticket prices range from $46.50 to $86.50 (including a service fee). The Colony Theatre is located at 1040 Lincoln Road in Miami Beach. For more information, go to www.miaminewdrama.org, or call (305) 674-1040.