All Hands on Deck for MSO Finale 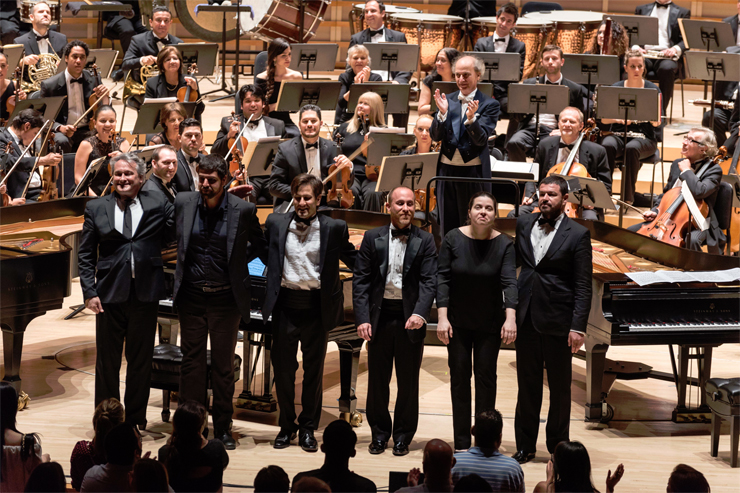 If you were a horse or pianist last weekend, you might have been at the top of your game.

Concluding its 26th season on Sunday, May 3, at the Adrienne Arsht Center's Knight Concert Hall, the Miami Symphony Orchestra (MISO), helmed by Music Director and Conductor Eduardo Marturet, presented "The Steinway and Sonsâ Piano Extravaganza." This was an evening of juicy keyboard music that featured not one, not two, but six primo pianists.

Each of the four successive pieces on the bill added another set of hands, the last composition, Hexameron, requiring all six virtuosos to play en masse.

The first hands on deck belonged to Israeli concert pianist Elisha Abas (the great-grandson of Russian composer Alexander Scriabin) performing Khachaturian's Piano Concerto in D-flat Major. And what might you expect from a talent who made his Carnegie Hall debut at age 11? The handsome dark-haired Abas was at once muscular and refined in his playing, both qualities well suited for shading Khachaturian's dynamic concerto of captivating rhythms and scrumptious melodies â at once melodic and dissonant, bristling with both folksy and Russian elements.

Marturet and MISO fully realized the cinematic scope of the theme while Abasâ unblemished runs turned delicate and nuanced in his solo passages. Rather than conducting with a meticulous beat, Marturet favored flowing gestures, keeping the 60 plus MISO players matched well, both dynamically and emotionally to Abas.

Abas sprinted on the keyboard between the orchestraâs thematic spaces, broke into a wild scamper, and connected his activity in the upper and lower registers with remarkable runs. As the orchestra closed the movement with the pounding that began it, the audience erupted with applause, Abas ignoring the breach of decorum with an appreciative nod to the crowd.

Fiercely engaged and focused, though not showy, Abas continued to paint the entire keyboard with rich colors and shades. His light touch navigated the mysterious atmosphere of the second movement, a flexatone (musical saw) contributing an eerie effect as the virtuoso mastered the enchanting fog. Abas gained momentum through his cadenza in the third as he plowed through the big brass â all on stage hammering dramatically to the finish.

Two pianos connected like conjoined twins when NPR's "From the Top"Â host, Christopher O'Riley, and Brazilian concert pianist and composer, AndrÃ© Mehmari, presented the world premiere of Mehmari's Concerto for Two Pianos and Orchestra, a MISO commission. This new work blended the three traditional movements into a seamless gratifying whole.

At the top, driving percussion and brass morphed into music that was largely fluid and seemingly shapeless; it was difficult to discern a melody, though there was a lurking rhythm to keep you engaged. The pianos were deep in this cloud, poking through the haze with an occasional tinkle. After slowing to a deliberate pace, O'Riley and Mehmari emerged on a wholly new tack with a bluesy Gershwinesque idiom that bloomed in the orchestra. The solo jazzy licks were silky and satisfying, waxing into a theme that was all at once jazzed, Latin and classically straight ahead. The segue into the multi-rhythmic ending immediately drew the crowdâs affection and prompted an encore, a multi-layered piece âLagoa da ConceiÃ§Ã£oâ (arranged by Mehmari) which boasted a Latin motif ending in perfect quietude.

On to the three-hander. New World School of the Arts' professors Roberto Berrocal and Ciro Fodere shared the stage with Ukrainian-American pianist Marina Radiushina for Mozart's Concerto No. 7 in F Major for Three Pianos and Orchestra.

Unmistakably Mozart, the accessible and pleasing melody was immediately present at the top of the opening movement. The three pianos held sway over the paired down orchestra, Berrocal between the other two pianists, nodding in collaboration, one depositing the melody, one trilling and twinkling alongside, the third in a dazzling run, all in wonderful agreement. The orchestra, on point and on cue, swopped places seamlessly with the soloists.

Berrocal, Fodere and Radiushina pulled the simplicities and subtleties out of the second movement melody with a collective light touch and authentic technique. They flexed their chops in the third, the orchestra following to the end with a clean finish.

This performance was a music lesson in what makes Mozart, Mozartâ¦brilliant and enduring.

Princess Belgiojoso, a strong revolutionary presence in Paris, had a good ear for music and a keen eye for the best musicians. After hosting Bellini during the writing of his opera, I puritani, and after his untimely death shortly after its 1835 successful premier, she imagined the operaâs "Hymn to Liberty" (the duet âSuoni la trombaâ) as a theme and variation for solo piano. She commissioned Liszt to assemble a set of variations on the march by collaborating with five of his pianist pals (including Chopin), each of them to contribute a single variation. The piece was to be called Hexameron (referring to the bible's six days of creation) and it was to be premiered in Belgiojosoâs Paris salon. Liszt composed the introduction, second variation and finale, and stitched the piece into whole cloth. He later arranged it for piano and orchestra.

It was all hands on deck as three more pianos were wheeled onto the stage to bring Hexameron for Six Pianos and Orchestra to life. Also featured were MISOâs exceptional musicians. As he did for the Mozart, Marturet stood between the pianists (with their backs to the audience) and the orchestra upstage of him, giving the maestro the ability to twist towards and engage the six soloists or MISO as he pleased. Marturet was animated and full of delightful vigor. If having fun was a crime, he would have been arrested.

O'Riley was Liszt, leading the charge past the orchestral introduction when all 12 hands played the rousing theme together for the first time. Quite a spectacle!

The first variation was handled adeptly by Radiushina, her sparkling arpeggios making her piano sound like a music box. O'Riley took the Liszt variation, turning the theme into a pensive meditation with gravity and charm, a haunting horn bringing the variant to a calming effect. As it concluded, O'Riley gripped his bench and leaned back dramatically as if to say, âHow about that!â drawing a chuckle from the audience.

The third, fourth and fifth variations employed spectacular runs, Berrocal displaying mind-numbing dexterity with his romping, Fodere sounding like his instrument had more than 88 keys as he percolated and flowed nonstop, and Mehmari climbing ardently upward with the notes, releasing them like beads of melody falling from the sky.

Abas playing Chopin, silencing a large statement by the orchestra with his single piano notes, morphed into a romantic, lovely and prayerful final variation of the theme on a bed of shimmering strings.

The orchestra launched into a toe-tapping finale â all the players, revved up and engaged, turned the corner and headed down the homestretch for a triumphant photo-finish, bringing the clapping, calling and whistling crowd to its feet.

If you were American Pharaoh or any one of these six outstanding pianists, it was a good race.