Movie 'My Name Is Sara' has South Florida Roots

It isn't just another Holocaust movie.

"My Name Is Sara," opening this weekend in theaters across South Florida has relevance today on so many levels.Â

Take, for instance, the war in Ukraine. "My Name is Sara" is based on the true story of Sara GÃ³ralnik who left her home when the German Army invaded Korets, which was then part of an independent Poland and is now Ukraine. 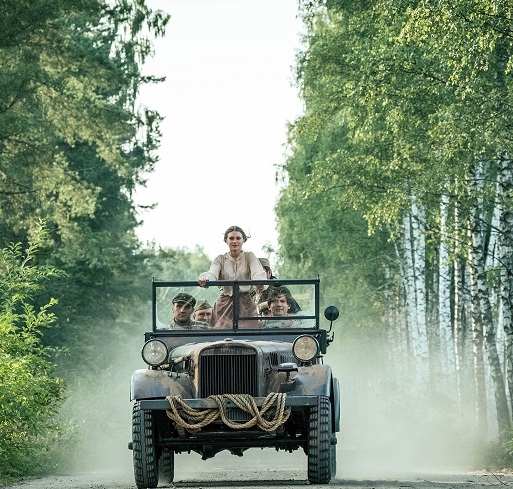 Zuzanna Surowy who stars in "My Name Is Sara" was discovered during an open casting call across 6 cities in Poland where she was chosen from over 650 other amateur actresses.

As the horrors of Ukraine play out daily, GÃ³ralnik's 1941 story has many parallels of the horrors of war, families divided, many killed, and how, more than 80 years later, battles of land and religion are still fought.

Director Steven Oritt, who will be speaking in a Q&A on Saturday, July 30 at MDC's Tower Theater, was born and raised in Miami.

His grandmother, Selma Oritt, a philanthropist, was a founder of Mt. Sinai Hospital, Temple Beth Shalom and the Jewish Museum of Miami Beach.Â

"My Name is Sara" is Orittâs feature film debut. He started in the music industry working on music videos with Foo Fighters, Muse, One Republic, Pete Yorn and Paulina Rubio.

He then made the documentary "American Native," a film about a reclusive tribe of Native Americans living 30 minutes from New York City in New Jersey. Other works continued, but it was "My Name Is Sara" that he calls the most "rewarding project of his career."

After making the festival circuit, including winning the Audience Award for Best Narrative at the 2020 Miami Jewish Film Festival, it was picked up for distribution by Strand Releasing and now is getting its rollout. Oritt is also one of the producers of the film.

What Oritt calls the "deeply personal story" was shared with him in 2014 by Sara herself.

In press notes, Oritt says "her married name was Sara Shapiro and for over 50 years, she hid this incredible true story from her own family, choosing to only reveal the secrets of her ordeal later in life."

Oritt says before she passed away in 2018, she was able to convey, "in detail," the horrors she endured to survive.

"Her memories were the basis for my film and provided a structure that the screenwriter and I were able to weave into our narrative," he says in press notes for the film.

Some of the minor characters in the movie were invented, Oritt says, but most of the main characters were not. "Most of the actions that transpire are rooted in true events."

After her mother tells Sara (Zuzanna Surowy) and her brother to escape their home as the family is sure to be slaughtered by the Germans, she ends up taking on the identity of her Christian best friend in order to pass herself off as a nanny in the Ukrainian countryside. She is discovered by a farmer's brother who takes the girl in the back of a wagon to their county farmhouse where she is taken in by Pavlo (Eryk Lubos) and his young wife, Nadya (Michalina Olszanska).

She tells the couple her name is Manya and that she's escaped the horrors of a new stepfather. Nadya is most suspicious and tries to catch her in a lie at every turn. She feeds her pork, asks her to make the sign of the cross, takes her to church, and has her help her young sons with their evening prayers, all of which "Manya" is able to do, albeit not entirely convincingly. The couple, despite their doubts, keeps her even though they are aware of the dangers of harboring a Jew. 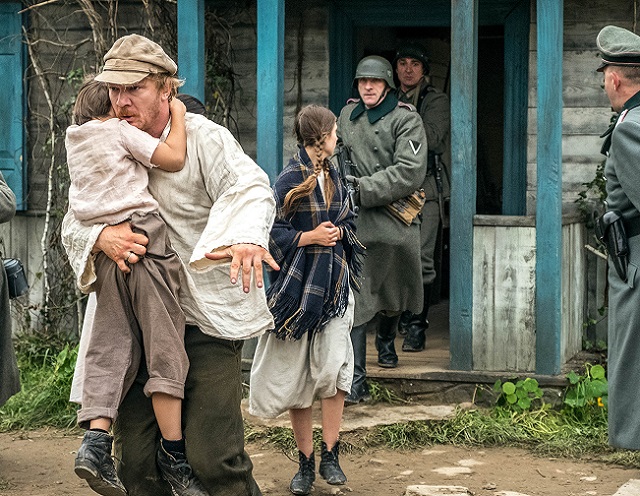 Eryk Lubos as Pavlo in Steven Oritt's film "My Name Is Sara" now in wide release.

There are also secrets within the marriage of Pavlo and Nadya and the Germans harass the farmer by taking his livestock and ripping him off when he tries to sell his wares at the market.

Life is tough for just about everyone in the film, except the Germans.

There's the danger of discovery that keeps up the suspense for the 111-minute running time of the movie.

Zuzanna Surowy who plays Sara, with her shocking blue eyes and complete devotion to the role was an amazing find for the filmmakers. Oritt says, and not surprisingly, that the role of a 13-year-old Sara was the most difficult to cast.

"Our initial attempts to find a professional actress were unsuccessful, so we held open calls in Poland, seeking over 650 girls," he explains in press notes.

"Among them, we discovered a talented young woman who despite barely speaking English gave an exceptional performance for a first-time actress."

Zuzanna's introduction to being a film actress and discovered while in high school has forged her career path: she is now studying at the University of Gdansk film school in Poland.

"My Name is Sara" is a beautifully filmed movie and a magnificent story of resilience, bravery, and the will to survive.