Multiple Characters In '¡Fuácata!' Find Themselves at Home at Actors' Playhouse 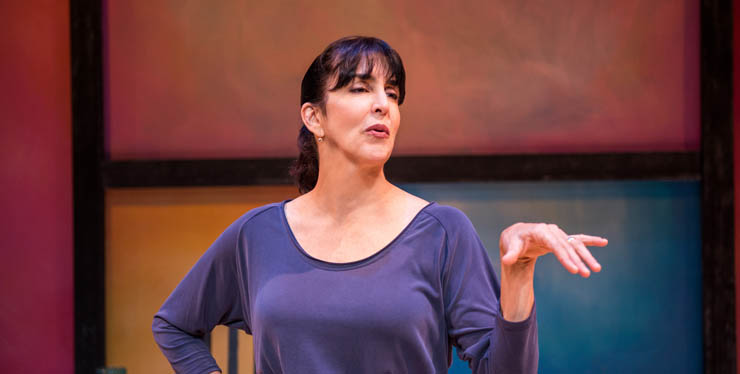 'Â¡FuÃ¡cata!': Or, a Latina's Guide to Surviving the Universe" runs through Sept. 12 at Actors' Playhouse in Coral Gables and stars Elena Maria Garcia.(Photo by Justin Namon)

Rooting for a âSuper Latina Super Heroâ might strengthen resolve during a time when Cubans are openly demonstrating against decades of mistreatment by the countryâs government leaders.

In fact, Miami-area residents can find her basically in their backyard. Specifically, these days she is on stage at the Miracle Theatre in Coral Gables, resilient in her quest for her regular, invigorating, but suddenly elusive cafecito. Defy her at your own risk.

But who would want to oppose Elena, the wearer of many hats, including playwright and owner/operator of âElena Plans Big Things?â Indeed, this âsuper Latina super heroâ is a sympathetic, winning character, as she is proving in Actorsâ Playhouse at the Miracle Theatreâs funny and touching production of a timely, hilarious, and moving one-woman, many-character play which never gets preachy or too political. Its title is " 'Â¡FuÃ¡cata!': Or, a Latinaâs Guide to Surviving the Universe." It runs through Sept. 12. 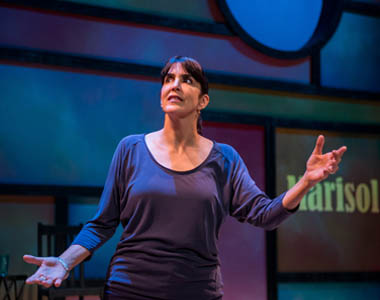 Elena Maria Garcia, the showâs star, co-author, and lead character, who bears a resemblance to actress Mercedes Ruehl, is giving a tour-de-force performance in a show that requires her to play more than 20 characters. Among the artists whose work supports the performer are Rebecca Montero. Her mood-enhancing, focused lighting guides our eyes to appropriate places onstage. Also, co-author Stuart Meltzer, Zoetic Stageâs artistic director, directs the show with an attention to detail, while deftly pacing the production.

Often during the play, the actress portrays more than one character at a time. But the multi Carbonell Award-winning performer makes it look easy. Indeed, she seamlessly slips into and out of each characterâs skin by, for instance, altering her voice and changing her posture. Also, Garcia, who demonstrates deft comic timing, expertly modulates her voice to sound like everyone from a âtiny, Cuban man with an extremely raspy voiceâ to a seductive, elegant woman in her 60s.

At this point, it might help if you know what the first word of the playâs title means. âFuacataâ is a Spanish word that basically means a back-handed slap designed to capture the receiverâs attention. Figuratively, giving such a âslapâ helps the playâs main character accomplish a variety of things. They include getting that ever-important, early-morning cup of cafecito. 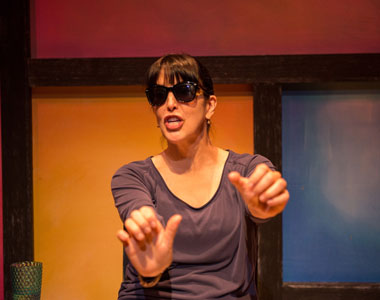 Elena Maria Garcia plays more than 20 characters in Â¡FuÃ¡cata! or A Latina's Guide to Surviving the Universe' now at Actors' Playhouse at the Miracle Mile Theatre. (Photo by Justin Namon)

This roughly 90-minute play (no intermission) offers more than a glimpse into Elenaâs life, zeroing in on a particularly busy day. Some of the playâs humor stems from universal recognition.

âHow many of you need your cafÃ©cito as well,â Elena asks the audience. Chances are, many in a given audience need that âpick me upâ to kick off their day in a positive way.

Garcia also finds humor in our endless attempts at dieting, our love-hate relationships with those near and dear to us, how we sometimes fail at seemingly simple tasks, and how our efforts to celebrate diversity may not always be sincere.

While Elena speaks Spanish during portions of the show, she always translates words and phrases. And you do not have to be Hispanic to appreciate the playâs humor and pathos. However, it might help if you enter the theater knowing what âBoricuaâ means. Garcia uses the term but doesnât define it. Boricua is a term used to mean âPuerto Rican.â

This play takes place in the present. Some moments may seem so relevant to these uncertain times that we find ourselves squirming. For example, Elena, as part of her event planning business, strives to help an elderly couple celebrate their 50th anniversary party. Elena learns that the Goldberg anniversary celebration will include 40 more guests than the couple originally anticipated. 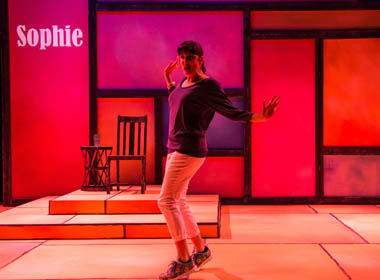 Michael McKeever designed the set for the Actors' Playhouse production of Â¡FuÃ¡cata! or A Latina's Guide to Surviving the Universe' (photo by Justin Namon)

âThat brings the total to 100!â Elena notes. âThereâs no possible way we can fit 100 people in this hall. I donât think there are that many chairs available.â

However, these days, as weâre living through a pandemic, weâre more concerned about crowding endangering our health or even our lives than finding more chairs to accommodate a larger crowd.

Meanwhile, another type of crowding â traffic â might annoy us to the point that we overlook the person selling something at a stoplight. Naturally, we have no way of knowing that personâs background. In "Fuacata," âMarisol, The Water Girlâ is such a person. Her backstory is haunting and eye-opening. And she makes us reconsider what we value most.

âThis is my stoplight for three years,â says Marisol. âI sell water from 10 in the morning till sundown. I donât complain. Iâm free. Freedom to most people is like bottled water. But for me, it was a dream. In my country, I was trapped. As a woman, I was a prisoner in my own home. If I went outside, I would be taken, raped, forced to sell drugs, or even killed.â

In such a world, filled with uncertainty and danger, we often need humor and inspiration (often in the form of family) to get us through each day. "Fuacata" reminds us anew of this, and also offers some hope for the future when a character named Monica talks about her young daughter. As Garcia writes, the 10-year-old âis terrified and full of anxiety.â Why are children locked in cages? is among the girlâs questions. 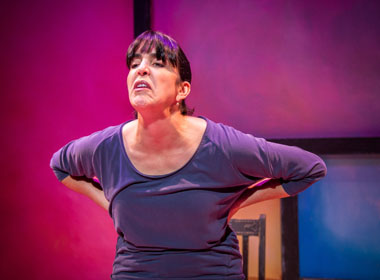 The play received its world premiere in 2017 at Miami's professional, nonprofit company, Zoetic Stage, and is now at Actors' Playhouse through Sept. 12. (Photo by Justin Namon)

âI donât have the answers. But she brings me hope. And I tell you something, she doesnât run away like I did. She fights for what she sees that is unjust or unfair. She fights with grace, intelligence, and acceptance.â

Ultimately, "Fuacata" is about the need for humanity to come together -- to embrace our differences, but also to stress how we are similar.

Through his scenic design, Michael McKeever illustrates the idea that, while people are different, they are also similar.

McKeeverâs minimalist set includes tables and chairs, a couple of which suggest a car. But the central set piece is a wooden structure that sits upstage. It is a projection board, but it also includes what resembles stained glass windows that take on different colors. For instance, with a character change, the windows change color. While the windowsâ colors are similar, they are also different, sometimes in subtle ways. This is true of humanity as well.

âYou know, life gives you a good backhand every now and again,â the character Monica says.

But in this play, Garcia and Meltzer seem to say that, in the end, how we respond to those fuacatas is what is most important.

Fuacata! Or a Latinaâs Guide to Surviving the Universe runs through Sept. 12 at Actorsâ Playhouse at the Miracle Theatre, 280 Miracle Mile in Coral Gables. For showtimes, show dates, ticket prices, and other information, go to www.actorsplayhouse.org, or call (305) 444-9293.