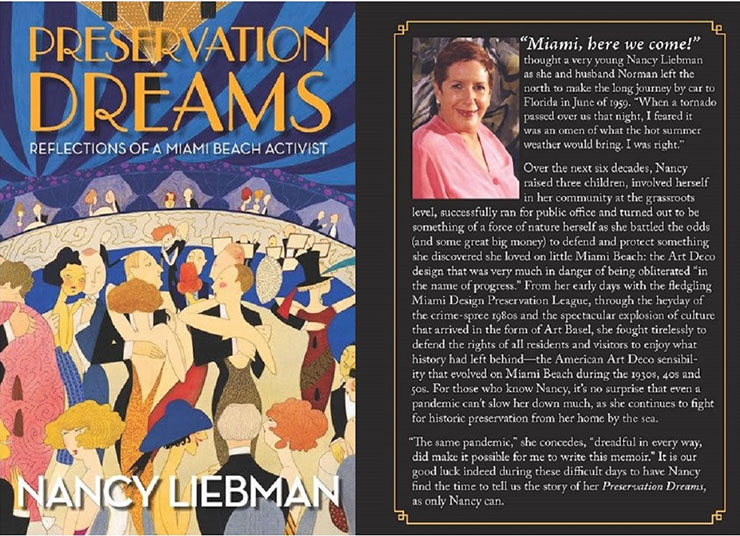 Nancy Liebman's latest book is required reading for anyone interested in the recent history of Miami Beach and in its behind-the-scenes goings on. And, full disclosure: I have known the authorfor many years and was at the founding meeting of Miami Beach United, the citizens group she founded in 2012.

Liebman, perhaps best known and most respected on Miami Beach for the eight years she spent on the City Commission and for her tireless work with historic preservation, dating from the time of the legendary Barbara Capitman, founder of the Miami Design Preservation League, has been there as a community activist, an activist par excellence. She knows what happened and knows where the bodies are buried. (And, I digress slightly, but what a book THAT would make, digging up those bodies!)

"Preservation Dreams: Reflections of a Miami Beach Activist" is a short book (only 115 pages) of her long list of achievementsÂ â of the people she knew and worked with and the issues she tackled head on (and it was always head on with Nancy!) â serves, again, as a basic primer of the last 60-plus years of Miami Beach history. She arrived on Miami Beach in the summer of 1959 with her husband, a medical specialist about to take up an internship at Jackson Memorial Hospital. Liebman had been teaching second grade in New Jersey and would be interviewing for a teaching position in the area.

1959 ... and racial segregation and anti-Semitism were alive and all too well in south Florida.

She interviewed for a private school and was asked her religion. Upon telling the interviewer that she was Jewish it was made clear to her that "your kind" was not what "this school" hired.

Jews were, clearly, not welcome everywhere. She successfully found a position in Allapattah, at a public school, and began what would be an eventful journey, from teaching seven-year-olds to going on to be a PTA president (at Biscayne Bay Elementary), to raising three children, to participation in historic preservation, working with such preservation icons as the above-mentioned Capitman and others. (A lovely feature of this book are the many photographs of the players with whom the author interacted and worked with and the many places she encountered, then and now.)

The positions Liebman held are too many to mention in this brief review, but she went on to work with several community action groups and to be a member and then head of the City of Miami Beach's Historic Preservation Board. (She is presently a member of the Miami Design Preservation League Board.) One of her crowning achievements, almost ten years ago, was that idea for a citizens group which she dubbed Miami Beach United, a group that has become a powerful community action organization which stays abreast of city issues, holds candidate forums, and does a valuable up-dated commissioner report card that informs citizens who has voted how on what and then goes on to rate the votes.

The only disappointment of this book is that it is too short.

She does go into detail on some relevant issues, such as the attempted aggressive takeover of the MDPL board by a group determined to install its own board and oust the duly-chosen executive director, which this reviewer, having been part of this dramaÂ â and the drama never ends on Miami BeachÂ â much appreciated reading.

Liebman is always there, in the forefront of and such a dedicated voice for historic preservation, a tireless worker for the cause, a cause so important to the international reputation of the Miami Beach Art Deco movement; we owe her a great deal. (The forums she continues to hold on preservation issues are timely and informative and contribute greatly to the Art Deco movement fabric.)

And a final word about the gorgeous cover of this memoir, a cover very much in the Art Deco spirit. Bravo! It is striking and does live up to the book's theme and to its terrific activist author. Brava to Nancy Liebman, also, for sharing her life and dreams with us.