The images have the sheen of a postcard book of a past that never was. A hotel lobby in Monte Carlo, spic and span. Its outdoor dining area, tables impeccably laid out. A dip in frigid waters as the waves crash almost as if on cue. A bedroom concealed by a mirrored entrance, swathed in silvery hues, chic and sophisticated, but also as cold and intimidating as its deceased prior owner. 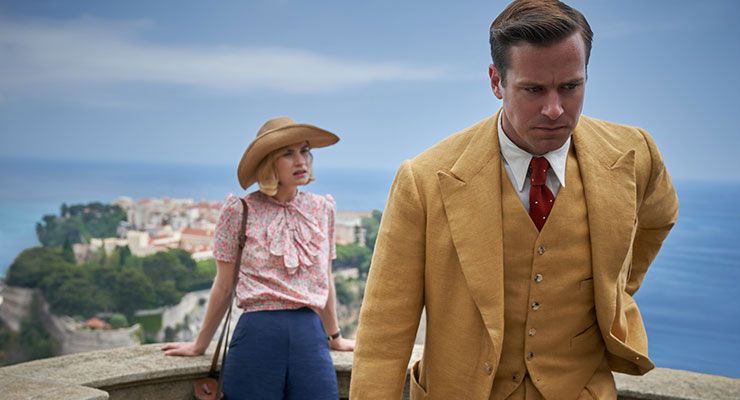 Not a strand of hair is out of place in âRebecca,â Ben Wheatley's new adaptation of Daphne du Maurier's exquisitely written novel, but do its saturated colors, posh 1930s couture and balmy vistas do justice to the source material? The âFree Fireâ and âHigh-Riseâ director, known for putting his brawny, man's-man imprint on work that spans a pretty wide array of genres, felt compelled to get out of his comfort zone and take on a property that's already been mined, exceptionally well, by Alfred Hitchcock back in 1940. Hitch's first movie for a Hollywood studio was, astonishingly, the Master of Suspense's only feature to win the Best Picture Oscar.

Big shoes to fill, both behind the camera and in front. You may have heard of the headliners inÂ  the 1940 production: Joan Fontaine, Laurence Olivier, Florence Bates and Judith Anderson, the latter sensational as one of Hitch's most iconic antagonists and, for those with a serviceable gaydar, a queer character with strongly hinted unrequited longings. The cinematographer, George Barnes, would go on to shoot Hitchcock's âSpellboundâ and the 1953 adaptation of âThe War of the Worlds.â Franz Waxman's haunting score gets under your skin as insidiously as Anderson's piercing line delivery.

Daunting to take this on, with understandable pressure to deliver something that stands on its own, away from the vast shadow of its acclaimed predecessor. If you sense some affection for the older version, that's because it was the subject of the first review I ever wrote for a film class, during my junior year of college. I would go on to write about it more at length in grad school for Dr. William Rothman, the professor at the University of Miami's School of Communication who wrote the book on Hitchcock. Literally: it's called âThe Murderous Gaze.â 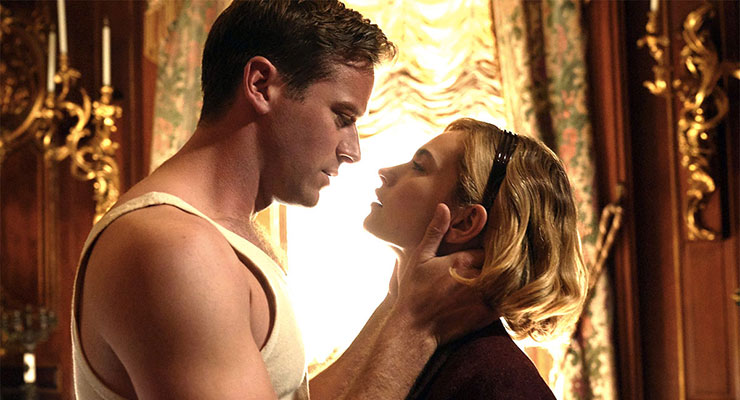 Thus, it pains me to report Wheatley's self-described âmodernâ take on the material is a wash, its lush imagery unable to compensate for the emptiness underneath. It's as vacant as Bates Motel before Marion Crane pulled in on that rainy night. It's a mystery romance that bungles the love story and flattens the mystery in dull connect-the-dots fashion. It plays like an extended episode of âDownton Abbeyâ devoid of Julian Fellowes' wit and snap. 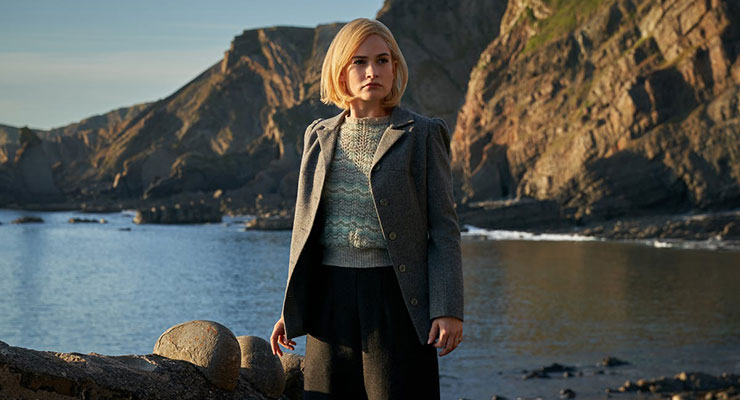 The new âRebeccaâ actually features a âDownton Abbeyâ vet, âBaby Driverâ star Lily James, as the unnamed protagonist, du Maurier's blank slate of a narrator, purposefully left nameless by the author. James might have looked good on paper, but her wan, matter-of-fact voiceover has little allure and zero weight. It screws up the book's opening line, one of the most transporting in English literature: âLast night I dreamt I went to Manderley again.â The narrator is referring to the estate where the man who would become her first husband, Maxim de Winter, lived with his first wife, the film's titular character. Played as a taciturn widower haunted by his recent past by Armie Hammer, his interest in the future Mrs. de Winter is what sets the story in motion. 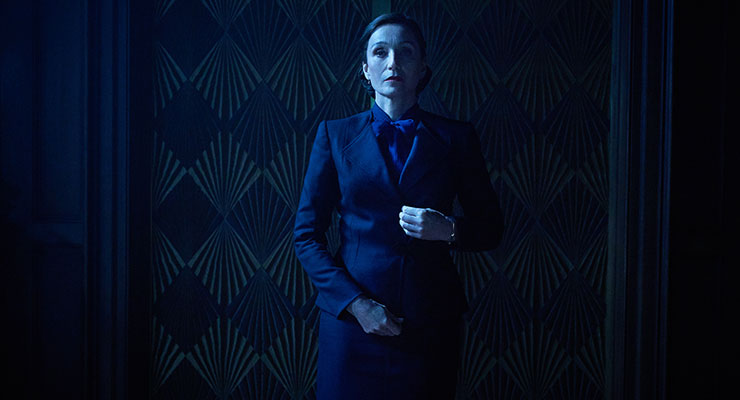 Cue the manicured spaces of Monte Carlo circa 1938, where the idle rich go for leisure, and where James' character finds herself tending to the frivolous needs of the haughty Mrs. Van Hopper (Bates' role, played with gusto by Ann Dowd, who lands on the right side of caricature). In âThe Devil Wears Pradaâ terms, James' ingenue is Anne Hathaway to Van Hopper's Meryl Streep. The first act, which follows the surreptitious courtship between James' orphaned, inexperienced assistant, determined to get ahead in life, and Mr. de Winter, who appears to be dwelling beneath a dark cloud, despite the ray of sunshine that's just walked into his life and, it cannot be underestimated, some dapper attire. Hammer pulls off a mustard suit, a bull's-eye by costume designer Julian Day, and looks photogenic enough next to James, but there's no spark to their scenes together. The camera is awfully fond of Hammer (so am I as it happens), a dependable and winsome screen presence, but try as he might, the man can't do brooding, which is kind of a requisite if you're going to play Maxim de Winter. Much like the rest of the film, he stays on the surface.

The new couple's whirlwind romance takes them to Manderley and under the disapproving microscope of Mrs. Danvers, head housekeeper and top groupie of the first Mrs. de Winter. Kristin Scott Thomas capably slips into Anderson's role and smartly underplays the part. The Oscar nominee even finds some layers of ambiguity that elude the rest of this production. She appears to be channeling Geraldine Chaplin, a departure from Anderson's more rigid portrayal that nevertheless is pretty anemic in the spine-tingling department. She does what she can under the dreary circumstances. 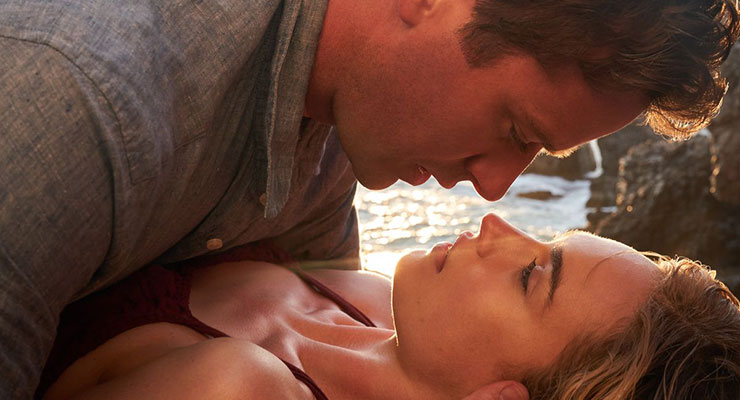 If the first section of âRebeccaâ is marred by a lack of chemistry and a miscast lead, what follows is even more erratic and ill-conceived. Wheatley assaults the viewer with these cheesy visuals, presumably of Rebecca herself, her face turned away from the camera, dressed in a stylish ruby dress that screams âhaunted house.â Editor Jonathan Amos' jagged cuts are ostensibly meant to unsettle the viewer during these dream sequences, but they just underscore how shallow and literal-minded the filmmakers' interpretation of the text is.

What follows is a flat-footed cat-and-mouse game between the new Mrs. de Winter and the wilier Mrs. Danvers. The screenplay, credited to Jane Goldman, Joe Shrapnel and Anna Waterhouse, doesn't exactly erase Danvers' queerness, but by stressing the character's presence in Rebecca's life since she was a girl, repositions her obsession as more nanny-esque and maternal. That's right: the 1940 film is more progressive and bold than this hollow FabergÃ© egg of a costume drama. 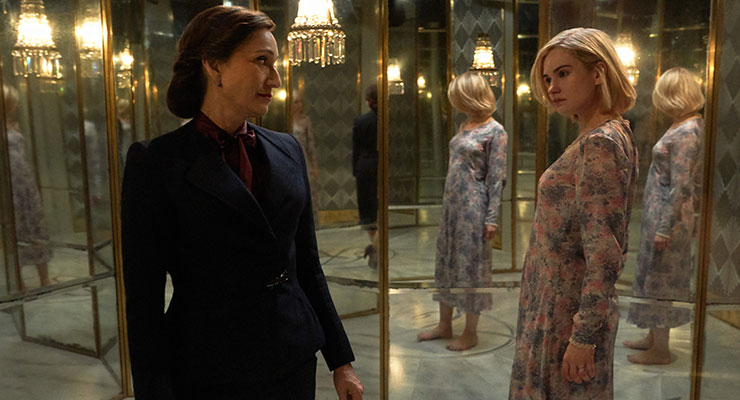 As the new Mrs. de Winter begins to uncover more sordid details about Rebecca and the nature of her demise, Wheatley buries the film under one police procedural mediocrity after another, including court hearings so banal they make a âLaw & Orderâ episode feel like âAnatomy of a Murder.â It's the kind of thing Hitchcock could pull off in his sleep, but Wheatley doesn't even manage a fraction of the intrigue. He takes the James character's lack of identity and applies it to this disposable period piece, a gallery of pretty pictures in search of a personality of its own.

Ben Wheatley's âRebeccaâ is now streaming on Netflix. According to IMDb, James is currently staying on the English costume drama wavelength. She's filming a miniseries adaptation of the Nancy Mitford novel âThe Pursuit of Love.â Hammer is not far removed. He can next be seen as part of the all-star ensemble cast in another mystery: Kenneth Branagh's screen adaptation of Agatha Christie's âDeath on the Nile.â