It's hard to imagine what Vizcaya would have been like one hundred years ago when fully functioning without being from the era or taking a history lesson. Walk through the estate today, and you'll see the remnants of a bygone era on display as if they were stilllifes, inanimate and fixed. The beautiful furniture seems too small for modern day people, and the old musical instruments-a harp, harpsichord, and dulcimer-look too fragile to touch. They are devoid of life. The newest exhibit opening this week at the museum seeks to awaken their functionality along with our senses. It also entices curiosity about what the house would have been like during the Roaring '20s, when teeming with sights and sounds.

"Overload" is the 2017-2018 Contemporary Arts Program (CAP) exhibition at Vizcaya Museum and Gardens, curated Gina Wouters. It will be on view Dec. 6, 2017 through April 2, 2018. Wouters explained that she thought of the idea for a multi-sensory exhibit to contrast the static element present within the corridors and rooms of the estate turned museum with engaging sensory stimuli. She wants the dormant spaces to come to life in people's minds by giving them an interactive experience resonant with the original architecture. Four major installations cater to the senses of sight, touch, and sound providing a stimulating exchange between visitor and house. For the first time in the CAP, the exhibit continues the Deering legacy of bringing international artists to South Florida; two of the artists involved are Dutch. 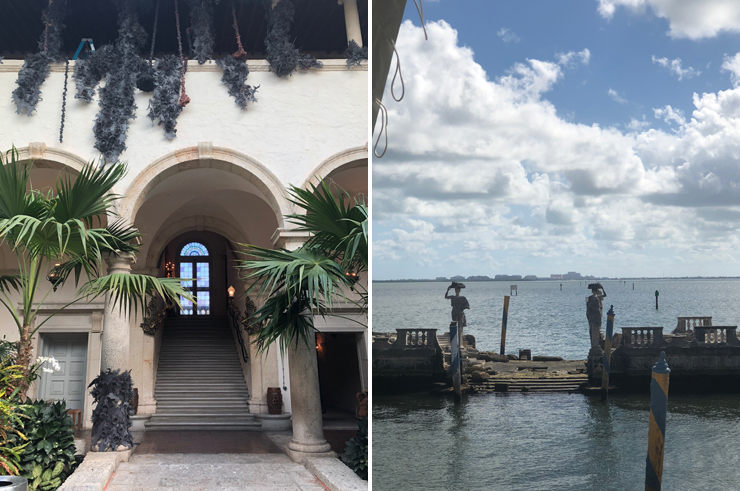 In an installation called Liquid Garden, Dutch artiste Tanja Smeets alludes to the tropical scenery surrounding Vizcaya. Her work also mimics the various decorations around the house that have a tropical element like the palm tree wallpaper and golden-leafed light fixtures. Her felt, plastic, and rope plants, hanging from the corridors of the main house, are meant to induce oneâs tactile senses, and visitors are invited to touch the art.

On another level, the installation gives rise to a pressing issue for the historical villaâclimate change and rising sea levels. The latest hurricane Irma caused major destruction to the Barge as well as some of the surrounding edifices. The boat looking construction decorated with mermaids appears to be drowning. Smeets' flowing plants appear nautical as if they could be seaweed or corals coming out from the ocean and taking over the space, a very possible result of environmental degradation in the future.

While one wonders about the past at Vizcaya, one can't help but muse on the future. Arnout Meijer is another Dutch artists participating in Overload. His work 46020 ft3 cyan/yellow explores the relationship between sight and light with colored films placed over the massive waterfront windows at the estate.His work invites visitors to gain a new perspective of the scene through the glass. The visions will change as the position of the sun and moon alternate in they sky.

David Brooksâ Of Discriminating Artistic Feeling consists of three massive cages, resembling the elaborate enclosures Deering had built for the animals he kept at the estate. They invoke the spirit of those animals, including owls, doves, monkeys and macaws, who made constant noise that often bothered the wealthy industrialist.

Finally, Orlando Jacinto Garcia will produce an orchestrated melodic track in the old music room called Deconstructed Strings. There will be motion activated spots that will play his composition, which includes samples of the original instruments, for those passing through the antique space. He also created an arrangement for a string trio on cello, violin, and viola, as well as electronics, utilizing nautical sounds to be played at the swimming pool. 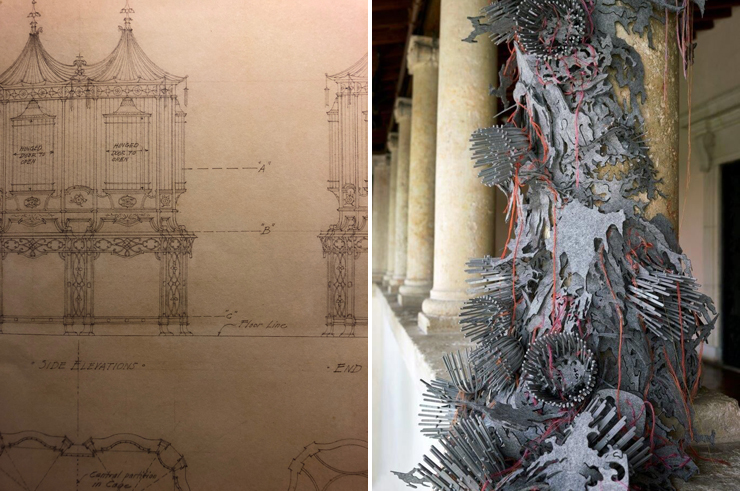 Check out the extravagant multi-sensory exhibit, the final one curated by Gina Wouters, who has been curating Vizcaya's Contemporary Arts Program (CAP) since 2013, but is now off to Tennessee. There will also be some programs to accompany the display including a performance in the pool grotto early next year.

An opening night event will be held Dec. 5, 2017 from 7 p.m. to 10 p.m. where guests can meet the artists and have a first-look at the exhibition. Tickets for opening night are $10 for the general public. Visit vizcaya.org for more information.