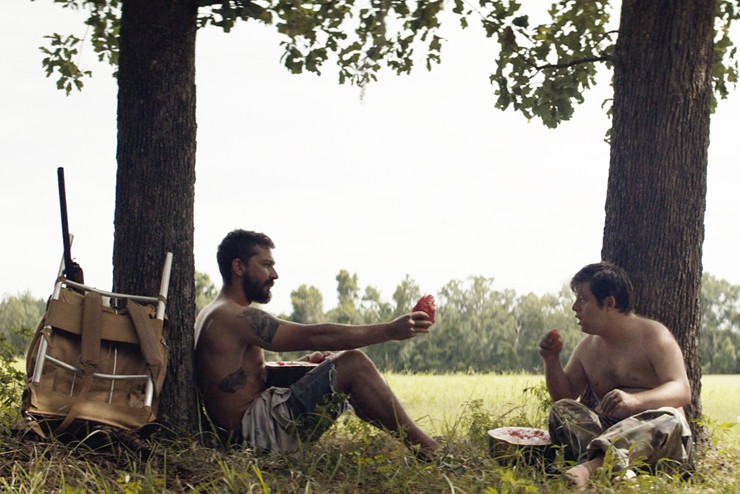 To varying degrees, filmmakers ask viewers for a leap of faith. They cast actors who may not resemble the real-life or literary figures they're playing. They might play fast and loose with choronology and accuracy when it comes to depicting historical events. Some might change the ending of popular novels to better fit their vision. (Remember that Demi Moore-Gary Oldman âScarlet Letterâ production from 1995? How about that Louise Fletcher-fronted adaptation of âFlowers in the Atticâ from 1987? No? Consider yourself lucky.)

So what to make, then, of the whoppers that directors Tyler Nilson and Michael Schwartz expect audiences to swallow in âThe Peanut Butter Falconâ? Their picturesque Outer Banks yarn, boasting an enviably overqualified cast and a pervasive Mark Twain fetish, piles on the implausibilities and can't resist descending into Amerindie preciousness, especially in the early going, when it plays like a square-jawed, overly idealistic student film. And yet, the affection the filmmaking duo display toward their characters and setting shines like a beacon. Cynics need not apply. 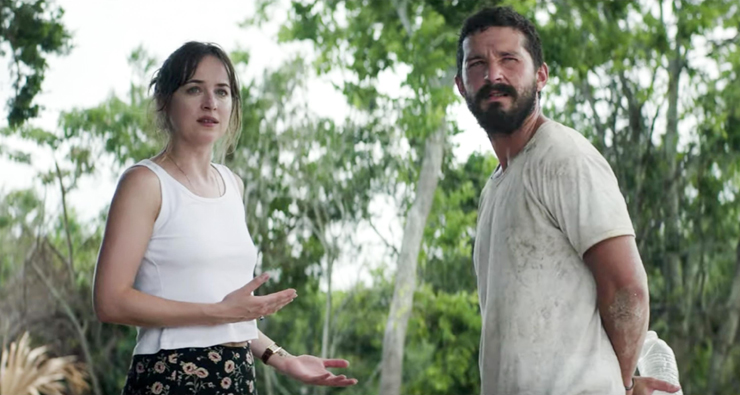 Ads for the film may highlight the involvement of Shia LaBeouf as a trouble magnet with guilt issues and Dakota Johnson as a retirement center caretaker with a heart of gold, but the film's catalyst, a young man with Down syndrome, is played by South Florida's own Zack Gottsagen, here making his feature film debut. The 34-year-old capably embodies Zak, a man 12 years his junior, placed by the state in the aforementioned senior citizen facility because he has no family left to care for him. He dreams of fleeing to become a professional wrestler like his guru, The Salt Water Redneck (Thomas Haden Church), whom he watches obsessively on a worn-out VHS tape. With a little help from Carl (the suddenly prolific Bruce Dern), a gruff retiree with a background in engineering, he makes his getaway. Nearly in the buff.

Wearing nothing but skivvies, Zak soon crosses paths with Tyler (LaBeouf), himself on the run from two crab-fishing ruffians over some mayhem involving crab traps, flaring tempers and bruised egos. The standoffish Tyler thinks he has no need for the half-naked dude being tracked down by Eleanor (Johnson), who has been tasked by her boss to find Zak in the hopes of avoiding the authorities getting involved. Zak, meanwhile, brings out a vulnerable side of the guarded Tyler. A fraternal instinct kicks in, so off the two men go on their own adventure down river, with the mustache-twirling heavies and a harried Eleanor on their tail. (East Georgia unobtrusively stands in for North Carolina.) 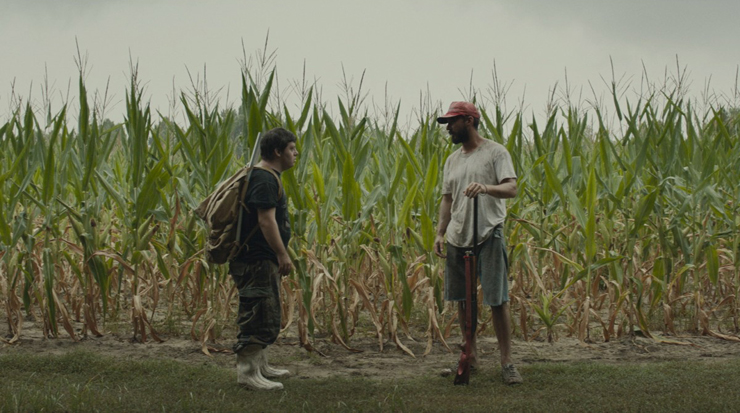 If you're buying any of this, consider yourself among this middlebrow production's target audience. I had a pretty tough time watching Nilson and Schwartz turn their narrative into a pretzel to make it possible for the film's central trio to interact. But even as the way Zak, Eleanor and Tyler come together strains credibility, the directors sustain an affable, easygoing vibe that takes advantage of the stars' disarming appeal.

Gottsagen's performance alternates between moments that are genuinely affecting and others where it looks as if he's just reciting his lines. But to his credit, he holds his own opposite some pretty big names. His rapport with LaBeouf is particularly endearing. In thematic terms, âPeanut Butter Falconâ marks a return to the family-friendly role that put the âTransformersâ star on the map: the 2003 screen adaptation of the young adult novel âHoles.â It's his most relaxed, engaging performance since his strong turn in Andrea Arnold's âAmerican Honey.â 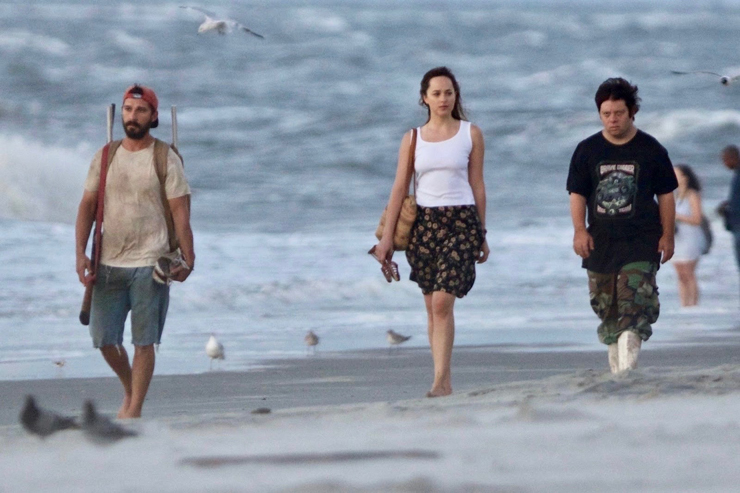 Johnson has the more thankless and underwritten role, but the âFifty Shades of Greyâ and âA Bigger Splashâ star embraces the film's sense of camaraderie. In other words, she's a good team player. âThis is not 'Lord of the Flies,'â Eleanor blurts out at one point, bringing a much-needed reality check. In an ill-advised move, Nilson and Schwartz encourage a romantic subplot with LaBeouf that, thankfully, takes up limited screen time. The film is at its strongest when it allows the characters to chase that restless spirit of mischief that fueled Huck Finn and Tom Sawyer's Mississippi tales, or at least a contemporary variation of it. It never quite shakes the saccharine earnestness of an after-school special, but there's a no-frills lyricism that glues the contrivances together. (Kudos to cinematographer Nigel Buck's robust widescreen lensing.)

âThe Peanut Butter Falconâ achieves some thematic depth as it cruises along. Zak, Tyler and Eleanor discover they're united by their own personal losses, and suddenly a carefree escape from society reveals a bittersweet undertow. This is when the film finally snaps into focus, thus making it very difficult for this crabby reviewer to hold a grudge.

The problem is that the more hackneyed aspects of the narrative keep butting in, to the point that they break the movie's sun-kissed spell more than they advance the story. For instance, as one of the baddies gunning for Tyler, âDeadwood'sâ John Hawkes has little to do beyond glaring and conveying the precarious state of the region's fishing industry. 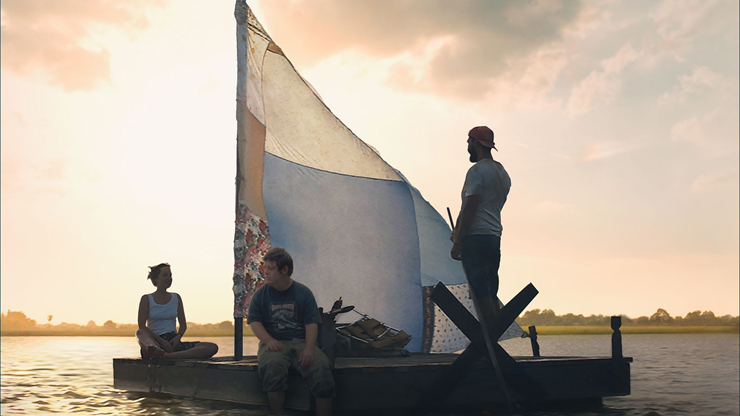 In true underdog fashion, âThe Peanut Butter Falconâ builds up to a climactic showdown against the ropes that makes the jump, quite literally, into magic realism. The irony here is that the most unbelievable turn of events, when the film's awkward moniker finally comes into play, ends up being the most effective. And then Nilson and Schwartz slam on the brakes, steering clear of a more realistic outcome in favor of a tidy resolution. By that point, however, one would have to be a heel to want to deny a happy ending to these three travelers. It's difficult to turn a blind eye to some of the creative lapses on display here, but come on, I'm not made of stone, and against all odds, this fitfully winning crowd-pleaser wore down my defenses. It lets kindness lead the way.

Be In the Room Where it Happens at 'Hamilton'

THEATER: The hit musical "Hamilton" is back in South Florida, this time at the Arsht Center in Miami. Michelle F. Solomon has the review.

CLASSICS: Violinist and Music Director Michael Barenboim teams with the West-Eastern Divan Ensemble of Middle Eastern musicians in a show of strength of creating harmony through chamber music Monday at the Arsht. Marvin Glassman has the story.

An Inside Look at YoungArts Week in Miami

ARTS: See the rising stars of tomorrow. YoungArts Miami 2020 will take place Feb. 25 through March 1 with emerging artists from 12 states in public performances, a film screening, an art exhibition and writers' readings. Cameron Basden has an inside look.