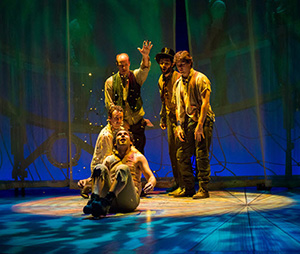 Probably the funniest thing I've seen on stage the past twenty years is Nicholas Richberg as Captain Black Stache, (get it?) the pirate, with his treasure chest. A little accident befalls him and his seemingly endless stream of OMG's takes funny to a level in the heavens. Richberg has the lead in "Peter and the Starcatcher" now playing at Miami's Arsht Center, and lead he does, brilliantly.

The show is a joint production of the Adrienne Arsht Center and the University of Miami Theater Arts Department so we have student actors working with two professional Equity members, Richberg and Tom Wahl. Students they may be, but the kids hang step for step with the pros. 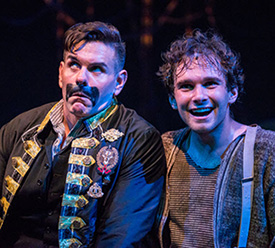 Based on the novel by Dave Barry and Ridley Pearson, this stage version by Rick Elise is a deliciously campy prequel (God, I hate that word) to the advent of the famous Peter Pan.

Played on a wonderfully imaginative set, (a Victorian sea port; A Royal Navy ship, The Wasp; an older sailing ship, the Neverland; ((full rigged models of the sailing ship are sailed? around the stage)); ship's cabins, bilges, decks, bowels and passage ways; a mountain top; a jungle; a crocodile cage; a beach; the ocean above and within; and of course, a stormy night).

"Peter and the Starcatcher" is a two and a half hour feast of music, dancing, joking in a play that would delight most any child. And certainly all adults with a sense of humor. Highlights are too many to count but Mrs Bumbrake's alliteration scene is one, the dancing pirates is another as is the second act opener with the dancing mermaids. Worm eating and vomiting also entrance. 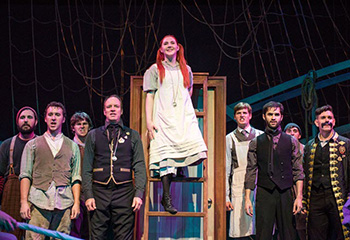 Ten student actors and not an amateur among them.

Fluidly directed by the UM's Henry Fonte with unique music by Wayne Barker. Set design by Yoshinori Tanokura with sound by Matt Corey, lights by Eric Haugen and costumes by Ellis Tillman. The musical director/conductor/pianist is NDavid (no typo) Williams and the percussionist is Mark Schubert. The prop design (including the sailing ships) is by Puppet Network and Monica Soderman.

A well-deserved standing ovation at the end for Peter and the Starcatcher.