In Giancarlo Rodaz's "Peter x Wendy" at Area Stage Company, Captain Hook enters the stage on a skateboard. She is doggedly determined to do away with Peter Pan.

Of course, the villainess has no pity, either, for The Lost...Girls.

Surely, sheâd throw them and their beloved Pan overboard, into the water.

And it really does look like a river or ocean in motion on ASC's Riviera Theatreâs stage. Yes, itâs possible to create that illusion with two or more performers, fully visible to the audience, shaking large sheets.

Of course, creating theatrical magic through minimalism is nothing new to director and visionary theater artist Rodaz. 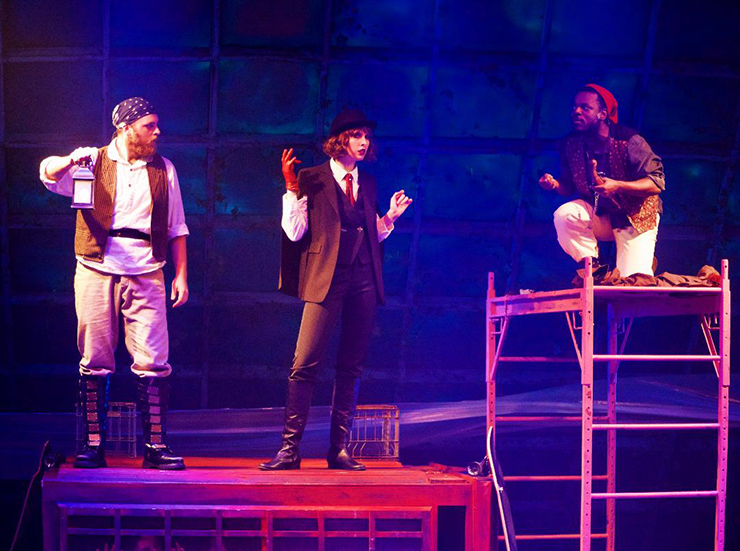 He demonstrates his creativity in the world premiere production of "Peter x Wendy," his mostly strong stage adaptation of J.M. Barrieâs original 1911 novel, "Peter and Wendy."

The versatile Rodaz, ASCâs associate artistic director, has penned an adaptation that is faithful to Barrieâs novel and whatever version or versions of Peter Pan you may have experienced.

As is true with Charles Dickensâ A Christmas Carol, countless adaptations exist of the beloved story featuring the boy who refused to grow up.

To Rodazâs credit, his roughly two-hour live adaptation features the right blend of adventure, tension, magic, action and narration. Apparently, the Silver Palm Award-winning Rodaz knows that too much narration in a stage adaptation runs the risk of stagnation.

However, the play could use more pathos. For instance, the scene in which Pan talks about leaving his mother doesnât quite stick with us. Itâs over too quickly and there isn't a sense of the characterâs vulnerability or sadness. Also, I wanted to hear more regret in Wendyâs voice when, at the end, she informs Pan that sheâs a grown woman and can no longer fly with him.

Until that moment in the play, all the characters are practically in constant motion. They include a stuffed dog (Nana) that a human performer (Jorge Amador) moves about the stage with a leash and communicates as the canine caregiver. Also, a human actor (Valeria Di Babbo) operates an illuminated doll (Tinker Bell) and makes the kind of non-sensical sounds that amount to the fairyâs âlanguage.â 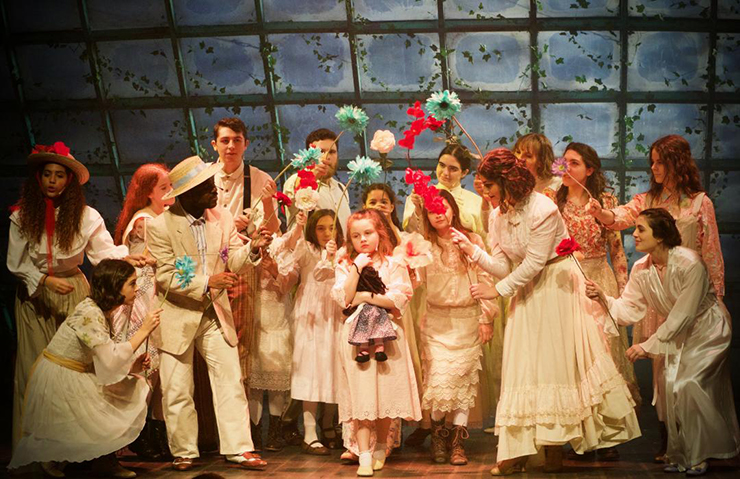 Members of the Peter x Wendy cast appear in a magical scene.

Rodazâs adaptation is a Peter Pan for modern times. For instance, it gives female performers a chance to shine in roles other than the âdamsel in distressâ or victim of abuse at the hands of a husky man. Sure, Pan delights all ages with its beloved characters, action, adventure and the notion of returning to and remaining in oneâs youth. However,part of the story can seem melodramatic and cliched with a male Captain Hook and a potential female victim in Wendy.

That is not the case when Captain Hook is a woman, as Rodaz has chosen. He has created a strong, if villainous female character, allowing an actress to shine in a leading part. Moreover, such welcome changes of pace can hook an audience more.

Curiously, as the feared captain, Katharine Duerr wears no hook. Instead, the performer sports a glove in place of the characterâs bitten-off hand.

Duerrâs Captain is sly, commanding and menacing. Surely, youâll shiver at the sound of her thunderous voice. At the same time, Duerr doesn't create a character who might be too frightening for children in the audience. In fact, the entire show is family-friendly.

Whatâs missing from Duerrâs performance is a comedic, flamboyant brand of villainy that has made Captain Hook an antagonist, but a likable one.

As Hookâs nemesis, a wide-eyed Anjuli Kaufman has created a playful, hyper, mischievous and rambunctious Pan.

Kaufman communicates with her entire body, creating the sense of unbridled youthful enthusiasm.

But Kaufmanâs performance could benefit from nuance. While playing Pan broadly often fits this character, including subtle nuances would add depth and contrast. Also, Kaufman is less convincing while trying to convey the androgynous youthâs vulnerability and sadness. 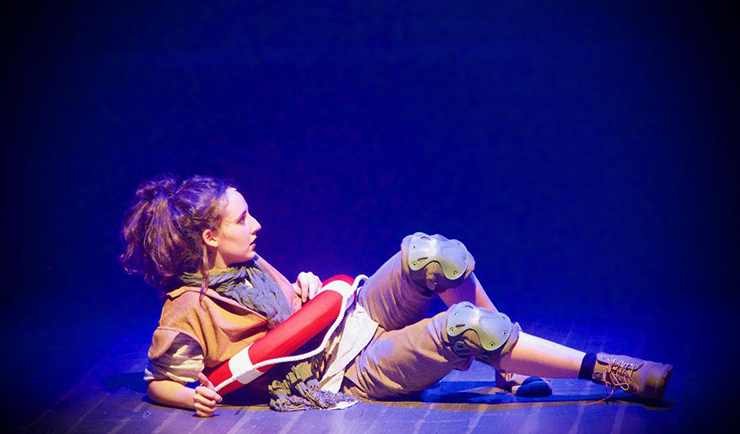 Anjuli Kaufman, as Peter Pan, appears in a scene from Peter x Wendy.

Regarding the child performers, I didnât get the sense that The Lost âBoysâ (played here by girls) truly crave mothers.

Otherwise, while some of the children could work on enunciating, they deliver energetic performances and remain in character. In addition to the children from Neverland, Rodaz has kept the Darling family intact. They include youngsters Michael (a cute and playful Adrian Farrell) and John (a precocious, articulate Elijah Leano).

Michelle Gordon plays their sister, Wendy, as a romantic, dreamy and sensitive young woman who acts motherly toward the kids.

As anyone who has read Barrieâs novel knows, the adventure-filled book begins with the words âAll children, except one, grow up.â

Well, in Rodazâs adaptation, itâs not just humans and animals who grow. His original set, which serves as the Darling residence and other locales, resembles an old greenhouse, complete with muddy green doors, and transparent glass windows adorned with foliage. Birdsâ nests hang from above. Rungs allow performers to climb âinsideâ the greenhouse and the windows apparently also have rungs on the âoutside,â allowing characters such as Pan to climb. The windows conveniently open when necessary.

Rodaz, in addition to writing the adaptation, directed the production and designed the sets, lights as well as costumes. He has opted for simple, multi-purpose structures that fit onstage. For example, a bunk bed with ladders on either side stands for the house which the lost children and the Darling boys buildfor Wendy in Neverland.

The versatile theater artistâs lighting creates focus and he uses colors wisely. Also, the costumes are appropriate for each character.

Sound effects, such as thunder, sound real, thanks, in part, to sound engineer Orlando Hallâs work.

Rodaz creatively uses props. Also, he deftly stages the production by, for instance, highlighting characters by having performers stand atop structures. In addition, the pacing is fluid; you never get the sense that the production drags. And, at the same time, we donât feel like it moves too fast for us to keep up with the action.

Rodaz, through his direction, seems to have emphasized an optimistic view regarding the passage of time. While Wendy and then her daughter, and then her granddaughter, etc. get too old to play with the titular character, at least there will always be future generations of girls to fly away with him.

Certainly, the folks at the highly-respected, award-winning Area Stage Company have reason for optimism. Although they will soon leave their home of 10 years, the Riviera Theater, theyâre apparently excited. A notice outside the auditorium reads that their future home âwill feature a new, fully customized facility, including a performance space, studios, rehearsal spaces, production facilities, and offices. The company will move to Sunset Place in April.