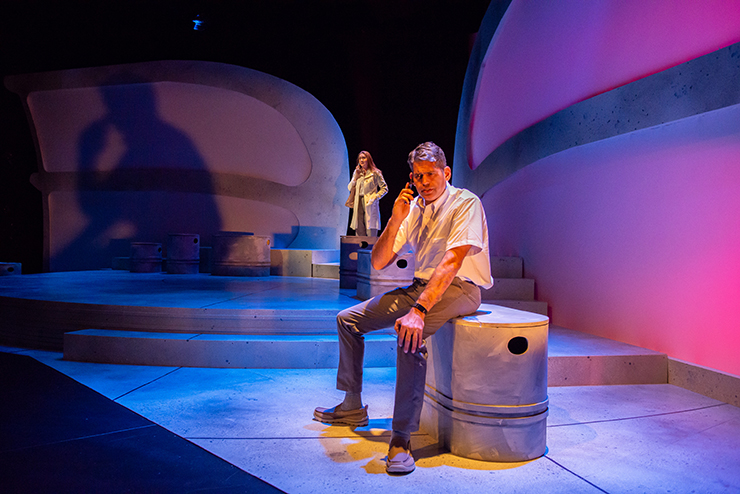 âAmerican Rhapsody,â Michael McKeeverâs latest play, is a sprawling family saga that spans four generations. It's a departure, he says, from the usual subjects for one of Miamiâs most prolific playwrights.

âI havenât written anything this large in scope. Itâs very exciting to address this large a swatch of history, and see it through the eyes of one family,â says McKeever. "American Rhapsody" gets its world premiere beginning Friday, Jan. 13, at Zoetic Stage, in the black-box theater at the Adrienne Arsht Center for the Performing Arts, Miami.

The play tells the story of the Cabot family, and, if there is any resemblance between them and McKeeverâs, well, thatâs not surprising â they mirror the events that unfolded for McKeever, opening with Neil Armstrongâs famous walk on the moon in 1969. But there is also an element of fantasy, as the play ends not in the present, but in the future of 2032.

The play is the result of the pandemic, says McKeever, who has written six plays for Zoetic Stage, the theater company he co-founded with Stuart Melzer, and is part of the Adrienne Arsht Center for the Performing Arts âTheater Up Close Series.â

McKeever is the author of 35 plays, and the winner of a slew of awards, including the Carbonell judges' George Abbott Award for Outstanding Artistic Achievement, along with many Carbonell and Silver Palm Awards.

During the pandemic, the Florida Studio Theatre in Sarasota received federal money and they commissioned McKeever to write a play, telling him âWrite the play you want to write,ââ he recalls. â I had been thinking about this one for a long, long time,â he says.

He says the place sees the American experience through the eyes of a family.

" (It) starts off as the typical, white family, and, over four generations, evolves into one that is much more diverse in color and fluid in sexuality,â McKeever says. âAs the family evolves into a new America, so does its cultural identity as members of other races and sexual orientations marry into and redefine what the family thought it was,â he adds, noting that there were incredible events, like the Supreme Court decision that legalized gay marriage, âwhich, as a gay man living in America, I never dreamed I would see,â says McKeever, who is married to Melzer.

Telling such a sweeping story posed a challenge for Melzer, who is the playâs director.

âDoing a brand new work is always challenging but this is also a big play spanning 60-plus years,â says Meltzer.

âThis is also not a âkitchen sink drama,â where all the family members are in one house. The play is a bit non-linear, and so Iâm creating a place where ancestry plays a role, and not only people, but spirits live. So itâs not only realism; thereâs some surrealism and magic mixed in.â

In the play, each of the actors takes on two roles, or, in the case of Aloysius Gigl, three.

Gigl, who won a Carbonell Award for playing the lead in the Zoetic Stage production âSweeney Todd,â is an accomplished musical actor, but "American Rhapsody," which is a drama, takes him back to his non-singing roots.

In âAmerican Rhapsody,â Gigl plays three roles; the father in the late 1960s and 70s, a gay editor in New York City at the height of the AIDS epidemic, and, in the future, a United States senator, who calls upon the fatherâs granddaughter to run for the Senate.

âIâm accustomed to playing one role, but Michael has written them so differently so that helps. Also, as a director, Stuart (Meltzer) doesnât do things as expected, so there is less emphasis on having to flesh out details; itâs almost as if Iâm playing different aspects of the same personality,â he says.

In addition to Gigl, the other cast members are: Alex Weisman, a Fort Lauderdale native who recently starred on Broadway in âHarry Potter and the Cursed Childâ and currently stars as Frank, the first LGBTQ+ character on âSesame Streetâ; Miami native and two-time Carbonell Award winner Lela Elam, who has appeared in Zoetic Stageâs productions of âMoscow,â and âClark Gable Slept Hereâ; Lindsey Corey, a Carbonell Award winner who was recently in âMillion Dollar Quartet Christmasâ at Actorâs Playhouse; Stephen Trovilian, who was recently in the Actorâs Playhouse production of âNow and Thenâ, as well as part of City Theatreâs Summer Shorts festival; Miami veteran actress Laura Turnbull, along with Carlos Alayeto and Stephanie Vazquez.

âThe story in this play is an optimistic one,â says McKeever. âIâm always reading history and what Iâve learned is that there is a reason that people want to come to America; even when weâre throwing rocks at each other, and it seems weâre at our lowest point, things always get better.â

Meltzer says the Carnival Studio Theater is a fitting venue for "American Rhapsody."Â  ("The work is)Â  epic in scope, but intimate in nature.â

Zoetic Stageâs production of âAmerican Rhapsodyâ runs through Sunday, Jan. 29 at the Carnival Studio Theatre, located in the Ziff Ballet Opera House at the Adrienne Arsht Center for the Performin Arts, 1300 Biscayne Blvd. Showtimes are 7:30 p.m. Wednesday through Saturday,Â  3 p.m. Sundays, and a 3 p.m. performance on Saturday, Jan. 28. Tickets are $55 and $60. Information and tickets at 305-949-6722, or online atÂ arshtcenter.org.