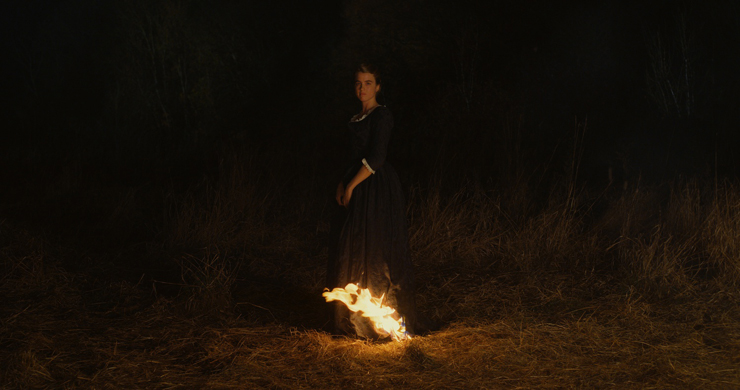 It might be a furtive glance. Or a casual gesture that ends up igniting sparks. A frowned-upon romance might feel like the most natural thing in the world to those grappling with such intense emotions, but when you know that fragile bubble you create around the two of you won't withstand the scrutiny of others, why even take the plunge? Because not doing so is unthinkable, even as you know this fire inside you will be doused by circumstances conspiring to wrest you away from the object of your affection.

The bittersweet agony of first love is a well that filmmakers continue to draw from time and time again. It's particularly ubiquitous in LGBTQ cinema, to the point that yet another coming-of-age/coming out tends to be greeted with a collective shrug. But two international releases that screened this past fall at South Florida festivals transcend their familiar trappings by immersing viewers in settings not known for their laissez-faire attitude toward same-sex couplings. These bonds might not last a lifetime, but their transformative effect on the young lives affected stretch across barriers of time and rigid social mores.

âPortrait of a Lady on Fireâ: The paintbrush sweeps across the canvas in an effort to turn lines and blotches into a representation of a young woman. It's a search for truth, a tireless quest to capture a person's essence. But in this haunting and ravishing period drama from âGirlhoodâ director CÃ©line Sciamma, that quest, which unfolds on a remote island off the coast of Brittany circa 1770, comes saddled with obstacles. Let us count the ways it's a steep mountain to climb. 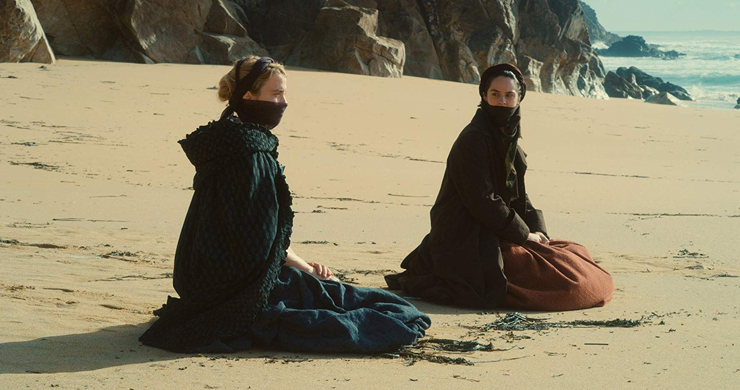 First of all, the artist, Marianne (NoÃ©mie Merlant), is herself a young woman, something that gives pause to La Comtesse (Valeria Golino), the mother of the painting's subject. Second, La Comtesse's daughter, HÃ©loÃ¯se (AdÃ¨le Haenel), has an unfortunate history with prior portraitists and will likely not agree to pose, meaning Marianne will have to pretend to be a companion and paint from memory in secret. Oh, and there's been a recent death in the family that's made HÃ©loÃ¯se even more standoffish, as if the prospect of being married off to a Milanese businessman like merchandise isn't miserable enough already.

Sciamma introduces us to HÃ©loÃ¯se, her back to the camera, along a windswept beach. The sun is shining, but the mood is somber. She looks up at Marianne, guarded and wary. âKeep your distance,â her eyes unmistakably say, though there's a subtle hint at vulnerability. Looks are important, Sciamma underscores throughout. They appear to be the movie's endgame, as the filmmaker strikes a parallel between the exchange of glances between artist and subject, and the act of viewing a film. âPortrait of a Lady on Fire,â which screened late last year at the Miami GEMS showcase and the Key West Film Festival, is particularly interested in the creative process in a way that might cause Francophile cineastes to recall Jacques Rivette's 1991 film âLa Belle Noiseuse,â only far less sprawling. In addition, the absence of male characters, relegated here to background figures, allows Sciamma to explore the female gaze in a space unencumbered by patriarchal disruption. 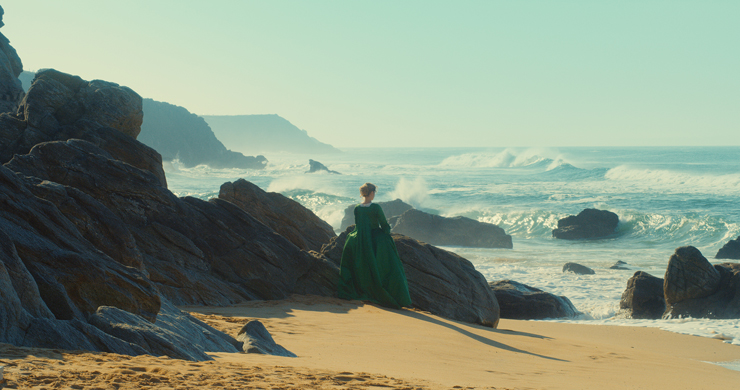 An initial contrast between Marianne as strong and driven and HÃ©loÃ¯se as fragile and troubled gives way to a discovery of affinities between both women. They're both tightly coiled in their own ways, opting to resist opening up for different reasons. Ah, but the heart wants what it wants, and when La Comtesse leaves for Italy, that unlikeliest of outcomes sprouts like a rare desert bloom. Sciamma posits Marianne, HÃ©loÃ¯se and housemaid Sophie (LuÃ na Bajrami) as a subversion to the nuclear family unit in a way that's oddly reminiscent of how Nicholas Ray portrayed James Dean, Natalie Wood and Sal Mineo in âRebel Without a Cause.â

Sciamma has crafted a fiercely intelligent love story that's intellectually stimulating and swoon-inducing in equal measures. Think of a more cerebral variation on âWuthering Heights,â as well as Jane Campion's âThe Piano,â but with a palette that sometimes resembles the work of legendary cinematographer Nestor Almendros. It all builds to a heartbreaking coda that uses Vivaldi's âThe Four Seasonsâ to devastating effect. Sciamma has made her finest film to date, and one of 2019's very best. It's arriving on these shores way too late, but don't let it slip by. Run, don't walk. 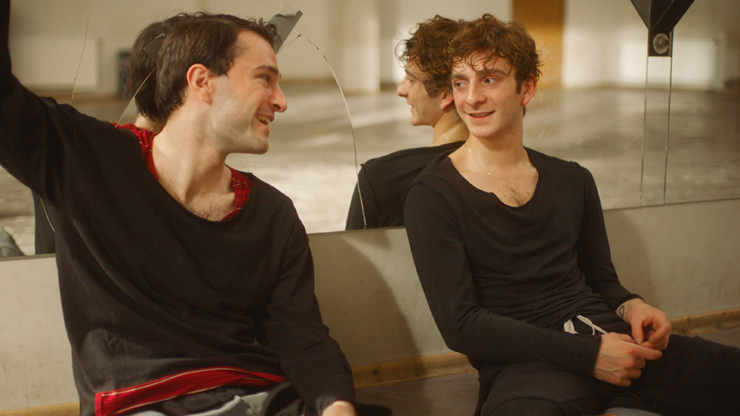 âAnd Then We Dancedâ: From âPortrait'sâ indelible look at fine art's ripple effects, to a compassionate exploration of the Darwinian struggles facing the dancers at the National Georgian Ensemble, this spirited crowd-pleaser from the Republic of Georgia hardly reinvents the wheel when it comes to depicting the pangs of burgeoning sexuality. And yet, writer-director Levan Akin navigates the oft-told narrative with brio, coupled with a refusal to look away from the grim realities of its Eurasian setting.

Our young and impulsive protagonist is Merab (boyishly handsome Levan Gelbakhiani), who has been dutifully putting in the hours to garner enough attention to become a featured dancer at the prestigious company. But years of toil have hardened his technique into mechanical efficiency. His longtime partner, Mary (Ana Javakishvili), is also a girlfriend of sorts, but there ain't no commitment here, just lip service. The hardworking lad, who waits tables whenever he's not practicing his routines, appears to have convinced himself that everything is going to work out, in the romance department and life in general. Like clockwork. Eventually. 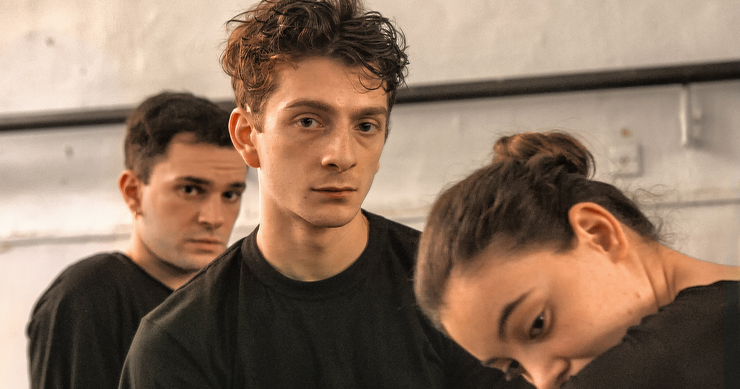 Enter new dancer Irakli (cutie patootie Bachi Valishvili): strapping, virile, undeniably hunky. Whispers suggest he's nothing but trouble, a bad boy, even naughtier because of some past shenanigans involving a male dancer. The gossip reaches Merab's ears, and his ears perk up. But who cares about all that? Their instructor uses Irakli's effortless brawn to illustrate the very qualities Merab is lacking. Merab's simmering resentment awakens his competitive drive, but what Akin also makes clear is that these boys' chemistry is off the charts. In perhaps the film's most thrilling moment, they rehearse a number together in front of their peers, and the sheer joy that shines through their coordinated moves supersedes any potential enmity. It also wears down the viewer's defenses.

Akin, like Sciamma, shows a commitment to the art form. In the celebration of tradition embodied in these dances, he sees a bracing display of skill, but also a reflection of prehistoric prejudices that need to be phased out. The film, which also screened last year at the Key West Film Festival, could have actually used a little more dancing and a little less creaky plotting, especially when dealing with Merab's dysfunctional family. But even as the film takes you exactly where you think it's heading, it does so with a willingness to delve into the interconnectedness of Georgian society, how everyone is on each other's business, how they unfailingly adhere to a succession of rituals. In other words, the details on the edges of the screen, more than window dressing, end up being as important to the sometimes creaky chain of events. 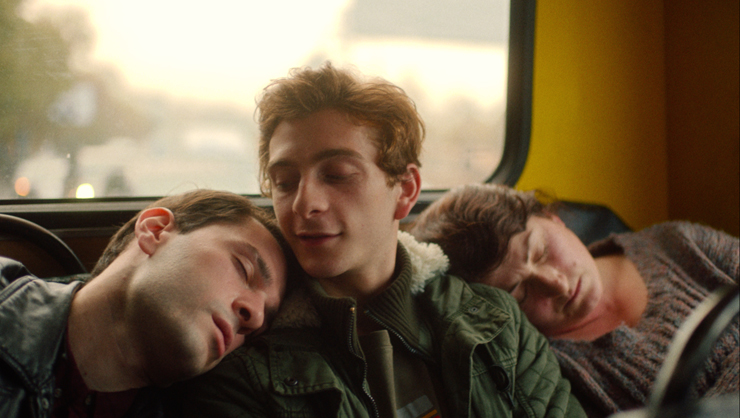 It also helps that Akin refrains from sentimentalizing the bond that grows between Merab and Irakli. There's little hand holding here, and this clear-eyed lack of sentimentality makes the relationship all the more believable, and all the more touching. Because this is ultimately Merab's journey toward discovering his inner strength and self-worth, not Irakli's, and it leads to an irresistible audition sequence that puts a politically charged spin on a similar climactic scene in, of all movies, âFlashdance.â It's an empowering flourish that Akin uses to conclude this winning import, which boasts an entire dance recital's worth of crossover appeal.

âAnd Then We Dancedâ screens Thursday at 7 p.m. at Gramps,Â 176 NW 24th St., Miami, in Wynwood as part of OUTshine Film Festival's GLOW Miami series. Its local commercial run is scheduled to start March 6 at the Cosford Cinema. âPortrait of a Lady on Fireâ starts this Friday at AMC Aventura, AMC Sunset Place and the Tower Theater in Little Havana. It's set to open at additional screens in the coming weeks.