There comes a time every summer season when you want your movies fast, loud and thoroughly dumb. The past two years may have altered the calendar for many film buffs who stayed home and explored other kinds of content, like older cinema or entire seasons of shows on TV or streaming platforms. Some may have even stepped outside their comfort zone with something off the beaten path.

But here we are, at the start of the Fourth of July weekend, and cheaper R-rated thrills of various shapes and sizes have arrived for your viewing pleasure like clockwork. Two new releases, in particular, invite viewers to turn off their brains for a couple of hours. One tosses a handful of fanboy-friendly genres into a blender and hits frappÃ©. The other boasts considerable literary pedigree but underlines its disreputable nature and shock value all the same. If that isn't a sign of things inching their way back to normal, then I don't know what is. Are they worth your time in between get-togethers and outdoor fun? Let's find out. 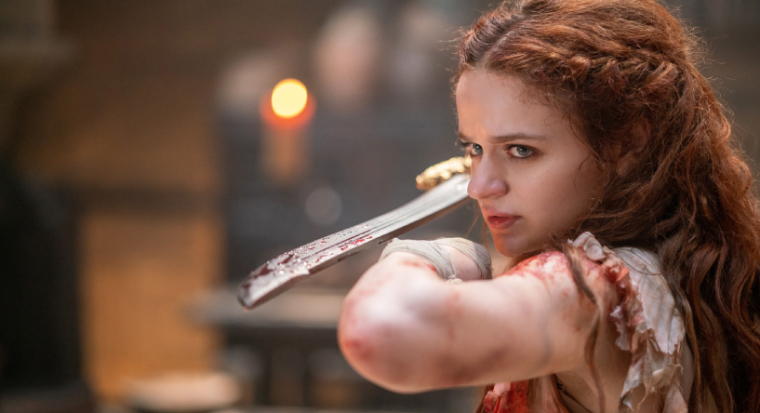 Joey King in a scene from "The Princess." (Photo courtesy of 20th Century Studios.)

She wakes up to find herself locked in a tower, and visions of Rapunzel and her kilometric braids may flash through your eyes. But the nameless protagonist of this bruising action fantasy is not your typical fairy tale royalty, and one thing she decidedly is not is a damsel in distress. Quite the contrary. She revels in kicking butt. Like a lot.

There are, indeed, copious amounts of punching, kicking, slicing, dodging, stumbling, grunting and authority thumbing in this fleet-footed adventure from Vietnamese-born director Le-Van Kiet. This is a restless film, eager to jump from one scene to the next. This is a good thing, because whenever it slows down long enough for characters to have actual conversations, the results are rather basic and, well, kind of vapid. 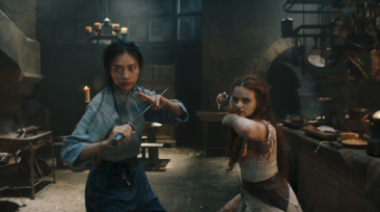 Joey King and Veronica Ngo in a scene from "The Princess." (Photo courtesy of 20th Century Studios.)

But for the most part, The Princess (âThe Kissing Booth'sâ Joey King) in âThe Princessâ remains on the move. Just not right away. First, she needs to find out why she's locked up. Her quest is interrupted when some guards come in expecting to referee a defenseless brat, only to encounter a fierce opponent whose combat training far surpasses their own. Yep, she kicks their derrieres, with startling, bone-crunching velocity. Oh, and one more thing: she doesn't hesitate to go for the kill.

So why is The Princess in this pickle? And why is she wearing a wedding dress? There is actually a reason for the virginal threads other than a nod to Uma Thurman in âKill Billâ movies. The Princess' pragmatic weakling of a dad, The (also nameless) King (Ed Stoppard) has agreed to marry her off to Julius (Dominic Cooper). The Princess, a free spirit who's been trained by chambermaid/life coach Ninh (martial arts star Veronica Ngo) when Daddy wasn't looking, is not having it, so she pulls a Julia Roberts at the altar. 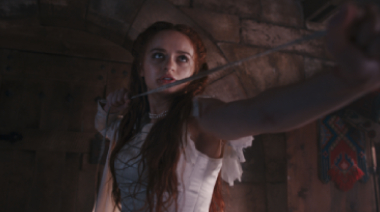 Joey King in a scene from "The Princess." (Photo courtesy of 20th Century Studios.)

Julius, naturally, is quite understanding of The Princess' reluctance in this betrothal. I'm just messing with you. He's a cold-blooded sociopath from Villainsville. His right-hand woman is Moira (Olga Kurylenko, picking up a paycheck with gusto), who's a menace with a whip, rocks heavy eyeliner and has more cunning than all of Julius' men put together. Like The Princess, she keeps being underestimated due to her gender, but in this celebration of girl power, it's the women who gets things done, on both sides of the rigid line separating good from evil. Cooper is totally channeling Karl Urban in the way he flexes his bad-guy muscles, but like the film he's in, he's content to chew the scenery as a live-action cartoon.

There was probably a more subversive film to be made here, one that would have embraced the intrinsic absurdity of its âGame of Thronesâ-meets-Jackie-Chan scenario. Still, you can't fault Kiet for wanting to treat the titular character's trial by fire seriously. He inserts oodles of cheeky humor and clever sight gags to make everything go down easy, and at 94 tight, mayhem-filled minutes, this 20th Century Studios release just zips by.

Kiet has crafted a violent yet strangely wholesome anomaly: a mindless but enjoyably junky East-meets-West hodgepodge that stokes our bloodlust while staying true to its storybook setting. Stupid? Without a doubt. Highly entertaining? Also yes. 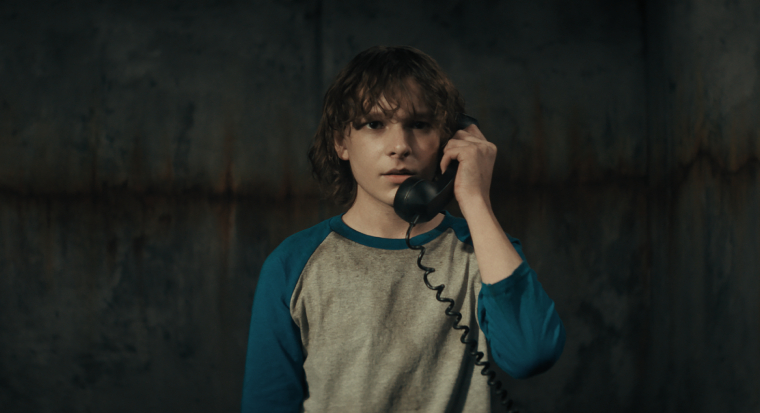 Mason Thames in a scene from "The Black Phone." (Photo courtesy of Universal Pictures.)

This dank and grimy number from âDoctor Strangeâ director Scott Derrickson turns a different archetype from children's stories into genre-driven fare for grown-ups. There's a bogeyman taking the kids of a Denver suburb circa 1978, only this isn't a mythical creature that jumped out of the pages of a horror novel. It's a serial child abductor from the pages of a horror short story. Derrickson brings the prose of Joe Hill, Stephen King's son, to the screen, and it's evident the poisoned apple doesn't fall far from the tree.

The sudden disappearances linger in the back of Finnie Blake's mind, since those taken are people he knows, but the boy is preoccupied by more pressing matters, such as finding ways to improve his baseball pitching skill, avoiding the punks who keep bullying him (at a time when bullying was accepted as part of growing up in many places) and dealing with the reality of living with an alcoholic father who becomes violent when he hits the bottle. 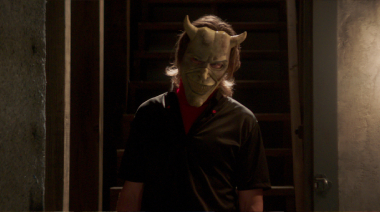 Ethan Hawke in a scene from "The Black Phone." (Photo courtesy of Universal Pictures.)

But Finnie (Mason Thames) doesn't have to climb this mountain alone. He's got his sister Gwen (Madeleine McGraw) in his corner. When the going gets tough, which is often, they have each other to fall back on, with the added bonus (and complication) that Gwen sees things in her dreams that may reflect things that happen in real life. That sibling bond, alas, is unable to prevent the girl from facing the wrath of her father Terrence (Jeremy Davies), and it doesn't prevent Finnie to be grabbed by The Grabber.

Finnie wakes up in a basement and comes face to face with his kidnapper. As played by Ethan Hawke, The Grabber wants to come across as a goofy weirdo in a magician's top hat and sneering horned devil mask, but who is he kidding? The creep factor seeps in pretty early on. The boy's attention shifts to the titular communication device mounted on the basement wall. He can see it's disconnected, and The Grabber abruptly interrupts his jolly psycho routine to point out it doesn't work, kid, abandon all hope, finito, curtains, end of story.

So, of course, the phone begins to ring. 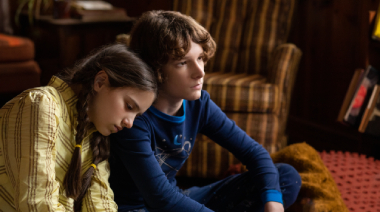 Madeleine McGraw and Mason Thames in a scene from "The Black Phone." (Photo courtesy of Universal Pictures.)

The film's trailers give you a good sense of the spooky twists and turns âThe Black Phoneâ takes, but I shall refrain from delving further. Suffice it to say that Hill clearly did a mashup of two of his father's most popular hits: âItâ and âMisery.â So I primed myself for a tense, unsettling ride.

Which, sadly, never came. âThe Black Phoneâ creates a sense of paranoia in keeping with its time and place. The performances are competent, the period details meticulous, but the film, a Blumhouse production, is undermined at every turn by the visual and aural shorthand associated with the production company behind the âInsidiousâ and âPurgeâ movies. The biggest culprit here is Mark Korven's intrusive music score, which fills the soundtrack with ominous chords. It's a cumbersome crutch that relies on the same clichÃ©s about what makes something scary. Derrickson wants the hairs on the back of your neck to stand up, but he's trying so hard that the Blumouse trappings end up having the opposite effect, a few well-timed jolts notwithstanding.

âThe Black Phoneâ desperately wants to come across as a supernatural âThe Silence of the Lambs,â even going as far as borrowing one of the 1991 film's narrative surprises. But it's too entrenched in the Blumhouse bubble to pull that off, something that extends to its portrayal of The Grabber. Reteaming with Derrickson after having made âSinisterâ back in 2012, Hawke is all masked up with nowhere to go. 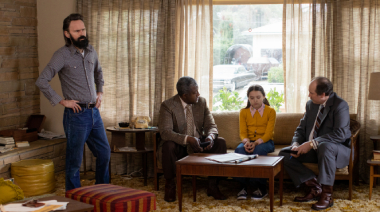 Derrickson and co-screenwriter C. Robert Cargill tiptoe around the antagonist's interest in these boys. And they are all boys. Is it sexual? The movie has no curiosity in exploring the character's pathology, and the apparent justification for this is a desire to keep him mysterious in the way that, say, Heath Ledger refused to give a definitive explanation for the source of his Joker's madness. But that excuse doesn't fly here. The way âThe Black Phoneâ hints at The Grabber's proclivities without providing an answer has the whiff of passive-aggressive homophobia to it, not a good look as Pride Month comes to a close.

Derrickson prioritizes jump-scares and sustaining a disquieting mood over the lives of these kids. He loses himself in the technique when the real nightmare is staring him right in the face. This horror doesn't need to be 'roided up. It doesn't require any bells or whistles to haunt your dreams. Why doesn't the filmmaker understand that less in this case could have been so much more? He turns what could have been a potent portrait of the monster next door into a grim obstacle course, reducing children in peril to marbles on a Stay Alive game board. Finnie, The Grabber and his other victims deserved better. So do you, so hang up this phone.