Performances Groovy, but Show is a Drag 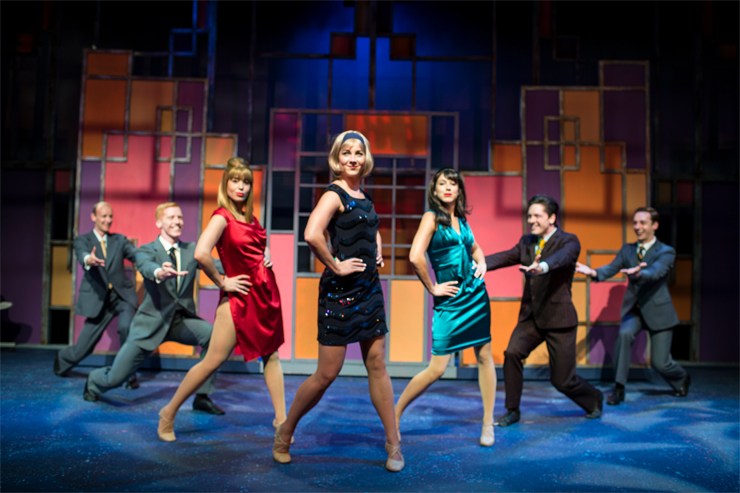 The promise of a pleasant time at the theater gets broken pretty quickly at Promises, Promises, now playing at Broward Stage Door Theater in Margate.

Promises, Promises is based on the 1960 film The Apartment, which starred Jack Lemmon and Shirley MacLaine. It won five Oscars, including Best Picture and Best Director Billy Wilder. The musical, with a book by Neil Simon and music and lyrics by Burt Bacharach and Hal David, premiered on Broadway in 1968 and won Tony Awards for leading man Jerry Orbach and supporting actress Marian Mercer.

The plot centers on Chuck Baxter (Elliot Peterson) an accountant for a large life insurance company. Chuck is a mild-mannered, everyman sort, but he is ambitious. He is also deeply smitten with Fran Kubelik (Jessica Sanford) a waitress in the company dining room. Chuckâs ambition leads him to loan out his apartment to the married company executives so they can tryst with their girl-of-the-moment. Chuck hopes this will lead to a promotion. But when Mr. Sheldrake (James A. Skiba) the powerful personnel manager gets in on the scheme, it leads to heartbreak for Chuck, because the girl Sheldrake is trysting with is Fran.

The Bacharach-David songs are well-known, and several became big hits for Dionne Warwick, including the title song and "Iâll Never Fall in Love Again." Â Two other hits, "A House is Not a Home" and "I Say a Little Prayer," were added to the 2010 revival starring Sean Hayes and Kristin Chenoweth, and are featured in the Broward Stage Door production.

Elliot has vocal power and an endearing quality that brings Chuck to life and makes him a hero to root for. Sanford has a sweet voice and sheâs a wonderful actress, imbuing Fran with a genuine vulnerability. One of the best moments in the show is their duet of "Iâll Never Fall in Love Again," because Chuck and Fran are, of course, falling in love as they sing it. 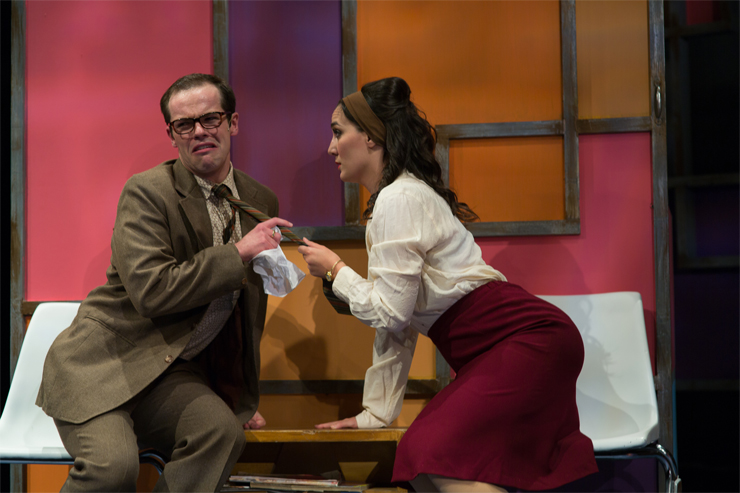 Another wonderful scene is at the top of the second act, when Chuck tries to drown his sorrows in a local bar. He meets Marge (Ashley Rubin) and after the two engage in some flirty, drunken banter, they engage in a hilarious drunken dance before going back to Chuckâs apartment.

So, thatâs the good stuff. The problem with Broward Stage Doorâs production of Promises, Promises is that this fluffy, tuneful musical is crushed by leaden pacing. The show clocks in at three hours. Itâs very top-heavy the first act feels like an eternity, though the second act fares much better.

The recorded tracks, a mainstay at Broward Stage Door, are sloppy and abrupt â it often sounds like someone is lifting the needle off the record and plopping it down someplace else. The choreography is energetic, incorporating mid-1960âs dance moves, and if the dancers actually did them in sync, they might have been a highlight. Instead, the dancing looks messy.

Despite some good performances and classic songs, Broward Stage Doorâs production of Promises, Promises lacks the fizz and sparkle it needs, and is as flat as a two-day-old open can of Coca-Cola. The result is three hours of mostly unfulfilled promises.