What's this? A âStar Warsâ movie with no opening scrawl? John Williams' stirring theme is also missing in action as âRogue One: A Star Wars Story,â the first in a series of standalone films set in a galaxy far, far away, hits the orbit running with an invigorating sense of purpose. 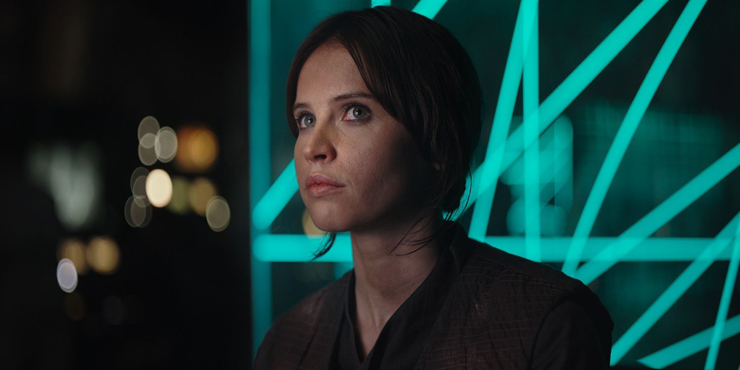 Director Gareth Edwards is keen on introducing us to worlds we haven't seen before, at least not outside the realm of âStar Warsâ novels, and I asked myself: "Is this film taking us into uncharted territory in the universe that George L. created? Could this possibly be the badass movie that, at long last, fulfills the potential of the very first trilogy by asserting its own identity?" 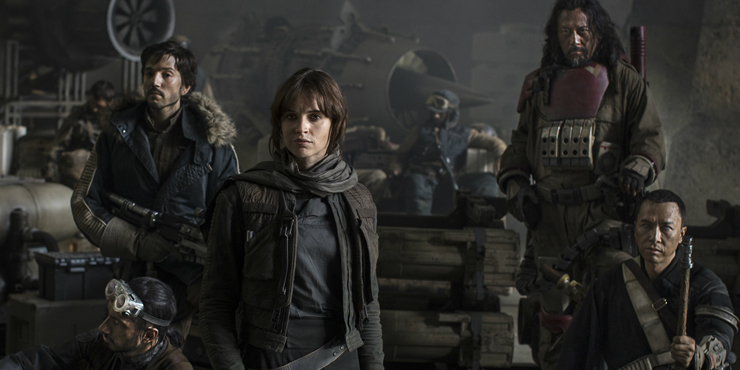 The crushing disappointment that ensues should come as no surprise, especially in light of reports that the film underwent extensive reshoots this past summer. But let's give credit where credit is due: For at least half of its (overlong) running time, it made me believe it was going to pull off the impossible. 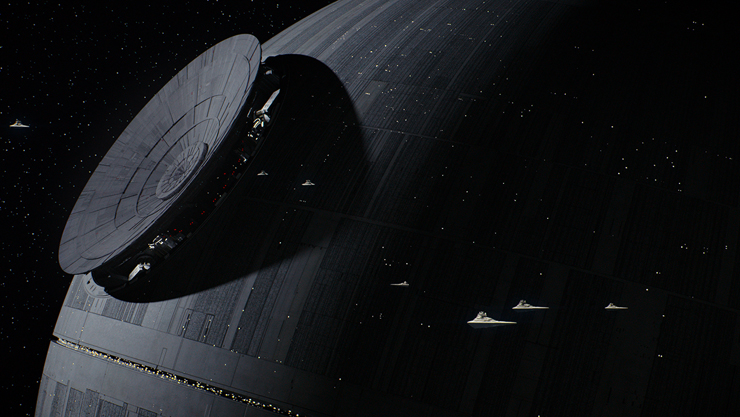 Not unlike the suicide mission at the film's core. âRogue Oneâ tells the story of the band of Rebels who agreed to go into enemy territory to steal the plans of the iconic Death Star. This is the selfless act of valor that sets in motion the events in âA New Hopeâ (a.k.a., the 1977 âStar Warsâ). 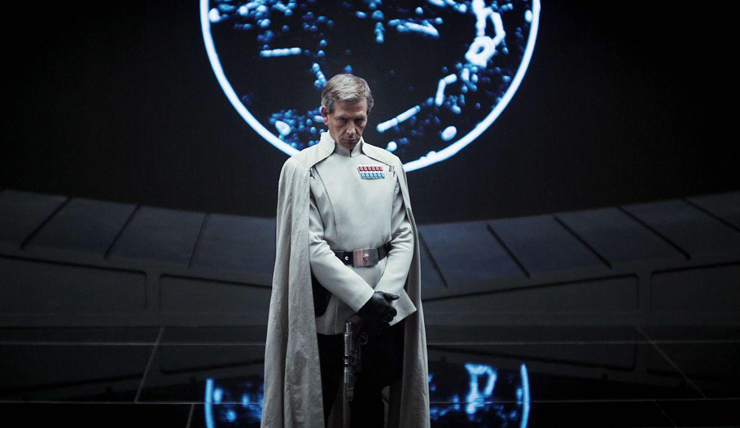 But I'm getting ahead of myself. The film begins with an abduction of sorts. Gifted scientist Galen Erso (perennial baddie Mads Mikkelsen, playing on the opposite team for a change) has hidden away from the Galactic Empire's nefarious clutches in a desolate planet with his wife and young daughter. But cunning Imperial weapons expert Orson Krennic (Ben Mendelsohn) is able to track him down. âYou're confusing peace with terror,â Erso tells Krennic, a statement that should resonate with quite a few viewers in the wake of the recent presidential election, but here it falls on deaf ears. Krennic nabs his hostage, but Jyn (Beau Gadsdon), Erso's spunky offspring, makes a run for it and is able to elude capture. 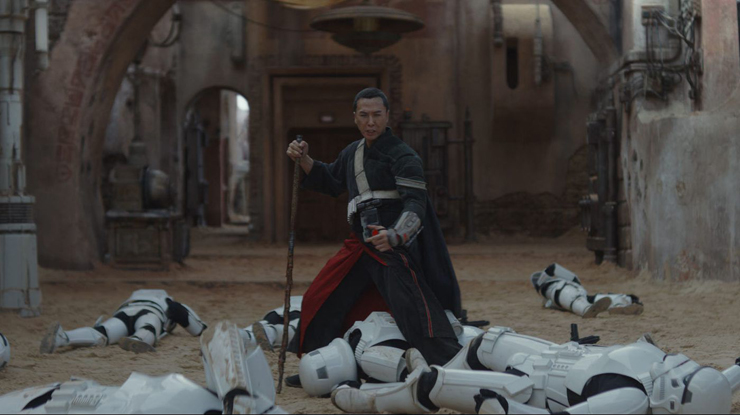 âRogue Oneâ then zooms into the future to find Jyn Erso, now a disaffected scoundrel, played by the lovely Felicity Jones, rotting away in a jail cell with a rather grotesque bunkmate. She is summoned by the Rebel Alliance, not for reprimand or condemnation, but an offer of freedom. If she is able to retrieve Rebel-warrior-turned-radical Saw Guerrera (Forest Whitaker), the very man who rescued her as a child, they will release her.

When the commanding Mon Mothma (Genevieve O'Reilly) conveys what's at stake, Jyn just shrugs. âI've never had the luxury of political opinions,â she says. Off she goes to locate Guerrera alongside shady Rebel spy Cassian Andor (Diego Luna) and K-2SO (a sassy Alan Tudyk), a reprogrammed Imperial droid that bears a striking resemblance to the robot in Hayao Miyazaki's âCastle in the Sky.â

Their journey leads them to Jedha, a moon whose arid terrain comes across as equal parts Africa and the Middle East, Morocco by way of Syria. The setting underlines the parallels between the Alliance's struggles and those happening right now on Planet Earth, and one of âRogue Oneâ's strengths is that it doesn't shy away from political intrigue.

Like, for instance, the power struggle taking place among the Imperial Military between Krennic and a certain figure that's a welcome blast from the past â¦ and no, I don't mean the one that breathes funny and skulks around in a cape, though in his case, the folks at Disney saw fit to let the cat out of the bag.

Back in Jedha, it becomes apparent that Andor's moral compass doesn't always point due north. It also becomes dispiritingly clear that Whitaker's role in this story barely surpasses plot device duties. But Edwards also introduces us to blind warrior-monk Chirrut Ãmwe (Donnie Yen) and freelance assassin Baze Malbus (Wen Jiang), who wouldn't look out of place in a Quentin Tarantino film, and their contrasting ways of kicking Imperial butt provide the shot in the arm this movie sorely needs. Bodhi Rook (the estimable Riz Ahmed), a fidgety Imperial pilot who's gone AWOL with some valuable intel, rounds out the top players in this motley crew.

And yet, as âRogue Oneâ lurches from one set piece to another, fatigue begins to set in. The film feels alternately choppy and poky, so it fails to build momentum as the characters get closer and closer to executing their titular operation. (You feel every one of these 133 minutes.) It doesn't help matters that Edwards, working from a screenplay by Chris Weitz and Tony Gilroy, gives Jones and Luna morale-boosting speeches that sound less like remarks their characters would utter and a lot more like corny platitudes inserted mainly to rally the base, and by the base, I mean fanboys who think every new âStar Warsâ movie is the best âStar Warsâ movie yet and begin to drool the second they hear Darth Vader's labored breathing. Their rah-rah battle cries boil down to, âAnything is possible if you believe,â which might work for, say, a theme park attraction, but they have no place being in a film from The House That Luke Built. 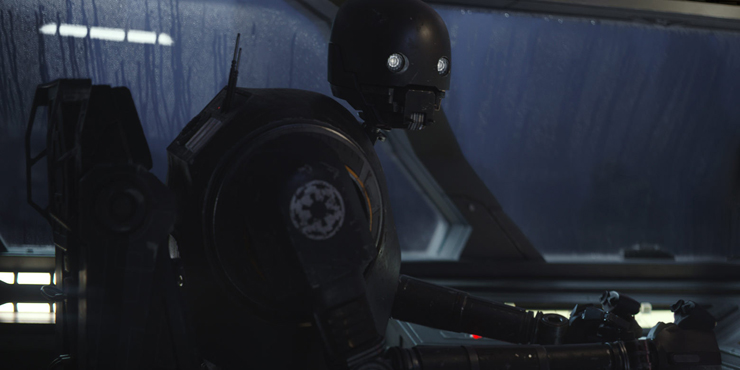 Similarly, the filmmakers have no intention of tackling the murky ethical dilemmas that the characters confront. For instance, it repeatedly places Andor in situations where he must make difficult life-and-death decisions, but at just every point, the movie swoops in and makes that choice for him. Even worse, âRogueâ follows up these cop-outs with a scene in which the caliber of Andor's judgment is called into question. It's lip service of the most bald-faced and egregious kind, and effectively sweeps under the rug any hint of ambiguity the film might have fleshed out, while at the same time allowing the filmmakers to pat themselves the back for purportedly making an âedgierâ âStar Warsâ entry. It isn't.

Darker than âThe Empire Strikes Back,â you may have read online? Don't make me laugh. Jyn and Cassian's cut-and-dried crises are a far cry from the tough upheavals the older film's characters had to face. âEmpireâ truly embraced its apocalyptic scenario. The body count may be higher in âRogue One,â but the bloodless nature of the violence prevents the loss of life to register emotionally. Jones and Luna try to make an impression, but to Edwards, they're stick figures on a storyboard occasionally required to act like the born leaders he desperately wants you to believe they are. In reality, the characters' transformation from me-first survivors to courageous heroes is abrupt and unconvincing.

There is zero depth here. You keep hoping for a transgressive moment that will make the cringe-inducing dialogue and gratuitous fan service worthwhile, but it never comes. What we get instead are cluttered, poorly edited combat sequences and hollow epiphanies. They amount to little more than jigsaw puzzle pieces that all too neatly link the events of this film to the beginning of the original trilogy. It may boast an eclectic multicultural cast and some noble intentions to expand this beloved universe, but âRogue Oneâ is as generic a franchise installment as they come. It is less a tale of bravery honored than of creativity stifled. In our imaginations, it never quite makes the jump into hyperspace.