In Pioneer Winterâs most recent production of âReprise,â the Miami Dade County Auditorium On Stage Black Box Theater was transformed. The stage, where the audience now sat, was transformed into a theater in the round. A bare wall in the back revealed just a glimpse of the vast auditorium that sat beyond a partially raised curtain. The space was intimate, yet large.

One never really knows what to expect when entering a Winter âexperience.â His theatrical dance, physical art, and ultimately, human performances are not for the faint of heart who like everything pretty and predictable. His performers are raw and real, his questions are honest and thought provoking and he purposefully walks a fine line between being acceptable and over the edge.

Having seen âRepriseâ in its work-in-progress phase as part of the soMI DANCEFEST in January, the evolution of this performance was a clear example of the methodicalness and openness of Winterâs exploratory and trust-building rehearsal process. Each individual bared their soul in a most honest and confident manner, even in the most revealing of circumstances. Nothing could be done âa little.â It was all or nothing as the artists fearlessly led the audience on a journey of identity, relationships, vulnerability and conflict.

Entering the space, members of the cast were seated throughout the theater. They were one of us. After a brief intro by Winter board member, Jairo Ontiveros, urging the audience to support the arts in a difficult financial environment, a short film expounded upon the numerous activities that Winter is involved in, all of which inform the work he creates and the boundaries he treads.

June Romero began a wild disco dance, including roving lights and strobes, a dance of the 80âs with flying hair, gyrating pelvis, a swaggering and sometimes, staggering explosion of energy that ended in a tumultuous collapse to the floor. Artists entered the arena with little clothing on, vulnerable and exposed.

The larger than life voice of wheelchair bound Hector Machado gave commands to impact the flamenco rhythms of Niurca MÃ¡rquez. She didnât always follow his lead and he got louder and louder. Machado continued giving commands as the group followed suit. They repeated and repeated their sequence. Katrina Weaver was breathlessly held by Frank Campisano in a backward tilt over and over while Machado screamed âRemind, Regroup, Reset, Remind, Remind, Remindâ¦..â He seemed to be saying, âHow many times must it be said and how loudly to get a reaction?â 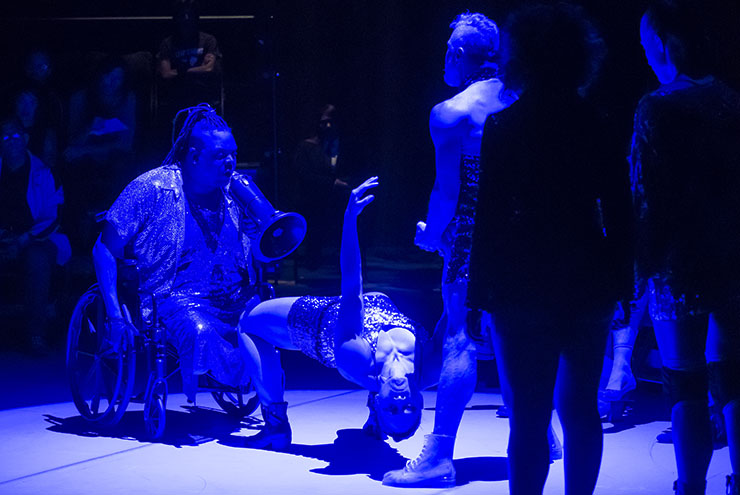 It says in the program,â Reprise comes from the French word repris, meaning "take back." By repeating, doing over and over again, we get closer to something better than we had before. We would not repeat were it not for the possibility of a different, changed future. So ultimately, Reprise has to do with hope.â

The most resonating parts of the performance were the spoken words, the stories that were clearly and honestly told. Machado began with his story about what it feels like to be a black man, gay and now, in a wheelchair. It canât have been an easy story to tell. He and Winter began a marvelous duet that eventually included everyone. Winter seems to create, not purposefully, but out of necessity.

Lize- Lotte Pitlo revealed herself in a solo that ended in flight with support from all of the other cast members especially, by Machado. It was a memorable moment recalled from the earlier workshop about humanity and oneness.

Enter the huge disco ball, graciously on loan from the Arsht Center. The space became a sea of lights ( awesome lighting by Gary Lund) as Campisano pushed the envelope in an abusive relationship with Romero. How far must one go? It was uncomfortable and harsh until Romero finally fought back. Transgender Romero took the mic and began the story of growing up and encountering the many, many challenges of finding her identity. Again, the exposed words, the humanness and vulnerability resonated.

The disco ball got lower and lower as each person supported it like Atlas holding the weight of the world. This group knew who they were and what they were about. They were trusting and fearless. There was that fine line of going too far, being too personal, creating such a close and trusting group that it became more about each other than it was about creating live performance for an audience. These thoughts are what made Winterâs âRepriseâ interesting, conscious and thoughtful. The performance evoked an intimacy and personal exposure that could not have been there otherwise.