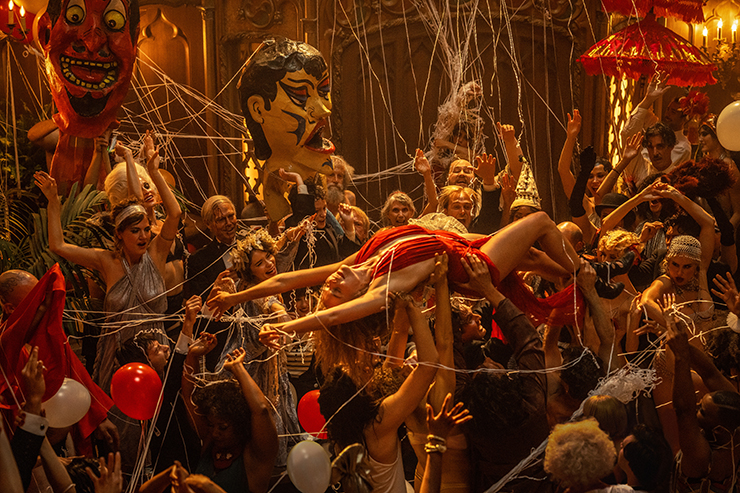 Margot Robbie in a scene from "Babylon." (Photo by Scotty Garfield/Paramount Pictures)

An elephant with the runs sprays some unfortunate saps near the beginning of âBabylon,â writer-director Damien Chazelle's deeply unpleasant Tinseltown period epic. The shower of poo with the texture of Quaker Oats rains down with you-are-there immediacy, beginning with a point-of-view shot, so viewers get the full effect. (Be happy theaters aren't handing out scratch-and-sniff cards.)

Is it a momentary scatological flourish?

Not on your life. This is merely the opening salvo in Chazelle's three-hour-plus opus, filled to the brim with overwrought bacchanalia and overly deterministic showbiz tropes. It ultimately unravels, undermined at every turn by shrill excess and a plethora of poor creative decisions.

That this festering piece of awards-season roadkill is anchored by three strong central performances adds insult to injury. The protagonist and audience surrogate here is neither Margot Robbie, who plays an aspiring starlet with the chops and moxie to get ahead nor Brad Pitt, who turns up the swagger as an aging leading man with self-destructive tendencies and a disastrous private life. Rather, it's Mexican actor Diego Calva, seen by festival audiences as far back as 2015's queer coming-of-age drama âI Promise You Anarchy,â who gives it the old college try as a resilient immigrant who gets swept up in the moving pictures madness just before the industry's abrupt transition to sound.

âBabylonâ does its damnedest to live up to its title in its first setpiece, an extended foray into rampant debauchery, as Chazelle, again working with his âLa La Landâ cinematographer Linus Sandgren, Steadicams his way through a chaotic after-hours party at the sprawling home of (the fictional) Kinoscope Studios executive Don Wallach (Jeff Garlin, who bears an off-putting resemblance to Harvey Weinstein here). It's not enough for Chazelle to gape at the fornicating bodies and illegal substance intake with transfixed fascination. Oh, no. He yanks our hair and pulls us uncomfortably close to the mayhem. Cue the elephant and more unbridled destruction.

Diego Calva and Brad Pitt in a scene from "Babylon." (Photo by Scotty Garfield/Paramount Pictures)

At the eye of the storm is Nellie LaRoy (Robbie), as she lies on the dance floor and writhes in ecstasy, wearing a red dress that leaves little to the imagination but that nevertheless fits like a glove with production designer Florencia Martin's loud color scheme. As luck, or Chazelle's mile-a-second writer's brain, would have it, a starlet set to report on set the next morning is carted away after she overdoses, so Nellie does not hesitate when opportunity comes her way on a silver platter. At about the same time, debonair train wreck Jack Conrad (Pitt) is entrusted to Manuel Torres (Calva), who was hired to work the party, to get him home safely. The iconic star with John Gilbert's magnetism and Douglas Fairbanks Sr.'s sex appeal takes Manuel under his wing hours after Nellie gets her big break. From there we're off to the races.

There is plenty of skillful staging throughout âBabylon,â as Chazelle's juggles myriad narrative strands and characters encompassing the studio system's totem pole. Manuel, Jack and Nellie rub elbows with a mix of real Hollywood players (Max Minghella, for instance, makes a convincing Irving Thalberg) and others inspired by real people (Jean Smart is shrewdly cast as Elinor St. John, a gossip columnist clearly inspired by Louella Parsons and Adela Rogers St. John, but Chazelle doesn't give her nearly enough to do.)

But what ought to be exhilarating soon becomes an endurance test. The frantic pace rarely lets up, so you can't call this overstuffed aberration boring. It's not quite accurate to call it messy or unfocused, since it's apparent Chazelle has got a grip on the way the narrative unfolds. Too much, as it turns out. The characters' fortunes rise and fall, with the abandon of the Roaring Twenties and early 1930s masking the calculating nature of the âWhiplashâ director's cautionary tales.

Also trapped in the debris of this madcap fizzle is Sidney Palmer (Jovan Adepo), a Black trumpet player (yep, he of the phallic horn) who gets a leg up when Manuel, now with more clout and his name tweaked to the Anglicized âManny,â moves him from invisibility to in front of the camera. A scene dealing with Sidney and blackface tries to depict the indignities African Americans were subjected to by the studio system, but it nevertheless leaves a bad taste because it comes from a filmmaker accused of whitesplaining jazz. (There's a jazz analysis moment, but at least Chazelle has the exchange happen between Black musicians.)

Faring slightly better is Lady Fay Zhu (Li Jun Li), a stage performer who moonlights as a silent film title card writer (or is it the other way around?). Tailored after the legendary Anna May Wong, Fay does not disguise that she likes women. In what is the only tolerable part of Wallach's coke-fueled soirÃ©e, she performs a number in a man's suit and top hat, modeled after Marlene Dietrich's eyebrow-raising nightclub routine in âMorocco.â The homage is early by a few years, since âMoroccoâ (1930) is an early talkie, but Li seizes the moment and sells it. Her song's name, alas, is unprintable here.

Showbiz, sex, drugs and behind-the-scenes wheeling and dealing. It doesn't take an expert to tell the mold Chazelle is following here. He's making his own âBoogie Nights,â which, as âBabylonâ careens from one labored, overproduced setpiece to the next, it increasingly resembles. The movie hits rock bottom when Manny has a tense visit with gangster James McKay (a gaunt Tobey Maguire) that segues into a tour of a seedy underground space with the pleasant vibes of a run-down S&M dungeon. (Don't ask what they do to rats down there.) The sequence plays out like the scene in âBoogie Nightsâ where Mark Wahlberg's Dirk Diggler pays a visit to a drug kingpin played by Alfred Molina. The difference is that Paul Thomas Anderson pulled off the sudden tonal shifts, albeit in an occasionally heavy-handed manner. When Chazelle tries to do it, he just switches from one loud garish gear into another that's just as loud and garish, and equally repellent. That's right: âBabylonâ glides from raucous bad, to bloodthirsty bad, to Movies Matter bad.

Chazelle's astonishing lack of insight extends to his treatment of Nellie, depicted as a rule-bending maverick before Chazelle brings the hammer down hard on her character. It's not enough for Nellie to bite the hand that feeds her. In customary fashion, Chazelle has her literally regurgitate her contempt in a way that Rob Reiner depicted much more effectively in âStand by Me.â (One word: Lardass.) Because Nellie is mostly seen from Manny's perspective, first as the object of his unrequited affection and then as a studio liability, the character has her agency wrested away, until all we're left with is a damsel in distress on a one-note, barely developed downward spiral. Considering how completely Robbie throws herself into the role, this is probably the most obscene part of an obscenely terrible movie.

And, as a final slap in the face, Chazelle chooses to end his bodily fluid-drenched folly with a montage that celebrates what movies are capable of. It comes across as the handiwork of a film school student who wants his teachers to know that he knows his stuff, but let's set aside the sequence's incompetence for a second and focus on its placement in the movie. The filmmaker who crafted a musical that twisted himself into a pretzel to come across as effortless here spends three hours showing you how much a cesspool Hollywood was/is, then closes with a hooray-for-Hollywood tribute of sorts, implying that the disintegration of a person's integrity and the way this industry chews up and spits out talented people are all worth it in the end. Because the films will live on forever. Or something.

Maybe the Golden Globe peeps (and more than a few Oscar voters) will lap up this swill, but after stumbling out of the theater, the word that came to my mind was âyucky.â (Also, âmake it stoooop.â) âBabylonâ is ugly inside and out, a blistering scab that shows us who Damien Chazelle is; the size of his ambition is diametrically opposed to how much he's grown. He's gotten high on his own fumes, and in the process has made, not only the worst film of 2022, but the most deplorable studio film I've seen in at least a decade. The feeling that you're covered in pachyderm doo-doo never really goes away.

âBabylonâ is now playing across South Florida including Regal South Beach, Silverspot Cinema in downtown Miami, AMC Aventura and IPIC Theaters on North Miami Beach. A Premium Video On Demand release is expected soon. It is also expected to stream on Paramount Plus.