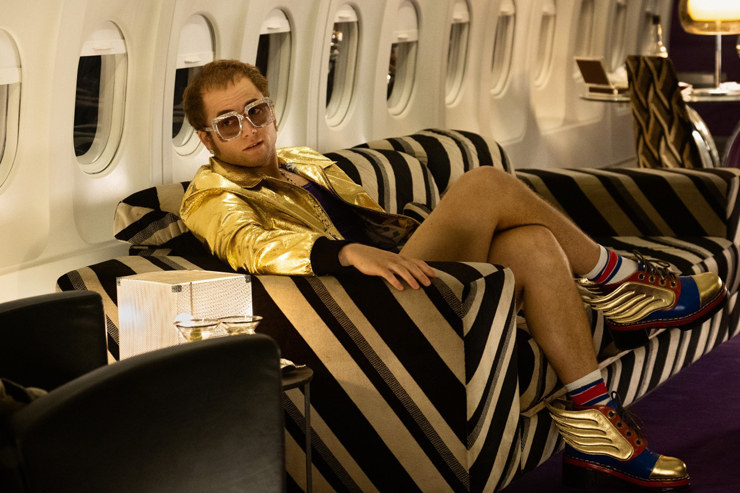 To answer your question, yes: âRocketmanâ is better than âBohemian Rhapsody.â This polished, thoroughly authorized look at Elton John's rise to stardom is, in several key ways, the movie that the tepid (and, God help us, Oscar-winning) Queen biopic should have been, despite thematic and aesthetic similarities. It is alternately driven by the vivacity of a backlot musical and the sobering introspection of a substance abuse chronicle. When it cooks, which is the case more often than not, it sweeps you off the ground with its starry-eyed theatricality and disarming showmanship.

There is a âbutâ coming up, but first let's highlight what this pleasantly old-fashioned showbiz yarn gets right. It is able to get inside its protagonist's head in a way that digs a little deeper than your basic studio-financed behind-the-music biopic. Director Dexter Fletcher appears to recognize that he lacks his subject's larger penchant for rococo excess, so he opts for a more square approach to the larger-than-life piano man with the musical chops, the mercurial temper and the voracious appetites for alcohol, cocaine and men (not necessarily in that order). 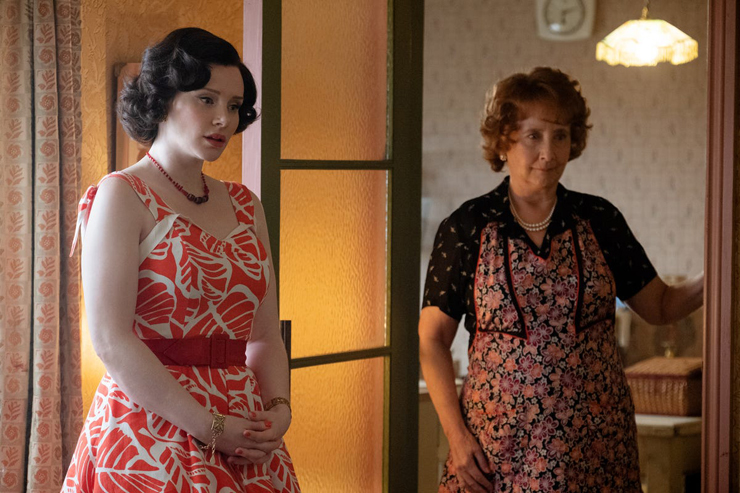 Working from an inquisitive screenplay by Lee Hall (âBilly Elliot,â the upcoming screen adaptation of Andrew Lloyd Webber's âCatsâ), Fletcher, the very filmmaker who stepped in to finish shooting âBohemianâ when director Bryan Singer reportedly went AWOL, uses a rather creaky framing device of a substance abuse support group that turns into a therapy session for the embattled British pop rock icon, played by âKingsman'sâ Taron Egerton with a mix of bravado and self-doubt. The cheese factor runs fairly high throughout âRocketman,â but its focus on Elton's identities (not John's, since this is very much a first-name-basis portrait) makes for intimate soap opera.

Elton Hercules John was born Reginald Kenneth Dwight to Sheila (Bryce Dallas Howard), an emotionally abusive mum, and Stanley (Steven Mackintosh), a distant, frequently absent dad. Ivy (Gemma Jones), his more supportive maternal grandmother, immediately takes notice of his virtuosic gift for song and encourages him, even when he's not sure of the extent of his ability. We've all heard this tune before, but there's something genuine and heartfelt about the way Fletcher and Hall follow Reginald's journey out of his shell. 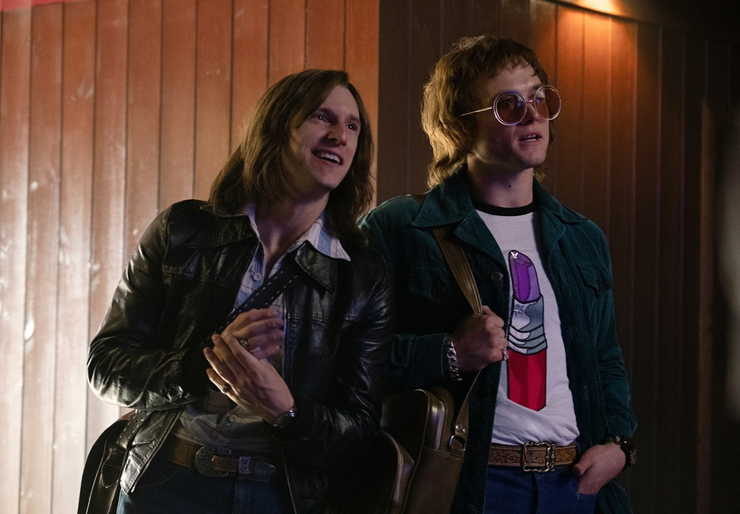 The filmmakers wisely opt to make Elton's relationship with longtime friend and creative partner Bernie Taupin (played by Billy Elliot himself, Jamie Bell) the film's emotional anchor. The actors nail the fierce bond that can form between gay and straight men. An intellectual affinity gives way to something more close-knit and cherished between the budding musicians, and it nourishes what could have been a more superficial rags-to-riches narrative.

But Fletcher also understands that surfaces matter in a movie like âRocketman,â so like the unabashedly old-school musical that it is, his characters are prone to break out into song. And during its frequently exuberant first hour, the movie brings on the song-and-dance razzmatazz. There's nothing earth-shaking about the competent staging. Actually, the group choreography could have been shot with more flair. And yet, there's a wide-eyed appeal to this winning concoction that unmistakably has Broadway and MGM in its DNA. 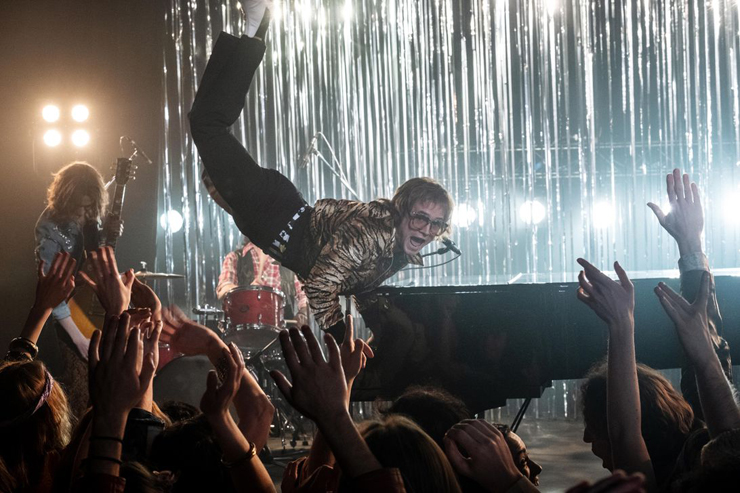 As Elton and Bernie land a record contract and cross the pond to Los Angeles, âRocketmanâ captures the intoxicating high of success, that engulfing elan that comes when creative flowering goes hand in hand with career achievement. Enter John Reid (cutie patootie Richard Madden), the man who becomes Elton's manager and the first man to show him the ways of the flesh. Let's not get carried away about the much publicized sex scene between Egerton and Madden.

It's certainly an improvement over the shame-fueled depiction of Freddie Mercury's hedonism in âBohemian Rhapsody,â but it's also awfully truncated. Seeing Egerton and Madden making out and briefly copulating is about as wholesome as it sounds, at least until the discreet camera pan away. Beggars can't be choosers in a current mainstream movie landscape where frank depictions of sex (of any kind) are few and far between. Still, this is far from where we ought to be. 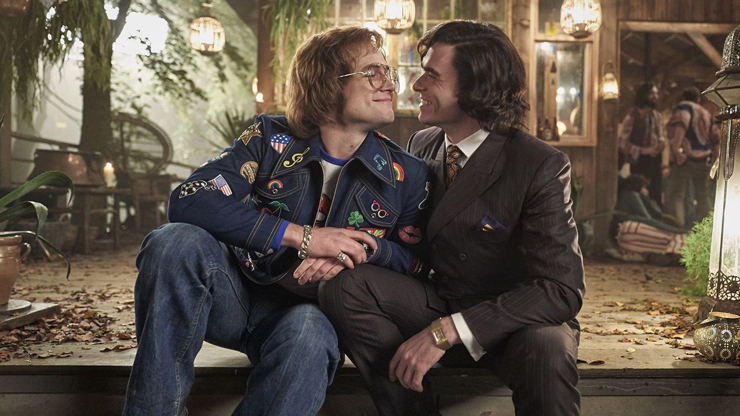 And just when you think âRocketman,â with its dorky weaving in of Elton's most popular songs Ã  la âMamma Mia,â will remain a buoyant delight, it goes all in on the singer-songwriter's alcohol and drug abuse. While Fletcher's decision not to shy away from Elton's personal struggles is admirable and in keeping with the film's unvarnished blend of fantasy and reality, it siphons off its energy along with its narrative momentum. Fletcher hasn't found a way to depict the artist's addiction in a way that brings something new to the table, so as a result, it brings the movie down. It never becomes a drag, exactly (not even when Elton dons actual drag during a concert performance), but it turns a heretofore mighty special film into something more ordinary. 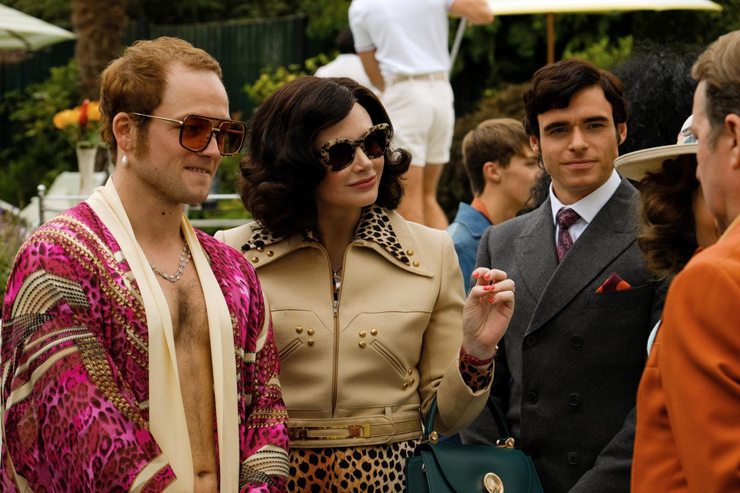 And yet, like that high-maintenance friend with unpredictable mood swings but who always has your back, it's pretty hard to stay mad at âRocketmanâ for sputtering when it should have stayed in the stratosphere. Fortunately for Fletcher, Egerton is more than up to the herculean task of stepping into Elton's platform shoes. Nuanced and broad when the role requires it, the young actor, who does all his own singing, thank you very much, etches a portrait that rides the movie's wave when it enthralls but also transcends the film's shortcomings, particularly when it becomes more of a wet blanket. He keeps reminding you that, despite its considerable number of ill-advised decisions, âRocketmanâ is a big-hearted valentine that invites viewers to follow their passion. Corny, to be sure, but as summer entertainment goes, there's no denying it hits the sweet spot. 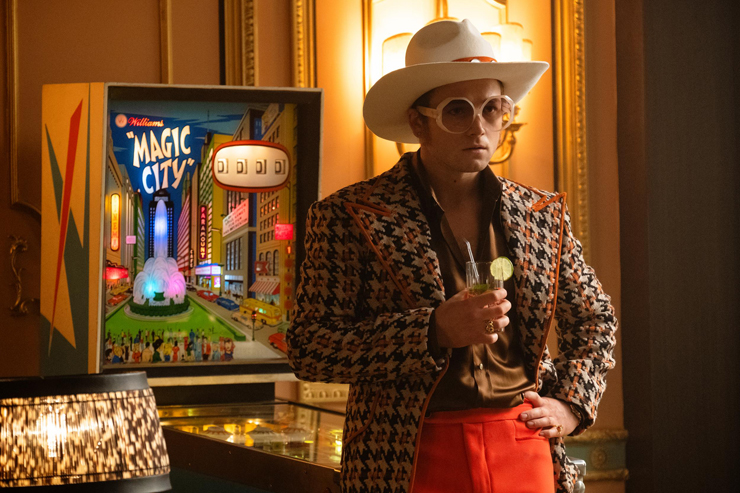 âRocketmanâ is now out (and proud) in theaters across South Florida in wide release, including the Dolby Cinema at AMC Aventura, the Silversport Cinema in downtown Miami, Regal Cinemas South Beach, CMX CinÃ©bistro CityPlace Doral, the Landmark at Merrick Park in Coral Gables and the Classic Gateway Theatre in Fort Lauderdale.

The Abstract World Of Ritchard Rodriguez

ARTIST SPOTLIGHT: The gestural abstract oil painter, formerly based in New York City, has made Brickell his home and Allapattah his studio. Michelle F. Solomon has the interview.

ARTS AT LARGE: Find out about the Adrienne Arst Center for the Performing Arts' commissions for artists.