It may lie just on the other side of the border, but Mexico's terrain, at least as seen through the eyes of director Denis Villeneuve in the gripping war-on-drugs odyssey Sicario, sure looks like an alien landscape.

Strange and forbidding, this purgatory is capable of ensnaring the pious and the damned alike.Â There are no heroes in this somber tale of an FBI agent asked to join a task force to track down a drug lord responsible for the deaths of hundreds of people. In fact, the story doesn't kick into gear in Mexico, but in Chandler, Ariz., where FBI SWAT Agent Kate Mercer (a steely Emily Blunt) and her team surround a home where they believe the people they've come to rescue are located.

A violent shootout ensues, and it's not after the situation (literally) blows up in their faces that they realize they've unearthed a lot more than they bargained for. This house, they realize, is a tomb, and the sight of bodies wrapped in plastic jutting out from behind walls is the first of several indelible images by cinematographer Roger Deakins, who pulls off some career-topping work here.

âDo you wanna catch the bad guy?â flip-flop wearing official Matt Graver (Josh Brolin) asks Mercer, and even though she considers herself ill-suited to take on this particular mission, the undertaking speaks to a deeply ingrained sense of right and wrong in the idealistic law enforcer, one that the film then proceeds to obliterate in ways that are alternately conventional and subversive, at least for a studio release with an A-list cast like this one.Â

Mercer's partner Reggie (Daniel Kaluuya), asked to sit this one out, senses Graver, whose organizational affiliation is unclear, is not being forthcoming about the real nature of this operation. Mercer shares his trepidation, but she's too enticed by the prospect of being present when kingpin Fausto Alarcon (Julio Cedillo), the head of a widely feared Sonoran cartel, is finally brought to justice to say no. Along for the ride is too-cool-for-school man of mystery Alejandro (Benicio Del Toro, decidedly not reprising his Traffic role). 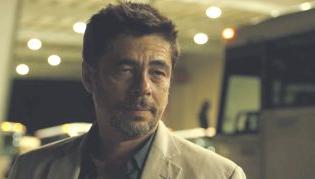 He wears dark sunglasses, a beige coat and a perpetual scowl. He doesn't say much, other than mumble about being from Cartagena, but you can tell he knows stuff. It's clear Villeneuve and Deakins are transfixed by this walking enigma, but they keep their distance from this shadowy figure, fixating instead on Mercer, aka Ms. Audience Surrogate.

Deakins' close-ups of Blunt, her wide-eyed gaze registering her character's bewilderment as to the atrocities she's witnessing, are a thing of beauty. A good thing, because Sicario is full of these killer shots.Â It's also filled with expansive vistas of Mexico. Sunbaked aerial mountain shots suggest a sleeping giant about to awaken, and this reviewer immediately thought of the curvy desert dunes at the beginning of The English Patient.

Much more grim are the country's mean streets, governed by a cartel that sees fit to dangle naked bodies from a bridge just as a reminder of what happens to snitches under their watch. It's territory we've visited before, but thanks in part to screenwriter Taylor Sheridan's economy of storytelling, it's rarely been explored with such pessimistic cohesion. Â Which is not to say Sicario is a humorless slog. Villeneuve knows how to craft a tense bloodbath â it's hard not to think about the fiery bus sequence in Incendies without wincing â and this time he unleashes a coup de grÃ¢ce near the U.S.-Mexico border, as a caravan of dark SUVs filled with trigger-happy law enforcers cruises next to the drug traffickers they're looking for â¦ in the middle of a massive traffic jam. Joe Walker's judicious editing unobtrusively turns the screws on the audience, and the ensuing burst of gunfire, explosive yet surprisingly brief, unfolds with you-are-there immediacy.Â 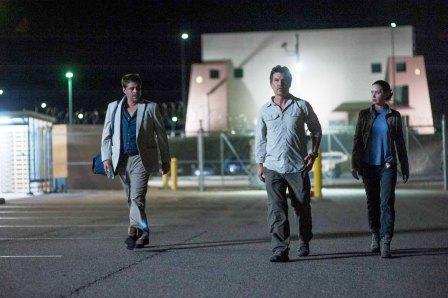 One wishes the rest of Sicario matched that stunner of a sequence. Much of it bristles with assured craftsmanship and a commendable refusal to look away from the abyss. And yet, mysteries need to be solved, and the more the film reveals about Mercer's motives and, in particular, Alejandro's ultimate agenda, the more mundane it becomes. There is also a recurring narrative thread depicting the family of a Sonoran police officer that aims to put a human face on the toll the drug war takes. But that storyline never really pays off. In fact, once the gun smoke clears, it's evident Villeneuve and his team were focusing on the wrong household in order to achieve the catharsis they were diligently going for.Â

Some peers regard Mercer as a weak and ineffective protagonist, but Blunt's performance is actually the glue that holds Sicariotogether, even when its narrative, which had succeeded at sidestepping clichÃ©s, eventually indulges in that shopworn vengeance-is-mine chestnut to diminishing returns. It's a tip of the hat to numerous B-minus thrillers about sinister Mexican hit men. You know, the ones Robert Rodriguez poked fun at in his Machetemovies.

But give credit to Sicario for its loftier ambitions, its insistence in arguing that the war on drugs is a no-man's-land fought between factions that can no longer claim the moral high ground â¦ and that includes those in uniform. I liked this bleak worldview better when Tommy Lee Jones' disillusioned sheriff threw in the towel at the end of No Country for Old Men, but Villeneuve has nevertheless crafted a worthy companion piece.