Theater Plays It Big For Move To Lauderhill 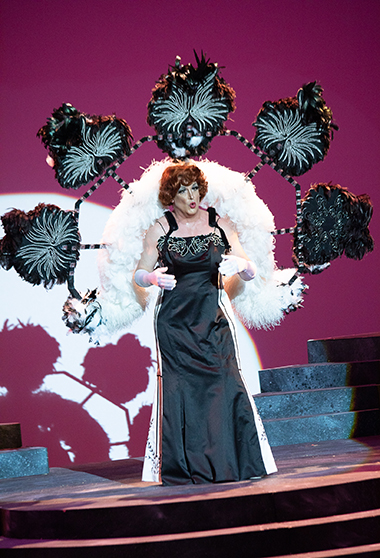 The Stage Door Theatre left its venerable home in Margate in a two theater, former cinema that had become a comfy, intimate space to see show. You could go see a musical in one theater, while another smaller play was in the next.

When that theater was no longer an option to them, founder and executive producer Dee Bunn thought perhaps Margate would continue on its plans to build a performing arts center, but that wasn't happening soon enough.

The Broward Stage Door Theatre has now found at home at the brand new Lauderhill Performing Arts Center, and the folks who used to enjoy shows at the Margate space will find that the new digs are, while not as intimate, give opportunity for a much more professional atmosphere.

The company needed to do it up big for its grand opening, and they've hit their mark with"La Cage Aux Folles," filled with bawdy comedy, over the top costumes, and a cast that plays the campy side of the musical to a rich crescendo.

"La Cage" takes place in the 1970s and gay people were in the closet and drag queens were a novelty. Perhaps that is why the show seems a bit dated today. And, may we say thankfully so, since there is more of an acceptance in 2018 than the setting of "La Cage." Yet, the nostalgia brings a whole new light to the musical, written by Harvey Feirstein, with music and lyrics by the incomparable Jerry Herman, and based on a French play.

Â Georges and Albin have been partners for twenty years. They aren't married (gay marriage was unheard of in these days). The pair run a drag nightclub in St. Tropez, where Albin is the star of the show. His alter ego, ZaZa, a diva both on stage and off. A long ago one night stand with a woman resulted in Georges fathering a son Jean-Michel. He's arrived home with big news. He's getting married, but his fiance is the daughter of a bigoted politician who is trying to shut down the club and put homosexuals behind bars. 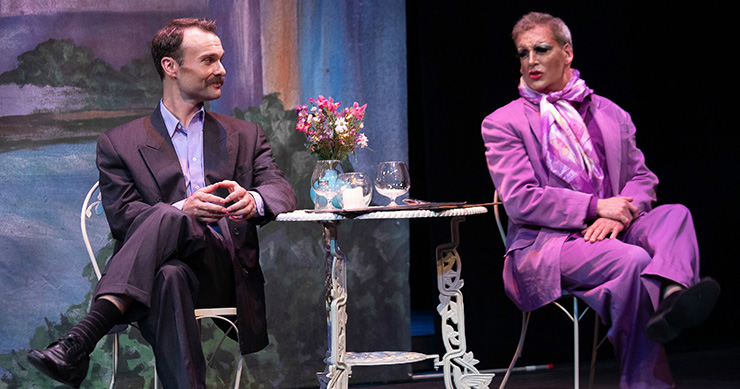 Stage Door's production, directed with flair by Bruce Linser, is both sassy and sweeping. By that I mean that there isn't a minute that goes by in the 2 hour and 30 minute show that lags. Linser keeps things moving at a clip.Â

The casting is perfect to a T with Jamie Michael Parnell, a New York actor, brought in for this production, to play Georges. He's the perfect yin to Larry Buzzeo's Albin/ZaZa yang. The role of Georges has always been a bit of a support for the real star character, Albin, but here Parnell gives his Georges a dose of his own dashingness. Parnell's incredible voice in Act One's "Song On The Sand" and Act Two's "Look Over There," along with some incredible chops gives Georges rich depth. 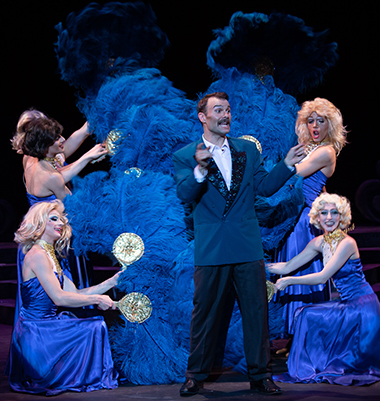 Buzzeo, always the reliable, give-it-the-all, South Florida veteran, finds his dream role in ZaZa, and, as Albin, Buzzeo infuses a heart on his sleeve genuineness that makes you want to rescue him. When he sings "I Am What I Am," it's remains, as it always has been, an anthem for anyone in the audience that has felt different,Â  but this time, it's also coming from the soul of Albin. "Damn all you haters" is the read between the lines here, and it's brings to light truths of this story that, while rooted in nostalgia, remain relevant today. Buzzeo's transformation on stage from Albin to ZaZa in "A Little More Mascara" is sheer beauty.

Elijah Word steals every scene as the over-the-top maid Jacob. Connor Delves is earnest as son Jean-Michel and Alexandra Van Hasselt is his betrothed. Both have little to work with in these cardboard cut out roles, but they make the best of them. It is necessary, I suppose, for the French accent for domineering restaurant owner Jacqueline, but Kat Gold's dialect is difficult to understand. But Gold's Jacqueline is a hoot nonetheless. Seth Trucks as the hapless stage manager Francis is good for many laughs.

James A. Skiba, who was engaging as ever in Stage Door's "Victor Victoria" is teamed up once again with his VV co-star Dalia Aleman as Mr. and Mrs. Dindon. The two, in roles that are as deep as a puddle, create them as larger than life personalities.

A bevy of drag queen beauties are required to take on some serious choreography (some of it works better than others), while also having to maneuver tons of costume changes. They are the hardest working "girls" on a stage (two of the drag queens are women, but, like the song says, who they are is an illusion). The Les Cagelles girls are Cat Pagano, Jonathan Eisele, Dyllan Vallier, Stephen Hohendorf, Johanna Moise, Korey Harlow. Others in the cast include J.R. Coley, Rebeca Diaz, Kevin Lozano, Sean Davis, Nicole Kinzel, and Courtney Poston.Â  Â

And one of the best things about Stage Door's "La Cage Aux Folles?" Live music, performed by a top-notch seven piece ensemble, which brings this production up from Stage Door's sometimes recorded tracks. It makes a world of difference.Â

Technical issues with the microphone sound was a bit of a distraction on opening night, but hopefully they'll get those bugs worked out.

Stage Door has found a new home in Lauderhill. It's worth the trip to go see them, whether you're near or far, and "La Cage Aux Folles," is a lovely ride.

"La Cage Aux Folles" will run from August 31 to September 24 at Stage Door Theatreâs new location, the Lauderhill Performing Arts Center (LPAC). The theatre is located at 3800 NW 11th Place, Lauderhill (33311), in the Central Broward Regional Park on the North East corner of Sunrise Boulevard and 441 (State Road 7). For tickets, call 954 344 7765 or www.stagedoorfl.org.