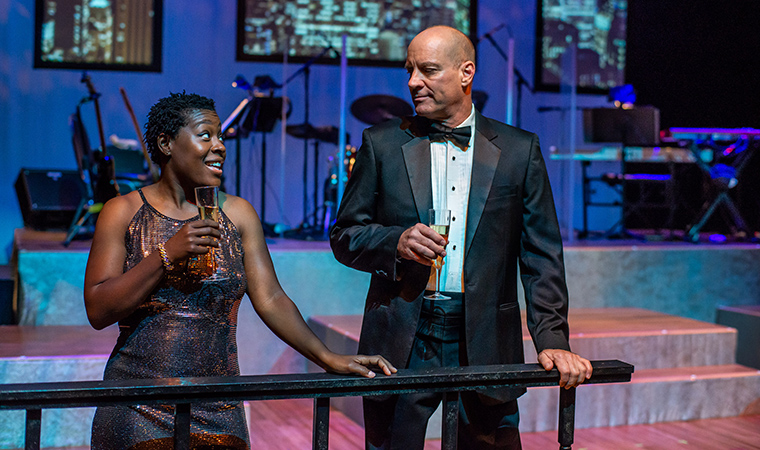 The 25-year-old talking tiger leans forward, curls its claws, and stares straight ahead with a fierce and cunning expression.

"Cat got your tongue?" the animal teasingly asks the frightened couple, speaking with a hint of a British accent.

Certainly, one could understand if the couple became tongue-tied. After all, how often does a talking tiger express interest in a couple's marital problems?

You will meet a variety of characters. Specifically, they include the aforementioned tiger, an arrogant, school-aged tetherball champion, as well as a sultry waiter whose enthusiasm for dancing the Tango is contagious.

While some of the featured works amount to escapist fare, others may put your mind to work and move you. And some pieces may accomplish all of the above.

The best short plays skip or severely limit exposition, quickly introduce the conflict, and possess a clear focus, as well as a beginning, middle, and end. Some pieces in this year's version of "Summer Shorts" fare better than others.

This year's playwrights include big names, such as Lin-Manuel Miranda, the creator of the musical "Hamilton," as well as Steve Yockey. He created HBO Max's "The Flight Attendant." Meanwhile, well-known playwrights such as David Lindsay-Abaire, a 2007 Pulitzer Prize winner for "Rabbit Hole," and Dominique Morisseau also comprise this year's group of writers. 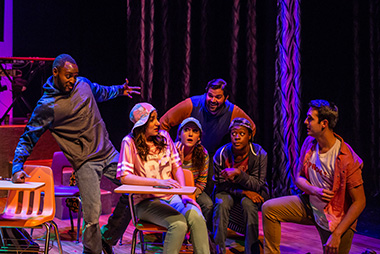 Veteran and versatile South Florida actor Jovon Jacobs, one of the many cast members, is masterful as a talking tiger in Yockey's short play, "Go Get âem Tiger!"

The piece, which is receiving its world premiere, concerns a couple visiting a zoo. When Linda accidentally drops her purse in the tiger enclosure, her husband, John, decides to jump over the fence to fetch it. Fortunately, nobody becomes injured. However, the incident catches the attention of the zoo's operators. And a curious tiger wonders if he can ask the couple some questions. Realism turns to surrealism.

In fact, Linda and the tiger share at least one thing in common. Specifically, both wanted a change from their current circumstances. Perhaps Linda felt trapped in her marriage, just as the tiger felt stuck in his enclosure.

Watching people is "basically all I do now besides eat, sleep, and play with this big rubber ball with a bell in it that just drives me fucking nuts," the tiger informs the couple.

Yockey gets to the play's main action fairly quickly. However, he could have eliminated about a page of dialogue in the beginning. But once the play gets going, "Go Get 'em Tiger!" is a hoot. While the piece may require a greater suspension of disbelief from audiences than other plays, it is worth it.

And the play offers proof that sometimes, it takes a talking tiger to help somebody spill the truth.

Alex Alvarez and Lindsey Corey are believable as the couple who are growing apart. In particular, the tension between them is palpable.

Jacobs, appropriately sporting a stripped outfit, deftly places his body into positions that suggest the postures and movement of a tiger. Refreshingly, Jacobs avoids roaring. Instead, he relies on the playwright's words to create a unique character.

Director Michael Yawney expertly paces the play, which should leave you in stitches. 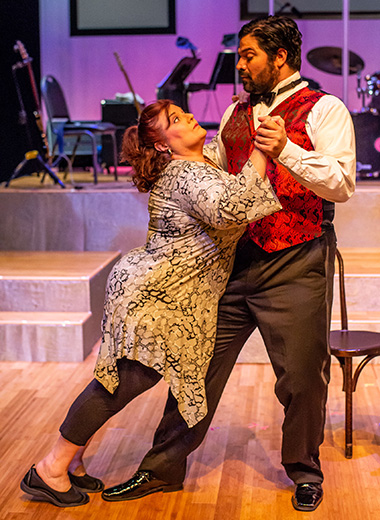 Technology is supposed to make life easier, right? In theory, yes. But Lindsay-Abaire, in his short play, "Misdial," hilariously shows us how, ironically, technology can complicate life. Actually, watching the play might bring to mind one of your own bouts with technology.

In "Misdial," which is experiencing its Southeastern premiere, Fran answers a call from a wrong number. Soon, she learns that nobody can understand her during a hilarious mess of miscommunication.

While City Theatre Miami's "Summer Shorts" offers lighthearted, escapist pieces, the festival does not shy away from serious, mind-exercising fare. A case in point is "Night Vision" by Morisseau, experiencing its Southeastern premiere.

In the play, Ayanna, and her husband, Ezra, witness a man beating a woman in the dark of night. Ayanna believes that in this case, doing the right thing means calling the police to help them catch the suspect. But how reliable will her descriptions be? After all, neither she nor her husband caught a clear image of the attacker. Also, Ayanna will have to be mindful of her assumptions she, and many of us, might make after witnessing a similar situation.

With incidents of racism on the rise, "Night Vision" can serve as a cautionary tale about our own assumptions, prejudices, and beliefs. 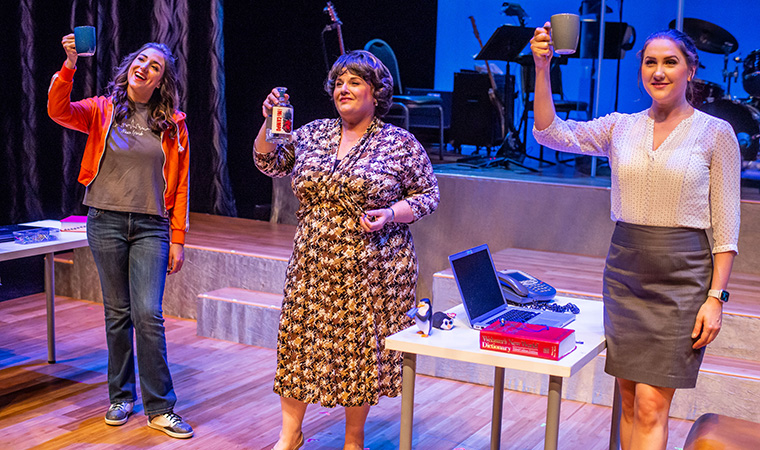 Another cautionary tale among this year's line-up of shows is "21 Chump Street," with music and lyrics by "Hamilton" and "In the Heights" creator Lin-Manuel Miranda.

This short musical's basis is a true story by Robbie Brown. It originally appeared on WBEZ's "This American Life."

In the piece, which City Theatre Miami produced in its 2017 version of "Summer Shorts," Justin is an 18-year-old high school student. He believes he has just met the girl of his dreams in Naomi. In reality, she turns out to be the woman of his nightmares.

Musical creators, particularly the late, great Stephen Sondheim, have repeatedly proven that shows with dark subject matter can work as musicals. But "21 Chump Street's" songs do little to deepen the characters' emotions or move the plot along. However, one song allows Justin to more fully express his desire to be with Naomi.

In "Hamilton," Miranda repeated lyrics at times. To some extent, it worked because the repetition helped with emphasis. That is not the case here. In "21 Chump Street," Miranda needlessly repeats lyrics over and over again to the point that they become annoying and you just want to cover your ears. Besides, the music is forgettable. The show has a strong enough dramatic drive to work as a straight play.

Margaret M. Ledford solidly directs this production. It marks the show's second appearance at "Summer Shorts." The piece was part of the festival's 2017 line-up. 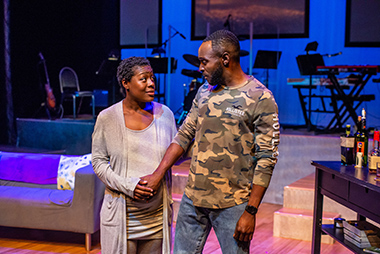 In the timely and realistic short play, "Winner," by Amy Berryman, Tori Walker has just become the first Black woman to win a prestigious playwriting award. And she is happy to meet her hero at the after party. He is legendary playwright Charlie Harvard, whose play did not win. What starts out as an amicable evening turns into a heated discussion between a character of privilege and one belonging to a minority group.

This stirring play deftly demonstrates how much harder artists of color sometimes have to work in order to gain the respect they deserve for their prestigious accomplishments. Of course, they must put their talent to excellent use. However, they must sometimes also fend off claims that they won a prestigious honor just so that judges can say that they value diversity.

"It's the climate," Harvard tells Walker while explaining why he thought she won the award.

But the tense racial climate in this country does not only hurt minorities. Berryman demonstrates that the problem is more complex than that by letting Harvard air his complaints. Specifically, with racial quotas in place, and more attention focused on valuing diversity, Harvard suggests that the efforts of white men such as himself can go unrecognized.

Speaking of awards, "Winner" was a 2020 Finalist in City Theatre Miami's National Contest for Short Playwrighting.

Under James Randolph's solid direction, the performers segue seamlessly from pleasantness to irritability and defensiveness. 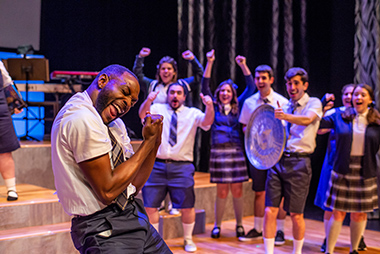 Jovon Jacobs (foreground) celebrates in "Chronicles Simpkins Will Cut Your Ass" at the Summer Shorts festival. (Photos by Justin Namon)

Other plays in the lineup include:

"A Little Bit of Culture" by Staci Swedeen, originally produced in Summer Shorts 1999. In the piece, a music lover and his friend attend a classical music concert. If the play leaves us with any message, it may be to never doubt the power that art possesses to move us â in this case, literally.

"Webster's Bitch" by Jacqueline Bircher, which is experiencing its Miami premiere. The play was a 2020 winner in City Theatre Miami's National Contest for Short Playwriting.

When someone overhears the Editor-in-Chief of an online dictionary using profanity, the dictionary's employees find themselves at the center of an Internet uprising over gender and obscenity in the age of social media. Office politics collide with ambition, morality, and lexicography.

"Tango! The Musical" with music and lyrics by Joe Illick and a book by Susan Westfall, one of three co-founders of the "Shorts" festival. This show took the stage as a short play in 2013. Now, this 2022 piece is experiencing its world premiere as a musical. In it, a bored married couple are at their weekly dinner out. They do not expect anything exciting to happen. However, exotic and sultry waiters have something exciting planned for the couple.

"Chronicles Simpkins Will Cut Your Ass," by Rolin Jones. In this piece, the titular character, who is in the fourth grade, is the Undisputed Unified Tetherball Champion of Recess, Lunch, and After School. In fact, she rules Woodlake Avenue Elementary's tetherball court with an iron fist. But what happens when another youngster decides to challenge her? City Theatre Miami originally produced this piece for Summer Shorts 2008.

"A Small Breach In Protocol At Big Rick's Rockin' Skydive Academy" by Daniel Hirsch. Existential questions about meaning, power, and mortality can pop into and get stuck in your mind when you are plummeting 200 miles per hour to Earth. This play is experiencing its Southeastern Premiere. Also, it was a 2020 finalist in City Theatre Miami's National Contest for Short Playwriting.

In addition to the performers, writers, directors, designers, and crew directly involved in putting on "Summer Shorts," a live band plays songs that Baby Boomers will recognize. The band performs about 30 minutes before curtain. Also, the quartet performs as interns change the scenery in between plays. The band comprises Jacob Randall Holmes (conductor and keyboard), Wayne Schiferl, (bass); Roy Fantel, drummer/percussionist, and Greg Minnick (guitar).

Whether you are in the mood for pure escapist fare, or you wish to put your mind to work, 2022's "Summer Shorts" has something for you.

"Summer Shorts" runs through July 2 at the Carnival Studio Theater at the Adrienne Arsht Center, 1300 Biscayne Blvd. in downtown Miami.