Tame 'Joker' Has No Madness In Its Soul 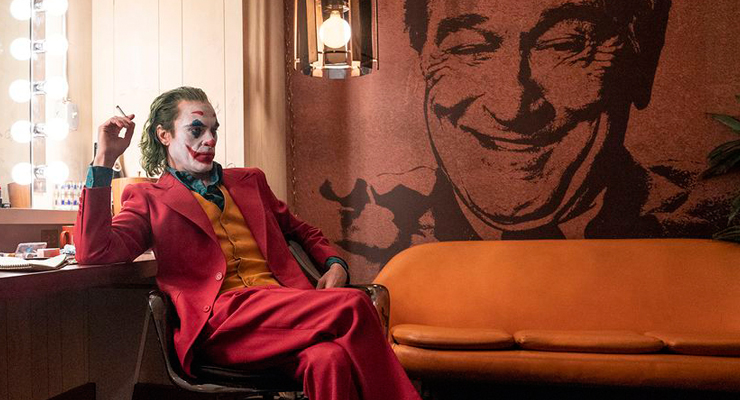 You need a certain grasp on mental illness if you're going to make a movie about the subject, even one aiming to tell the story of how one of the most iconic comic book villains became the formidable evildoer he is today. Before considering all the other ways it comes up short, "Joker," our sorta grim, sorta moody, thoroughly self-satisfied current box office champ, fails at this most basic of levels. It's never able to go beneath the clown makeup to let us feel the all-consuming rage inside. There's a rigidly choreographed inevitability to the mayhem, and that's a betrayal of what makes this impish psychopath tick.

So how does Todd Phillips, the prolific studio hand behind such enduring bro epics as "Old School," "War Dogs" and the "Hangover" trilogy, convey aspiring stand-up comedian Arthur Fleck's descent into murder-driven insanity? By positing the budding evildoer as the victim of bullying and class warfare. As the current parlance goes, that's a choice, one that's turned the Warner Bros. release into a lightning rod for ubiquitous social media flareups. It plays like a Rorschach test for where you stand on issues like incel violence, social inequality and the mass media's stronghold on the cultural conversation.

How you feel about '80s nostalgia also factors into how you will react to this skin deep origin story. The year is 1981, as Phillips' keeps reminding viewers at every turn, beginning with the nifty logo Warner Bros. used at the time. The setting is Gotham City, though the movie does little to hide that this is a slightly fictionalized variation on Ed Koch's New York. 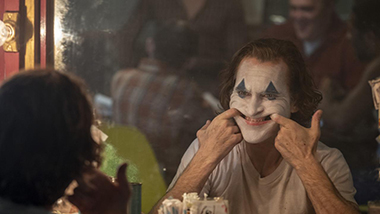 Fleck (Joaquin Phoenix, reaching into his tic-driven bag of tricks) barely makes ends meet as a clown-for-hire. There he is, sporting a lime green clown wig as he races after a bunch of hooligans who took off with his ad sign. Cue the ass kicking and the glimpse of the ne'er-do-well writhing in pain in a back alley. Exposition comes soon after, in the form of meetings with a social worker who berates Fleck for not writing on his journal, then is confounded when he shows the notebook filled with (not very good) jokes and nondescript sketches meant to denote antisocial behavior. As if that needed spelling out.

The situation at the apartment he shares with his mom Penny is just as depressing. Penny ("Six Feet Under's" Frances Conroy, returning to the DC Universe after playing Halle Berry's mentor in "Catwoman"), ill and bedridden, whiles away the hours watching Murray Franklin (Robert De Niro), a Johnny Carsonesque late night TV host, and begging her son to contact the employer, moneyed philanthropist Thomas Wayne (Brett Cullen, giving a thuggish spin to Bruce's dad). Nothing about the mother-son interaction suggests a shared past with either character, not even after it's revealed both have loony bin stints in common.

Ah, but Fleck has dreams, big dreams, of rising above this urban purgatory to be Murray's guest. Then he'll be on his way. He'll make them all see the comic genius behind the creepy demeanor and involuntary laughing fits. Unbeknownst to him this is where his heretofore unexplored capacity for grisly acts of violence will come into play. How do we know he's succumbing to the darkness within. He does this trancelike dance I like to call bathroom tai chi.

"Joker's" premise is actually pretty intriguing, once you set aside any qualms you might have about revealing the background of a character who derives much of his strength from the aura of mystery that surrounds him. Joker as a bottom feeder with daddy issues who just wants to make what is arguably the country's toughest audience laugh? It sounds, at least on paper, like a nifty DC Elseworlds one-shot comic aimed at older (notice I did not say mature) readers. 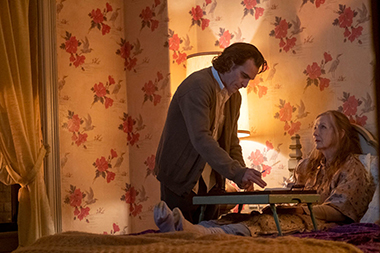 But instead of mining the setting for texture and an enveloping sense of dread and unease, Phillips is all too content playing Scorsese cosplay, with a dollop of Paddy Chayefsky thrown in for good measure. This Joker's Gotham is all window dressing. Smoke and mirrors. Even the obstacles Fleck faces feel more like items on a checklist than daunting challenges. The filmmaker's affection for "Taxi Driver" and "The King of Comedy" is palpable, but even more glaring is a reluctance to plumb the depths of the demons that drove Travis Bickle and Rupert Pupkin, both played by De Niro in his prime.

For all the criticism Phillips has encountered that he's leaning too much on his influences, "Joker" still feels like the work of the bully who, by making "The Hangover," gave bros their own quotable, male-bonding variation on "Bachelor Party." (Have you tried watching that repellent comedy lately? It's aged particularly poorly, but let's face it: It was bad news to begin with.) And when you have a movie jock telling the story of a marginalized weirdo who goes off his meds, there's a noticeable dearth of nuance in said pariah's journey.

In addition, for all the effort Phillips makes to set this film apart from more direct adaptations of DC Comics characters, he's awfully eager to trot out faces and places familiar to even the most casual Batman fan. The tie-ins are more than superfluous; they're counterproductive to Phillips and co-screenwriter Scott Silver's attempt to distance themselves from more familiar elements that, at least to this reviewer, keeps the film shackled to a cinematic universe it should not feel obligated to acknowledge so pervasively. A busy and obstrusive score, by Icelandic composer Hildur GuÃ°nadÃ³ttir, telegraphs almost every turn from the threadbare plot well before it happens. 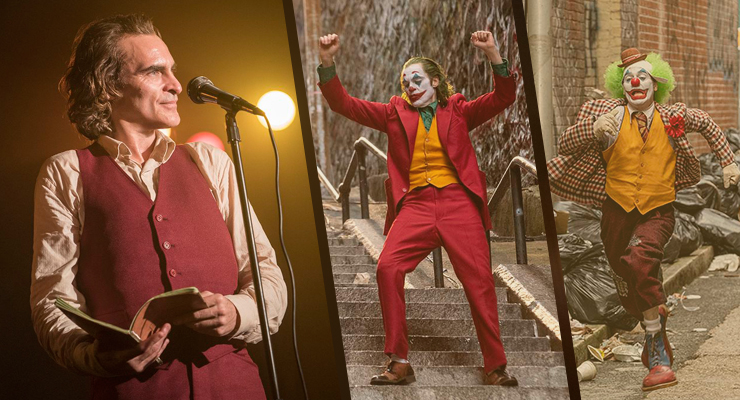 The most crucial aspect of this Batvillain that Phillips and Silver fail to capture is how he thrives on embracing chaos. There ought to be a sense of anything-goes menace to his actions, even at this early stage, something that both Tim Burton and Christopher Nolan, that squarest of mainstream auteurs, understood innately. But "Joker" can't be bothered to keep moviegoers on their toes. It has a schedule to keep, impressionable fanboys to rile up, filmographies to borrow from. (Scorsese homages abound, but it also reminded me in parts of another New York-based filmmaker: Abel Ferrara, a loose cannon who might have turned this material into something that truly gets under your skin.)

The filmmakers have left Phoenix high and dry. The star wrings out some pathos out of a lazy, undercooked script, but this is hardly a breakthrough for the Oscar nominee, who was much, much better playing another mentally unhinged man caring for a sick mother in Lynne Ramsay's "You Were Never Really Here." 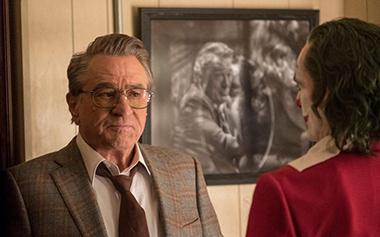 Admittedly, before the film reaches its mundane, preordained ending, Phillips does pull off some brutally effective bloodshed. And its climactic confrontation, unfolding before TV cameras' unblinking gaze, gives Phoenix and De Niro a chance to go on a verbal mano-a-mano. Yes, it gives the director an opportunity to step up to the soapbox to deliver a facile rant that spoonfeeds the film's message to viewers, but the scene is competently executed, even when it's pretty obvious where it's headed.

Such moments, however, are fleeting, breathing spaces in a movie about societal chaos where order prevails, a peer into the abyss of madness that doesn't have a crazy bone in its body. It's a vapid poseur of a movie, a weakling trying on a brawler's knuckles. Heath Ledger's maniacal agent of destruction would have kicked this sorry-ass loser off Gotham's tallest building.