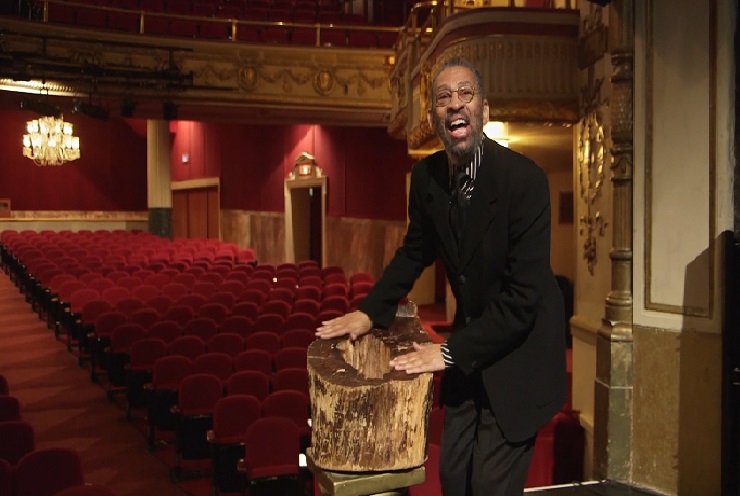 Maurice Hines walks into a room and a string of successes follow him, includingÂ  Francis Ford Coppola's "The Cotton Club" and Broadway's "Eubie." Hines is described as energetic and his tapping technique as fast and clean. All this is apparentÂ  in the moving documentary by John CarluccioÂ  and produced by Tracy E. Hopkins.

"Maurice Hines: Bring Them Back"Â  brings to the screen a fusion of Hines personal and professional life. It reintroduces (or introduces) artists who shared the stage and/ or the screen with him. It brings us full circle from Maurice at 75, backÂ  to his youth and through adulthood , and back. It is a profound look at a man who has lived much of his life in the publicâs eye along with his younger brother Gregory.

The Hines brothers began dancing at age three and five. In conversation, Maurice recounts how the school didnât want to take his brother because they felt he was too young for classes. Maurice would not dance without his brother, so they both became students. Thus, began a long partnership, on stage and in the movies, between the two brothers. The documentary features wonderful film clips of the two young brothers tap dancing. Maurice comes across as more outgoing while Gregory seems more withdrawn. That they worked hard is evidentÂ  from the clips.

âGregory learned steps faster, but would forget it, I learned slower but would remember it. So, we helped each other,â Maurice said.

Â The Hines brothers appeared often at the Apollo Theater in Harlem, but longÂ  before that, they would spend whole days at the theater, watching each show and progressively moving forward until they were near the stage where they could really see the feet of the tappers. TheyÂ  appeared 35 timesÂ  on "The Tonight Show with Johnny Carson." Maurice credits Carson for âMaking us stars.âÂ

"Maurice Hines: Bring Them Back" is a powerful film in its depiction of an artistÂ  looking back on his career while still performing. He lets us into his personal world, revealing private events such as the falling out with his brother, Gregory, where they did not speak for a decade. Eventually they reconciled. One of the most poignant moments in the film is when Maurice recounts Gregory telling him that he will miss growing old with him, miss reminiscing with him on a lifetime of shared experiences. Gregory diedÂ  in 2003.

Maurice is still appearing at workshops and performing. His partners are the Manzari Brothers, two brothers from the Washington, D.C. area, Maurice met them in a workshop when they were 15 and 17, and says they are great. "YouÂ  know it when you see it.â The Manzari Brothers were featured with MauriceÂ  in the remake of Sophisticated Ladies. They have also appearedÂ  as guest artists on "So You Think You Can Dance."

"Maurice Hines: Bring Them Back" is a poignantÂ  homage to an artist who is still going strong. It captures theÂ  triumphs and trials of a man who has lived a life in the theatre. Maurice opens up completely to the camera. Director Carluccio has given us a film which captures the personal with the professional. The film won a Grand Jury Prize atÂ  DOCÂ  NYC in November and will have its Florida premiere on Sunday, March 8 at the Miami Film Festival.Â  Itâs a film you will want to come back to.