One-Woman Show at Empire Stage a Cast of Characters

Debra Ehrhardt enters through the blackout curtains and she's got you. You're trapped, wrapped and for eighty minutes completely under the spell of this magical storyteller.

Fort Lauderdale's Empire Stage is a black box theater with a lighted back wall. A simple mat black lectern, three black boxes and black wooden chair are all that Ehrhardt needs to tell her story of a dream realized: she moves from Jamaica to America. But what a move. 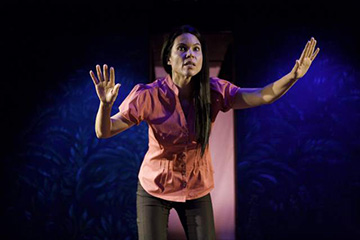 There's a fine line between laughter and hysteria and Ehrhardt dances along it with marvelous precision. She's a funny woman with a terrific flair for becoming other people. Vocally, physically and exuding the inner spirits of her subjects, she becomes those who delight and those who terrify her as she struggles to escape her island.

She's an 18 year old typist (we've already met her drunken father, her bible washed mother, her going nowhere friends) when she sets her cap for Jack, a CIA agent whose grand allure is his ability to travel freely and regularly between Jamaica and the United States. It is the late 70s, a revolutionary time on the island and all who can, flee. But she cannot get a visa, she has no money. But her boss has and he wants to get it out of Jamaica to the safety of America. So the deal is made: he'll get her the visa and all she has to do in return is smuggle his one million dollars into the States. What could be easier? She'll ride Jack the CIA man's coat tails, after all it's only her suitcase of clothing. Right.

She's a wow at the girlish arts so suddenly she's driving a rental car all night to Montego Bay where she'll meet her love-struck spy in the airport cafe. Easy peasy. Not. Sheep and goats at midnight on a lonely country lane and she's wrecked. Three machete toting thugs appear and offer to "help" her. She escapes, so never mind. Million dollar bag in tow she rides a local bus to its destination: a town so poor there's no power and the goats are kept inside. As her troubles increase so does the hilarity. A friendly Madame importunes her, another bus ride, this time with Satan himself as her seat mate. Once more she escapes, only to be caught later by the, Oh Lord, the Satanic raper himself. And she escapes. Again.

The performance pitch is at a shattering level, the crowd roaring, Ehrhardt stomping, whirling, flinging herself from one character to the next, one moment the fear ridden girl, the next the Devil himself, her face the personification of evil.

And then she gets to the airport and the guilt and fear take over. Will Jack meet her in time? Will she get the money through customs? Will she deliver it to the two toothed Chinaman named Bullet?

Debra Ehrhardt is no beginner at one woman shows. Not only did she write Jamaica Farewell, filled with humor and passion and based on incidents in her own life but she also created the award winning Mango Mango and Invisible Chairs later optioned as a sitcom by Fox.

Jamaica Farewell is directed Joel Zwick and you can see it through October 19 at Empire Stage, 1140 North Flagler Street, Fort Lauderdale. 954-678-1496 http://www.empirestage.com