The Little Dog Laughed, And You Will Too 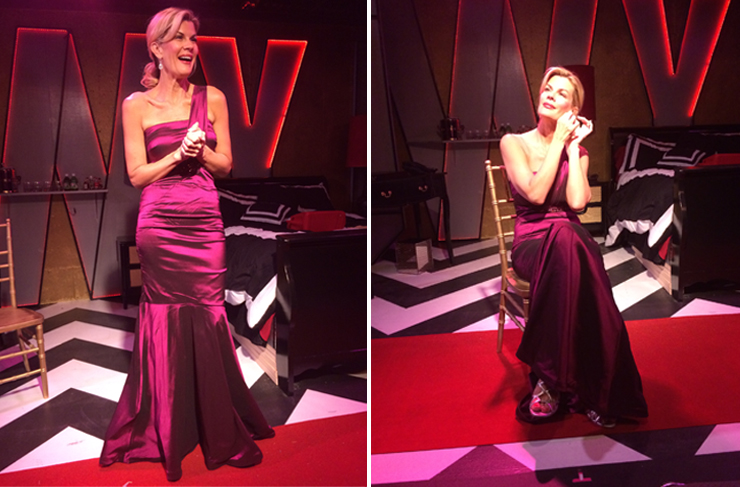 Mia Matthews as Diane in The Little Dog Laughed

Sure, there are lots of openly gay actors, a lot more than there were when Beaneâs comedy premiered in 2006. But can an openly gay actor become the kind of movie star that can open a huge movie as a romantic leading man? Nine years later we still donât have one of those.

The Little Dog Laughed centers on Diane (Mia Matthews) a Hollywood agent, and her pet client, Mitchell (recent Carbonell Award winner Chris Crawford), a handsome, up-and-comer who needs the right role for his breakthrough. Diane and Mitchell have come to New York to see a play that might serve as that perfect vehicle for Mitchell, and while there, closeted Mitchell falls for the cute, gay-for-pay rent-boy, Alex, (Michael Uribe) he hires for the evening. This is much to Dianeâs chagrin, as she knows that selling a straight actor with a âslight recurring case of homosexualityâ as the next matinee idol is one thing, but selling an openly gay romantic leading man to the movie-going public? Not so much. Mitchell and Alexâs burgeoning relationship is complicated by Alexâs girlfriend, Ellen (Ashley Chang), who has some eye-opening news for Alex.

Matthews is excellent as the acerbic Diane. Sheâs a tall drink of water who oozes sultriness and wears clothes like a runway model. Her expressions, which show her true feelings as she schmoozes phone callers, are hilarious. She glides through scenes, impeccably dressed, doling out her harsh, no-nonsense advice like a 21st century fairy godmother.

Crawford plays Mitchell like a farm boy on his own in the big city. Heâs surprisingly innocent and wide-eyed for an actor whoâs been kicking around Hollywood for a while. He does convey Mitchellâs dilemma very well, struggling between who he is and who he needs to be for the sake of his career.

Uribe has a handsome face and an impressive, sculpted chest, but heâs not just eye candy â his performance is equally impressive. Uribe and Crawford share some deep, intimate moments, and the production is better for it. Change rightfully plays Ashley with a quirkiness â sheâs very convincing as a young woman whoâs been around the block a few times but suddenly, facing grown-up problems, manages to rise to the occasion.

The best scene in the show belongs to Matthews and Crawford, as Diane and Mitchell lunch with an unseen, Hollywood-shy playwright referred to as He Meaning Him in order to buy the rights to turn his latest play into a movie. Beaneâs writing is at its best in this scene, in which the Hollywood power odd couple work together to flatter and gently cajole the rights away from He Meaning Him. The entire scene is like a beautifully played piece of music, hitting all the right notes, and weaving in a perfect harmony.

The set is a rare misstep for Carbonell Award-winning scenic designer Michael McClain. Thereâs a clever wow factor in the letters that serve as the backdrop, as it gives the illusion that the characters are behind the famous Hollywood sign, which becomes a metaphor for the plot. But the main set, Mitchellâs hotel room in New York, is too garish for a movie star, even an up-and-coming star. The black and white color scheme could have looked elegant and upscale, but the thrift-store furniture is so obviously painted, and the splashes of color â red lampshades? Really? â make the room look shabby, and not in the cool shabby chic way.

The Little Dog Laughed runs through May 17 at Island City Stage in Fort Lauderdale. For tickets and more information, visit IslandCityStage.org.