There's Been a Loss in Miami's Movie Community

Ushering in 2023 Without the Tower Theater

Why are goodbyes so difficult? They should come as easily as saying hello to people you like. But no. When something draws to a close, sometimes one strives to retrieve words that remain stubbornly out of reach.

Before you jump to conclusions, I'm not leaving. I've finished my eleventh year reviewing movies (and one TV series) for miamiartzine.com and am jonesing for 2023 content.

But a theater has closed in Miami, and to many of us South Florida cinephiles, the loss feels seismic.

The Tower Theater was built back in 1926 and opened its doors in December of that year as a first-run house, when the dominance of silent cinema was about to be overtaken by the advent of talking pictures. The space, located on the corner of Calle Ocho and Southwest 15th Street alongside Domino Park, changed hands over the decades, becoming a venue where Miami's burgeoning Cuban community could see films and, with the help of Spanish subtitles, acclimate their ears to English-language fare. 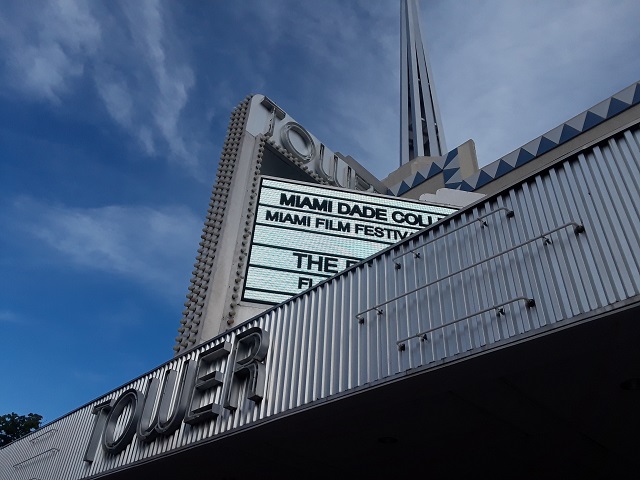 The Tower Theater was a Miami cultural landmark picked by USA Today as "one of the 10 great places to see a movie in splendor." The photo is from 2019 when the theater was showing Lulu Wang's "The Farewell." (Photo by Ruben Rosario)

In 2011, now under the stewardship of Miami Dade College and glamming it up several times a year as a showcase for Miami Film Festival premieres and member screenings, the cultural landmark, was picked by the newspaper USA Today as âone of the 10 great places to see a movie in splendor.â

Considering the damage that the coronavirus pandemic inflicted on movie exhibitors, it came as little surprise when City of Miami officials opted not to renew MDC's contract to keep running the Tower. The news spurred a petition and protests outside the Little Havana destination, but a few weeks ago, when I checked the showtimes on a whim, there were none.

An official with Miami Film Festival confirmed the theater's closure but did not elaborate. Since MDC is still on winter break, an official statement will have to wait until January.

The Tower's closure comes months after MFF underwent its own seismic upheaval with the departure of executive director Jaie Laplante back in May following 12 years with the organization. At the time of his announcement, the 52-year-old called his time at the festival âthe greatest experience of my life,â but several aspects of the way he ran things, such as the elitist vibe that surrounded many of the events, tended to rub me the wrong way.

Here's hoping whoever follows in his footsteps is able to find a way to make MFF a festival that is more easily accessible to cinephiles who lack the resources to be on the high-end donor's circle.

So it is in this spirit of democracy and aversion to snobbery, with bittersweet memories and a longtime moviegoer's gratitude, that I am fondly looking back at the Tower Theater: for giving film aficionados a space of their own, for the programmers' commitment to show Latin American and French cinema, in many cases with titles that other independently run theaters opted to pass over.

Whether it was inside the large and comfy Auditorium 1 or the much cozier Auditorium 2, there's no doubt the Tower made an already special neighborhood even more special. Fittingly enough, the last film I saw at the Tower was âLiving,â director Oliver Hermanus' touching and impeccably crafted remake of Akira Kurosawa's âIkiru,â headlined by a stellar Bill Nighy, as part of the 2022 GEMS Film Festival. (It's set for an early 2023 commercial release.)

The Tower closed its doors back in 1984, so this is not the first time its future has been in peril.

Maybe this is not goodbye after all, but merely an extended âsee you later.â Here's hoping those responsible for its next chapter take its value as a purveyor of independent, international and arthouse fare into consideration. But I'm not holding my breath.