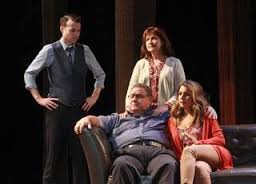 Director David Arrisco says he has passion for playwright Sean Grennan's works. It's easy to see why. Actor's Playhouse is presenting Grennan's The Tin Woman, the story of a woman's life after her heart transplant. Along with her struggles, Grennan has a dual story that runs through the play about a family who is mourning the loss of their son. He is the person whose heart The Tin Woman has received.

Grennan's play digs deep into life, death, what it mortality means to those that are near death, left behind after someone's death, and even, in this play, how the ones that have died view their passing.

The Tin Woman, however, is not all dour. Grennan infuses his play with a cynical humor, especially in the personality of his lead character â ironically (or maybe not) named Joy. Jennifer Christa Palmer is spot on with her portrayal of the pessimistic, post-operative recipient of a heart that she feels she isn't important enough to deserve.

The play is written with wit and tenderness and Arrisco's direction and his cast captures its essence. 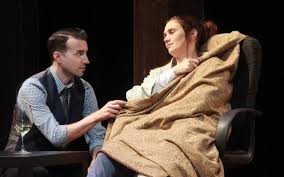 Actor Ken Clement, one of South Florida's most revered actors who left the area recently to move to Los Angeles, and lucky for us he returns in the role of the hard-crusted father of the deceased donor named Hank. He hasn't come to grips with the sudden death of his son, Jack (Cliff Burgess), yet won't emote except in anger about it. His wife, Alice (Laura Turnbull), has enough emotion for both of them.

Clement and Turnbull are magnificently yin and yang, capturing the routine of a long-married couple and how they manage together and separately through a family tragedy.

Grennan uses his character of Jack as a bridge between the two worlds â those of Joy and of Jack's survivors, who also includes Jack's sister, Sammy (Natalia Coego). Jack's ghost traverses the two worlds and Burgess creates an aura through his believable characterization thatâs a soft spirit.

Llela Elam provides comic relief as Joy's nurse (if you've ever been in a South Florida hospital you've met Elam's island-inspired nurse) and the actress doubles as Joy's jovial best friend Darla. These characters and the role of sister Sammy are the most broadly drawn and, while the actresses do their best to find depth in them, it is difficult to overcome the one dimensionality of them. Sammy's character starts off strong only to come from left field as a serial crier. The silliness of the way the comedy is approached is starkly in contrast to Grennan's other polished comedy that he's given to Joy and, at times, Alice. A water-in-the-ear joke that runs through the second act that plagues Sammy's character is confusing and nonsensical along with her loopy and kooky, glob on to Joy when she meets her for the first time.

The Playhouse's Resident Costume Designer Ellis Tillman scores especially with his fun outfits that don Darla, which get their own laughs.

The Tin Woman captures heartbreak and loss with sensitivity and comedy and heartwrenchingly shows what life is like when you get a second chance.

The Tin Woman plays in the intimate upstairs stage at Actors' Playhouse through June 12.

Grennan will be in the audience Friday, May 27 for the performance and a talk back after the show. Every Friday and Saturday, post show discussions with South Florida Donor Programs and the shows cast and creative team continue through June 12.

For ticket prices and exact times, go to www.actorsplayhouse.org.