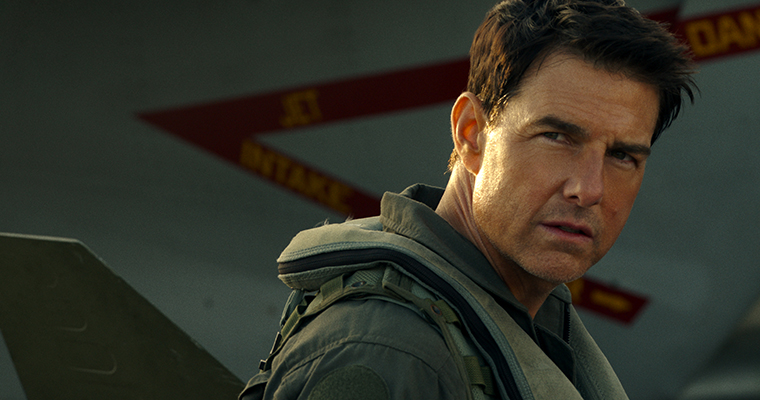 Time to rip off the Band-Aid. Before you strap in for "Top Gun: Maverick," those who hold the unabashed homoeroticism of the 1986 original in high regard might be disappointed to know that the legacy sequel keeps the beefcake to a golden-hour minimum. Let us take a moment to mourn the missed opportunities this COVID-delayed tentpole, with so many immaculate torsos as its disposal, allowed to fly by.

Now that that's out of the way, let's focus on the better news. This slick star vehicle is a pulse-pounding time at the movies. It's a visceral dogfight melodrama bolstered by hyperclear camerawork, spectacular stunts and the kind of larger-than-life emotions that recall a decade considerably older than the 1980s homage it highlights as a key selling point. Whatever its weaknesses are, and we'll get to those in a minute, this is not a soulless cashgrab. 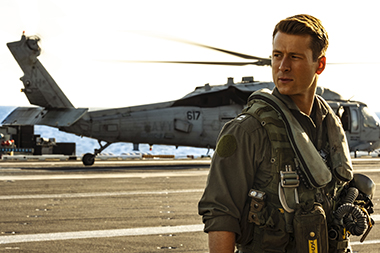 Director Joseph Kosinski ("TRON: Legacy") might be the name in the credits, but "Maverick" lives and breathes Tom Cruise. This is understandable. The Paramount Pictures release allows the Oscar nominee to reprise the iconic role that helped catapult him to megastardom. Consequently, the film plays like the cinematic equivalent of a military function that aims to impress the big brass. It's a state dinner where not a single utensil is out of place. There's no doubt Cruise has worked overtime to ensure this once-in-a-blue-moon shot goes off without a hitch. The finished product exudes professionalism and is driven by a deep affection for the titular character.

It has been 36 years since we last saw Pete "Maverick" Mitchell, but as the movie opens, it almost feels as if time has stood still for the hotshot Navy pilot, in more ways than one. If anything, the lines on his face make him even more handsome than before, though even at 59, Cruise remains too much of a pretty boy to be called rugged. As the movie opens, Maverick pulls off a last-ditch stunt to help prevent the hypersonic scramjet program where he serves as a test pilot to be scrapped. Once again, he revels in defying authority, and does so with that trademark smirk. The officer ready to pull the plug, Rear Adm. Chester "Hammer" Cain (a blustery cameo by Ed Harris), can't wait to see Maverick packing. 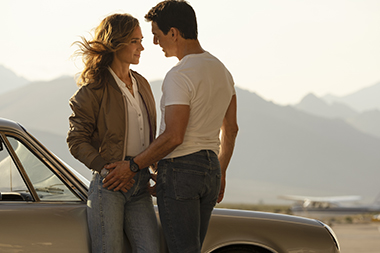 But a face from the past extends a lifeline. Maverick is ordered to report back to Naval Station North Island in San Diego. Yep, he's heading back to Top Gun. Who made the career-saving request? None other than Adm. Tom Kazansky (Val Kilmer), aka Maverick's old frenemy "Iceman." Kosinski, working from a screenplay credited to Ehren Kruger, Eric Warren Singer and Christopher McQuarrie, shrewdly delay the reunion between Cruise and Kilmer, adding an extra layer of suspense for fans of the original.

Once he reports for duty, Maverick encounters the good cop/bad cop duo of Adm. Solomon "Warlock" Bates (TV vet Charles Parnell) and Adm. Beau "Cyclone" Simpson (a grumpy Jon Hamm), who lay out the task at hand: he is to train an elite group of young pilots to undertake a perilous mission to destroy an unspecified rogue nation's uranium enrichment facility. Odds of success (and survival) are slim at best, but let's give a moment to Mav, who's still processing the fact that he's about to become a teacher for the first time. 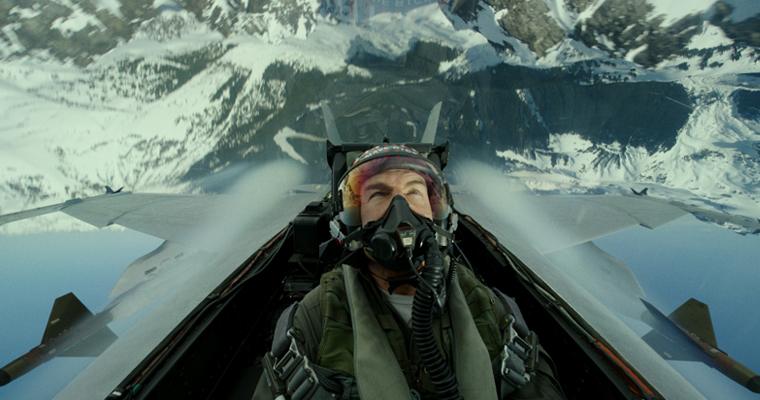 He may need smelling salts for the next bombshell: one of these young aviators is Lt. Bradley "Rooster" Bradshaw (Miles Teller), the son of Goose. Ah, yes, good old Goose, aka the original "Top Gun's" sacrificial lamb, played by a then supercute Anthony Edwards. Old resentments quickly bubble to the surface, at the same time that an old flame, Penny Benjamin (Jennifer Connelly), reenters the picture.

Kosinski and his creative team seamlessly navigate the myriad narrative strands. To their credit, there are no dead spots. But while the pacing never lags, it soon becomes apparent that, while "Top Gun: Maverick" is aces up in the air, it's on rockier terrain on the ground. While Connelly tears into a reasonably juicy role, in the process resembling and occasionally channeling Brooke Shields, the arc of her character is mostly relegated to sounding board duties. For instance, an intimate moment between Maverick and Penny is consumed by a discussion about Maverick's rift with Rooster. Not exactly romantic pillow talk in a scene that should, you know, be about the reunited lovebirds.

Then there are the elephants in the room. Why was Kilmer brought back, but not Kelly McGillis, Cruise's romantic interest in the 1986 film? (Watching Cruise and McGillis pretend to have the hots for each other, after all, was a rite of passage for LGBTQ audiences of a certain generation.) More glaring still, why wasn't Meg Ryan invited back? As Rooster's mother, she ought to be playing a crucial role here, but her absence is waved aside like an afterthought. 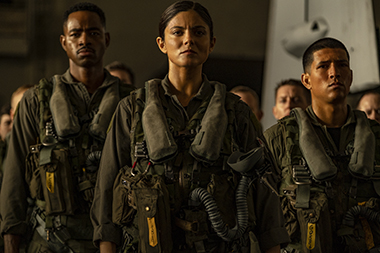 There's no way around it: "Maverick" is a man's man kind of picture. Kosinski, who previously teamed up with Cruise in the sci-fi adventure "Oblivion," has been obsessed with fathers and sons, and father figures in general, throughout his body of work. His most accomplished film to date remains the underseen firefighter drama "Only the Brave." "Maverick" fits right into his wheelhouse, with its intergenerational angst and prominent themes of guilt and redemption. He grants Cruise the chance to show more vulnerability than the actor has exhibited in years, and he infuses this Cruise vehicle with the kind of humor that's in scant supply in, say, the star's "Mission: Impossible" movies.

But as the daunting mission grows closer, the imperfections that set Maverick apart from the unflappable action men Cruise tends to play nowadays fall by the wayside, and the new "Top Gun" increasingly begins to resemble a "Mission: Impossible" entry: precise, elaborately staged and contoured around its star's dangerous displays of stamina. "Maverick" is a sequel that's been micromanaged within an inch of its life, not exactly what this "Top Gun" fan signed up for. 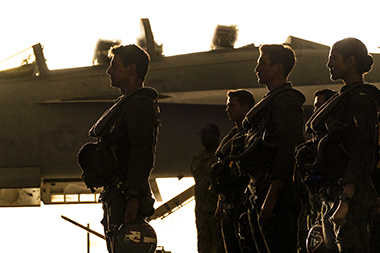 What emerges is a refusal to commit, evidenced in the faceless, unidentified foes the pilots are up against, but even more so in a final quarter that pulls back when a more downbeat conclusion would have felt like not just the most believable outcome, but the most dramatically resonant. Take away its military setting and state-of-the-art aircraft, and "Maverick" is a John Ford Western in disguise, "She Wore a Yellow Ribbon" to the original "Top Gun's" "Stagecoach." The lacerating exchanges between the competitive young pilots, not to mention Maverick's clumsy attempts at rekindling an old romance, feel distinctively Fordian. There's even a direct homage to the opening shot of "The Searchers" in the film's first scene.

But when push comes to shove, "Maverick" can't help indulging in improbable split-second saves and even less improbable bonding behind enemy lines. The verisimilitude Kosinski has taken great pains to establish gives way to crowd-pleasing formula beats, as the film's elegiac, one-last-ride melancholy ebbs away.

And yet, despite my issues, "Top Gun: Maverick" accomplishes what it sets out to do: deliver an expertly crafted nostalgia machine that pays tribute to its predecessor while making some notable improvements. It's prestige popcorn entertainment that has little use for the disreputable pleasures the late Tony Scott whipped up more than three decades ago. (Scott, it must be said, showed a finer appreciation of the male body.) "Maverick" may be a "better" film, but it's also antiseptic and vaguely neutered. It's good, but not that good.