'Us' And Them: Spring Movie Capsule Reviews

Catching Up With Jordan Peele's Buzzy Chiller, Other Releases

If it's spring, that likely means multiplexes (and to some extent, arthouses) across the country are experiencing a calm before the storm: that relatively quiet period between the end of awards season and the powerhouse onslaught leading to and including the summer months. If you're having trouble figuring out when that period begins, don't fret. âSummerâ at the movies has been starting earlier and earlier, so it's tough even for this critic to tell which end is up. 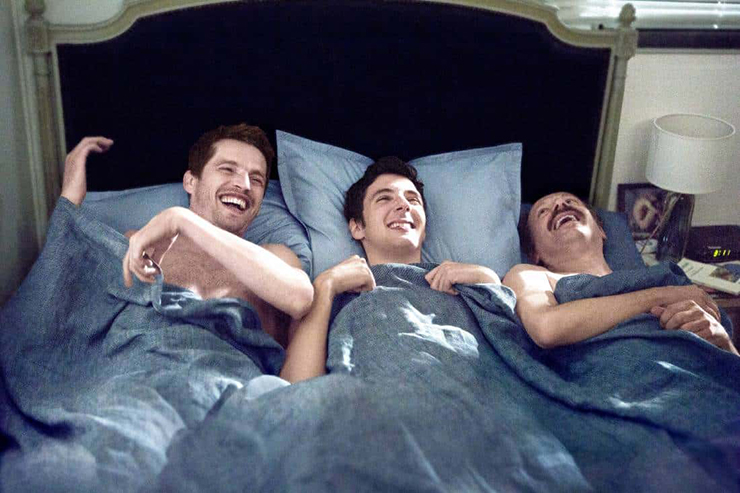 But before I talk briefly about four current movie releases, let's dish on a late winter release that fell through the cracks.

Fresh from its local debut at the Miami Film Festival, Christophe HonorÃ©'s âSorry Angelâ gave viewers an affectionate look at the a blissful yet all-too-brief affair, circa 1993, between Jacques (âStranger by the Lake'sâ Pierre Deladonchamps), an HIV-positive author of some notoriety, and Arthur (cutie patootie Vincent Lacoste) an adorably radiant twink who dates girls but is slowly realizing he likes guys more.

There's a lot of wisdom on display here about the ways of the human heart, but HonorÃ© (âLove Songsâ) can't help idealizing the characters' connection, to an extent that his rose-colored depiction of love in the age of AIDS lays on the sentimentality on this otherwise pert and charming romance. But despite my issues, this French import deserved more than the one-week local release it got at the Miami Beach Cinematheque (though kudos to them for showing this brainy, sensual and occasionally saccharine film).

Okay, on with the show. 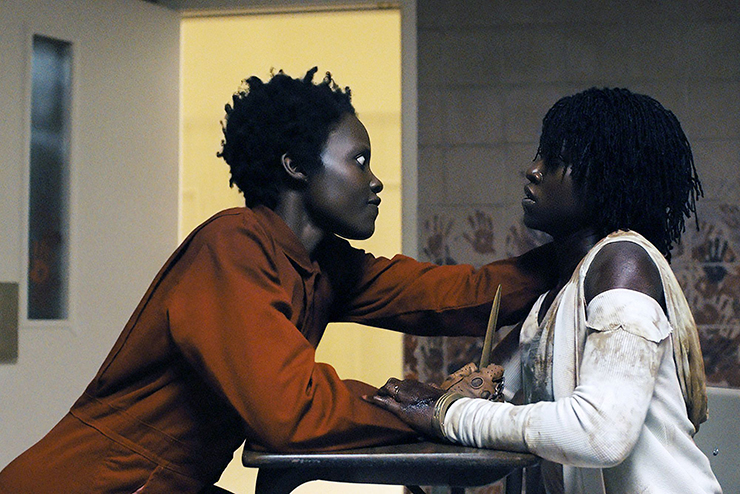 âUsâ: The movie of the moment gives viewers a lot of chew on but also fails to stick the landing. Jordan Peele made a splash back in 2017 with âGet Out,â his biting horror comedy that played like Wes Craven's âStepford Wives,â with a potent exploration of the racial divide. His newest creation, not counting his upcoming âTwilight Zoneâ reboot on CBS All Access, also deals with class warfare and race, but this time, the gifted comedian-turned-auteur isn't quite able to fuse laughs and chills as seamlessly as in his Oscar-winning predecessor. Don't blame the cast, led by a pitch-perfect Lupita Nyong'o, in her first starring role, and Winston Duke, her brawny/goofy/sexy âBlack Pantherâ co-star, as Adelaide and Gabe, a married couple who, along with their son and daughter, come face-to-face with their looking-glass doppelgangers during a beach holiday in Santa Cruz, California. 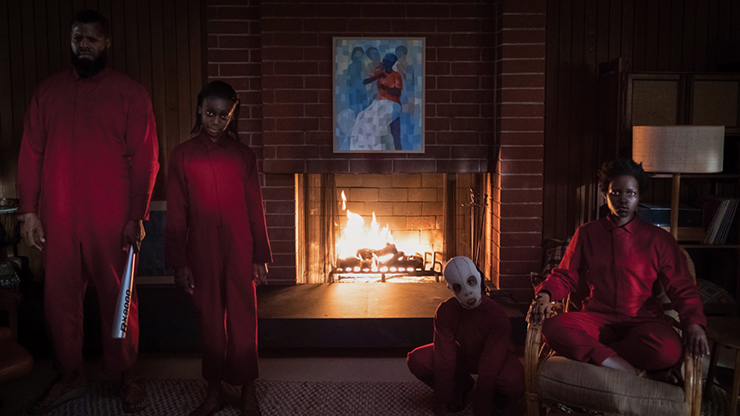 The film's first act shows Peele working at the top of his game, as he lays the groundwork for what promises to be a gripping ride bolstered by political underpinnings and some stinging one-liners. But once the family is confronted with their spooky body doubles, âUsâ too often falls back on increasingly uninspired home-invasion tropes.

There's also a deflating disparity between how risk-prone the movie's central quartet are as opposed to the rest of the characters. You know a horror movie's is in trouble when the most transgressive moment doesn't involve its protagonists. It all comes crashing down in a weirdly prolonged third act where Peele attempts to strike a balance between explaining the mystery at its core and leaving some things ambiguous, but he only succeeds in grinding the movie to a halt. Imagine if Alfred Hitchcock had tried to explain why the winged menaces in âThe Birdsâ began attacking people without warning.

The threat goes out the window, and it pains me to report âUsâ is an ambitious misfire, a near miss that gets lost in its atmospheric, beautifully rendered hall of mirrors. (I really hate myself right about now.) 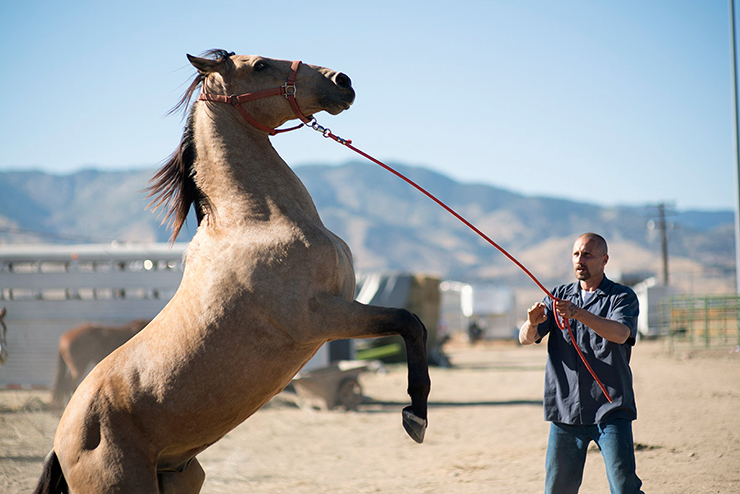 âThe Mustangâ: And I'm afraid the reality-check bucket of cold water extends to this Sundance 2019 selection, which also screened during this year's Miami Film Festival. Coming on the heels of the (considerably superior) horse tales âThe Riderâ and âLean on Pete,â this reasonably watchable but rather mundane prison drama chronicles the testy bond that forms between Roman (strapping Belgian chameleon Matthias Schoenaerts, capably playing an angry American) and the titular horse that's rounded up for the rural Nevada facility's real-life rehabilitation therapy, which involves the training of these majestic creatures. (No, I'm not talking about the immates.)

Roman, thrown in the slammer for a horrific domestic crime, is a tightly wound mess, which makes for walking-on-eggshells tension between him and his estranged (and very pregnant) daughter Martha (Gideon Adlon). His prison psychologist (Connie Britton) can't seem to get through to the sullen loose cannon, but veteran trainer Myles (Bruce Dern, doing his grizzled Bruce Dern thing) sees something in the convict. What follows had the potential to be a gritty, grown-up variation âThe Black Stallion,â but director/co-screenwriter Laure de Clermont-Tonnerre, who, like âThe Rider'sâ ChloÃ© Zhao and âLean on Pete'sâ Andrew Haigh, are foreigners telling distinctly American stories, has other ideas. She opts for no-frills realism, with cinematographer Ruben Impens providing occasionally arresting lensing.

Her steadfast commitment to stick to a sedate and, let's be honest, flavorless approach keeps her film reined in. But what really keeps âThe Mustangâ earthbound is its Amerindie 101 plotting, involving clichÃ©d intrigue behind bars, that threatens to upstage its central meeting of hotheads. The film ends with a quietly devastating glimpse of freedom that's just out of reach, but that powerful image comes too late for this middle-of-the-road effort to fully resonate. 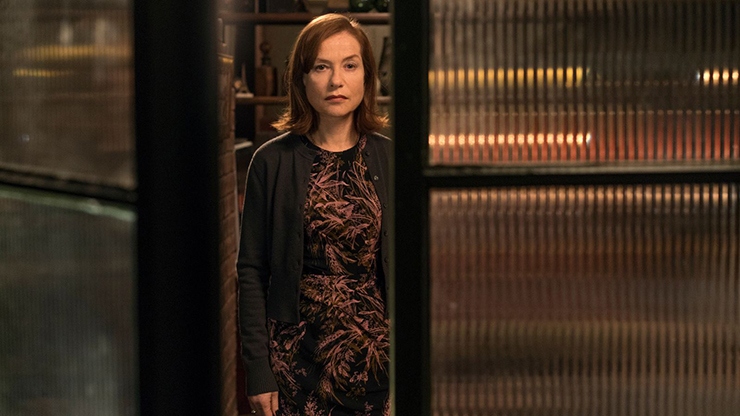 âGretaâ: The French-born De Clermont-Tonnerre isn't the only European director dipping her storytelling toe across the pond. Irish filmmaker Neil Jordan (âThe Crying Game,â âBreakfast on Plutoâ) returns from a six-year hiatus from big-screen work with this tasty yet surprisingly slight stalker thriller headlined by the regal Isabelle Huppert as the title character, a clingy New York City shut-in who befriends Frances (ChloÃ« Grace Moretz), a kindhearted but naÃ¯ve restaurant server who's still in mourning over the loss of her mother. There's a lot of attention to character detail in the screenplay, credited to Jordan collaborated and horror scribe Ray Wright, at least in the early going. The film appears to prioritize the women's bond, which deepens after Frances returns the purse Greta left behind on the subway.

But it doesn't take long for Frances to discover her new BFF with the carefully studied French accent and an affinity for Franz Liszt's âLiebestrÃ¤umeâ is cuckoo in the head. Even worse, she wants to consume Frances' life. Unfortunately for the saucer-eyed ingenue, she's completely unprepared for the living nightmare that's about to take over, not only her waking hours, but her nightmares as well. The film then morphs into a more traditional cat-and-mouse yarn, which gives Jordan plenty of opportunities to let Huppert chew the scenery. '

This is all fun for a while, but the filmmaker isn't quite as adept as he thinks he is in turning the screws on the audience. The movie coasts by on the strength of its two leads' screen presence, as well as its handsome production values. It's thoroughly enjoyable, but ite ends up being too tidy for its own good. One can't shake the feeling there was a more nuanced, less genre-driven story here that gets tossed to the sidelines for the sake of cheap thrills.

âCaptain Marvelâ: You know it's going to be a topsy-turvy movie year when this Marvel Cinematic Universe detractor is forced to admit he enjoyed an MCU cash cow, but such is the unlikely outcome from catching up with this sneakily absorbing origin story. Credit is not just due to the casting bull's-eye of Brie Larson as the titular visitor from outer space, called Vers in her home planet of Kree, who discovers her complicated, amnesia-erased ties to Earth after an extraction mission goes awry circa 1995. It's also not just due to a strong supporting cast, including Samuel L. Jackson as a younger Nick Fury (a.k.a. the future head of the Avengers-housing spy agency S.H.I.E.L.D.) and the esteemed Ben Mendelsohn as (what else?) a shapeshifting alien baddie. Credit the husband-and-wife directing team of Anna Boden and Ryan Fleck (âHalf Nelson,â âIt's Kind of a Funny Storyâ) for infusing the boilerplate proceedings with their trademark generosity of spirit.

OK, so it wasn't love at first sight. âCaptain Marvel'sâ first half hour or so is a bit of a shambles, obtuse and scattershot in all-advised ways. But never underestimate the power of 1990s nostalgia (just ask Christophe HonorÃ©). Once the movie lands on Earth, Boden and Fleck find their footing (and a Blockbuster Video call-out). They keep viewers engaged because they're more interested in their lead character's emotional journey than in the way she kicks butt. (The action sequences are adequately staged, but they're not the movie's strong suit.) As long as we're talking secret weapons, give it up for Goose the Cat, a fluffy companion/comic relief who's hiding a couple of surprises under his tabby fur. He's my kind of Marvel do-gooder. He makes this somewhat underappreciated adventure go down easy. Call him the antidote to the MCU's propensity for Thanos-sized bloat.

âUsâ and âCaptain Marvelâ are now showing in wide release. âThe Mustangâ gallops to South Florida screens this weekend at several locations, including the Coral Gables Art Cinema and the Classic Gateway Theatre. âGretaâ is ending its local theatrical release at the CinÃ©polis cineplex in Coconut Grove, so hurry up if you want your Huppert fix. And Strand Releasing is planning a DVD release for âSorry Angelâ later this year.Â