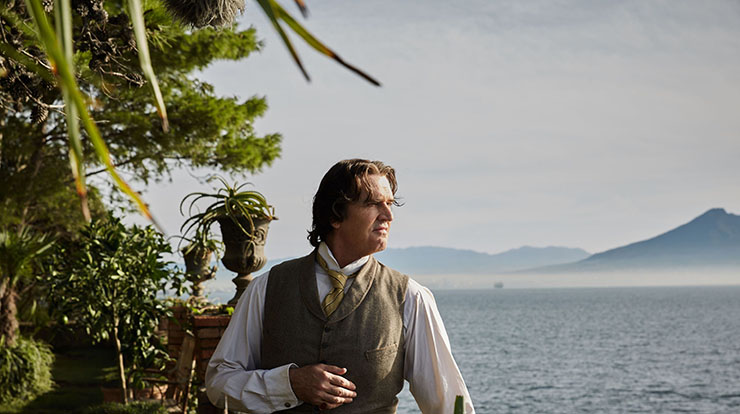 There he was, surrounded by friends but still approachable. And yet I lost my nerve all the same. Your intrepid reviewer was standing about 20 feet away from Rupert Everett in the dimly lit confines of the Cactus Bar and Grill. It was sometime in the late '90s, about a year after he achieved more recognition than usual stateside playing Julia Roberts' tough-love gay sidekick (is there any other kind?) in âMy Best Friend's Wedding.â He looked in my direction. It was now or never.

I gave him a quick wave, turned around and walked off to another area of the Miami watering hole, long since closed. Did he wave back? Dear reader, I have no idea. I didn't stay long enough to find out.

That brief episode came to mind while sitting through âThe Happy Prince,â a biopic about Oscar Wilde's final days that Everett spent nearly a decade trying to get off the ground. In the interim, the actor's star has dimmed considerably on these shores, even as he's continued to work in front of the camera and on the stage. But you wouldn't know his long-gestating passion project, which he wrote, directed and stars in, was coming out in theaters from even fellow peers, most of whom stared at me dumbfounded when I told them about its commercial release. 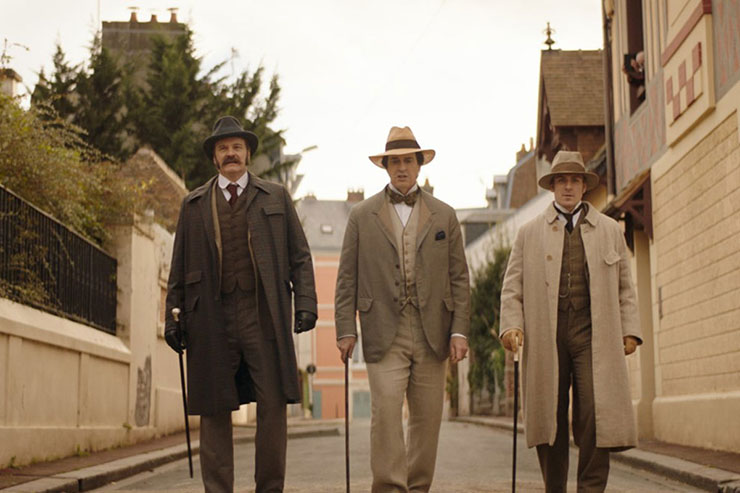 And the bottom line is that the film, fresh off its local premiere as part of Fort Lauderdale's OUTshine Film Festival lineup, merits a far better fate than its cursory, low-profile release in multiplexes. Everett has set up a Herculean challenge for his directing debut, and he rises to the occasion with visual panache, depth of feeling and a commitment to avoid facile generalizations about the literary giant.

The film opens with a bedtime reading, as a younger Wilde regales his two young sons with the titular story. But don't get too comfortable. All of a sudden we're following Wilde, older and conspicuously ill, as he hobbles down a rain-soaked Paris street circa 1900. A high-society woman from London recognizes him, and her shock and dismay mirrors ours. A titan of the written and spoken word is here reduced to a shell of his former self, pushing himself forward as if he were carrying the weight of the world (or, more accurately, his misfortunes) on his shoulders. The woman's husband, once a fan of Wilde's delightful plays, intervenes, threatening to kill him if he ever comes near his wife again. 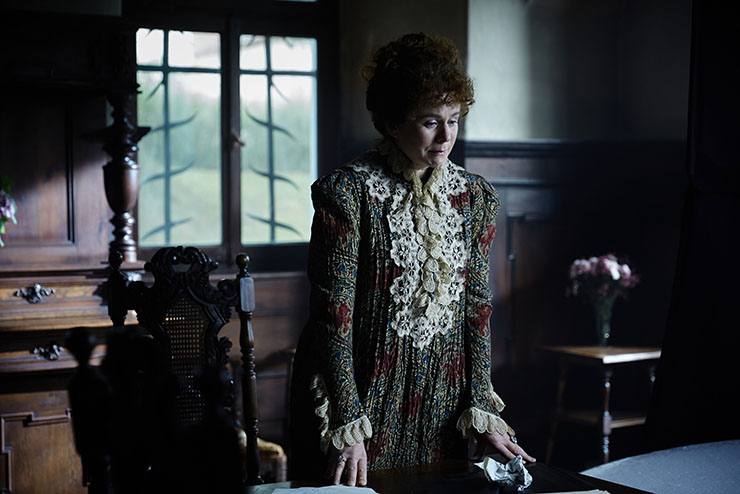 But lest you think Everett wants viewers to suffer alongside the sickly author, rest assured âThe Happy Princeâ is far from a wallow in misery. The novice helmer has crafted a wise and resonant meditation on disillusionment and how hardship changes a man, even one as confident as this Irish poet, playwright, one-time novelist and epigram master. The director also sidesteps the pitfall of depicting the persecution he suffered because of his sexual orientation as an issue. The subject surfaces organically, like in a scene where Wilde enjoys a post-coital conversation with the street urchin he pays for sex. (A casual full-frontal glimpse of the young hustler serves to underscore this is a movie that refuses to look away, even as it keeps intercourse off screen.)

Another scene shows a bunch of disagreeable English lads taunting the literary icon and his longtime friends Robbie Ross (Edwin Thomas) and Reggie Turner (Colin Firth, rocking a paintbrush mustache as he embodies a character who was a couple of decades his junior). Everett could have settled for a clash straight out of a social-problem movie. We are, after all, talking about a group of bigoted douchebags harassing three openly gay men until they end up at, of all places, a church. But instead, the filmmaker places the emphasis on Wilde's own weariness at finding himself the target of widespread scorn and ridicule. 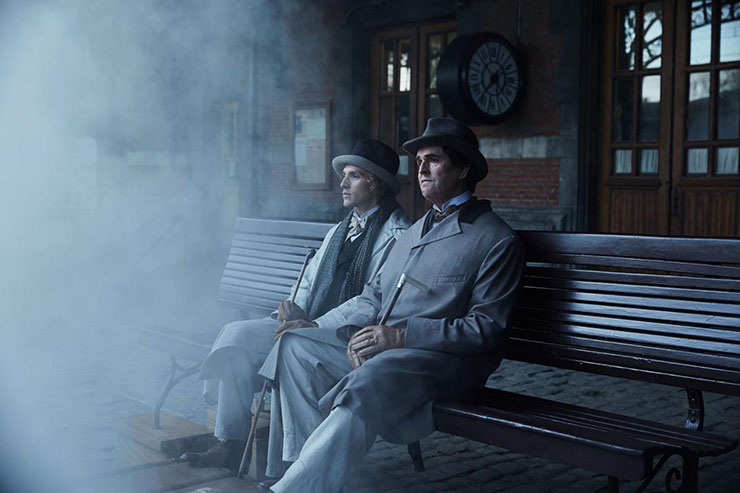 Following its opening moments, the film turns back the clock three years to show Wilde just after he is released from prison, and from this point on, the film sticks to a fairly linear timeline, give or take a handful of impressionistic flashbacks. We follow Wilde during his exile, his name changed to Sebastian Melmoth, but what at first appears to be a chance for him to start over gradually curdles into a personal descent worthy of an Edith Wharton heroine. This would be a good time to point out that if you're not familiar with Wilde's life or body of work, some Google/Wikipedia-assisted brushing up is strongly recommended. Everett's screenplay is long on nuance but short on exposition; he clearly assumes viewers have some familiarity with the writer and his body of work.

Which is not to say âThe Happy Princeâ is particularly breaking new ground. As Wilde's fortunes change, and not for the better, Everett is navigating familiar material, such as the author's strained relationship with his wife Constance (Emily Watson), or his even more complicated bond with his romantic obsession, Lord Alfred Douglas (Colin Morgan), aka Bosie, aka the reason why Wilde ended up behind bars in the first place. But working closely with cinematographer John Conroy, Everett often opts for a rough-hewn handheld style that eschews Merchant Ivory stateliness while still managing to capture the beauty of the film's settings, especially in the scenes showing the time the author spent in Italy. Shards of a life thrillingly (if not always sensibly) lived dovetail into each other in this fever dream with echoes of Terence Davies, Terry Gilliam, Mike Leigh and, in some musically oriented flashes, Bob Fosse. 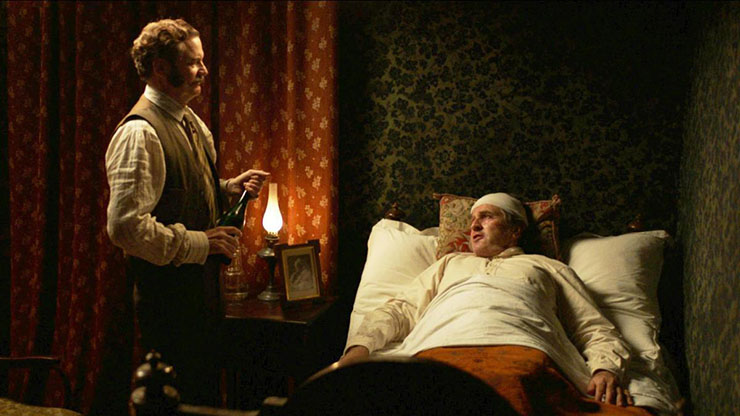 In other words, âThe Happy Princeâ might sound like tea-and-crumpets fare for the Masterpiece Theater crowd, but that's not quite the way it plays. The aesthetic idiosyncrasies Everett brings to the table prevent the finished product from becoming just another drama featuring Brits in period garb. Case in point: âWilde,â a far more conventional 1997 biopic starring Stephen Fry in the title role, covers more ground and is overall more audience-friendly. It's also not nearly as engrossing as Everett's take.

What stands out in âThe Happy Prince'sâ refreshingly eccentric spin on a shopworn genre is a lack of compromise. A sizable chunk of the film, for instance, is in French with subtitles. And even as Everett's in-your-face style occasionally makes the mise en scene feel overbaked and unruly, the movie is bolstered by a steadfast willingness to portray all facets of Wilde: the fatherly bedside storyteller, the stubbornly persistent suitor, the embittered absinthe junkie, the estranged but penitent husband, the irreverent wit who can't help poking fun at the upper crust that championed his work before turning on him. Even though it is very much a film about terminal illness and coming to terms with one's mortality, Everett has made the kind of warts-and-all portrait that matches ambition with a beguiling empathy. He's pulled off quite a high-wire act, one that does not deserve to get lost in the fall-movie shuffle.

IF YOU GO:Â "The Happy Prince" is now showing in theaters in South Florida including The Classic Gateway Theatre in Fort Lauderdale, Regal South Beach, and AMC Aventura 24.