A good story is a powerful thing. It wraps its tendrils around you and holds you rapt, a hostage situation of the happy kind. In this day and age of bite-sized information nuggets, a good story can coax short attention times into taking a time out. It whisks you off to another place and time before bringing you back home, transported and fulfilled. If it could be converted into energy, it would light up entire cities and still have enough juice left for several small towns and villages.

To those of us who grew up beguiled by bedtime stories, the light that a ripping yarn gives off shines even brighter when it seeks to commune with your inner child. In the film world, movies geared at all age groups have been looked down upon, a genre best reserved for weekend matinees and brunch crowds looking for an activity suitable for everyone in their group, or so conventional wisdom dictates. Ah, but when they're firing on all cylinders, they take hold of our collective unconscious. They leave a mark not easily washed away by the passage of time.

The holidays reach us in a year where most of us feel exhausted for a number of reasons, be it a lingering election cycle that's taking longer than expected to wrap up, or the ebb and flow of a pandemic that has claimed more than a million lives and has eroded our sense of security.

Moviegoers have stayed away from multiplexes in droves, understandably so. Nevertheless, new movies are still making their way to a theater near you, at least those that remain open, even if studios have pushed nearly all the big tentpole titles to 2021. New movies mean new stories aiming to fire up your imagination, an escape hatch from an often depressing reality. Two of them coming out this weekend, one in theaters and the other, at least locally, On Demand, want to reach the young and young at heart, and the contrast could not be more pronounced. One is a real keeper, the other a huge disappointment. Let's take a look. 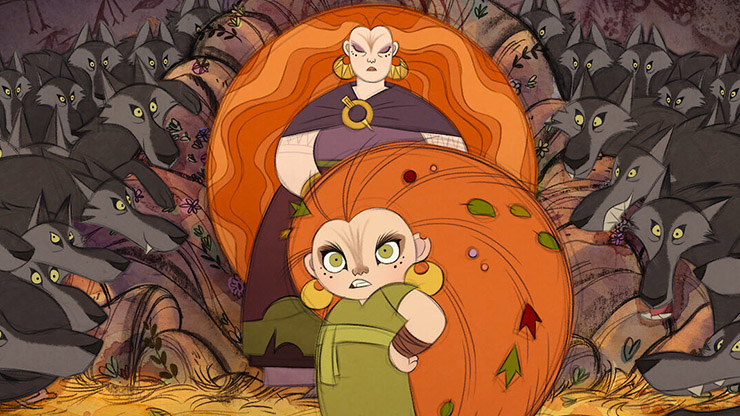 âWolfwalkersâ: Doing house chores sucks. They're a drag in any century, even more so when you're young and curious about your new surroundings. It's under these mundane yet relatable circumstances that we first meet Robyn Goodfellowe (the voice of Honor Kneafsey), the straw-haired and headstrong heroine at the center of this gorgeously animated folktale.

She doesn't want to stay cooped up all day when she could be out exploring. But see, that last part is something her dad, Bill (Sean Bean), would rather she refrain from doing. With the understanding that she'll stay put, Bill goes off to work, an Englishman in Kilkenny, Ireland, circa 1650. And Robyn, her broom tossed aside, quietly follows him, her pet falcon Merlin hovering above, into town and past the city walls. You know, precisely where her father asked her not to go. 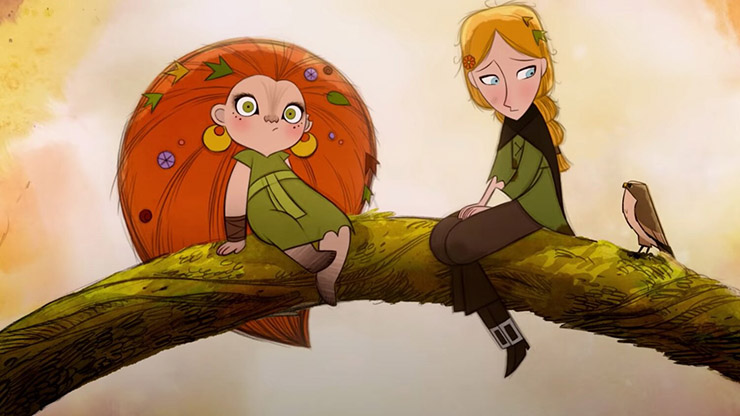 Curiosity will get our stubborn protagonist into trouble, but her brushes with peril, involving an enchanted forest, a most woolly matriarchy and toxic masculinity of a decidedly God-fearing bent, reaps rich dividends, for her (after some strife) and for the viewer. Robyn wants to follow in her father's footsteps and be a skilled hunter. That's actually why they moved from England. Bill has been tasked to remove the wolves who have been tormenting farmers and have left the citizens of Kilkenny living in fear. They eventually learn that there's more to these woodland predators than meets the eye. A lot more.

But try telling that to Oliver Cromwell (perennial villain Simon McBurney), a.k.a Lord Protector, who rules these lands with an iron fist while giving off Judge Frollo vibes. The historical figure is here turned into a ruthless leader who sees the wolves' extermination as a pathway to even more power, er, more prosperity for his subjects. There aren't really any weak links in âWolfwalkers,â but this is the one character that could have been fleshed out a little more. 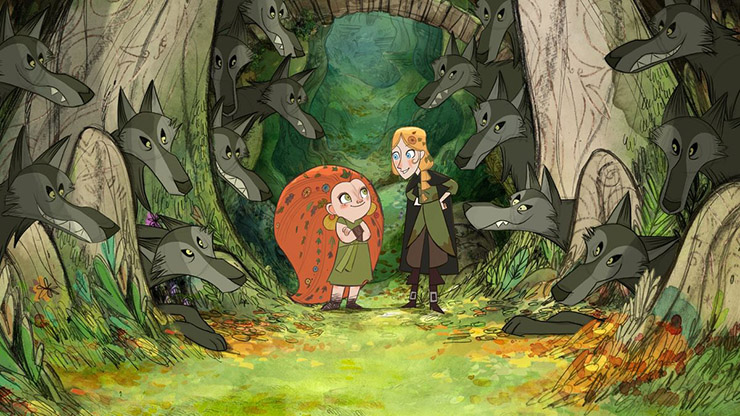 The movie's heroes are so finely etched, though, that this quibble amounts to nit-picking. Take, for instance, Mebh (pronounced âMaeve,â voiced by Eva Whittaker), the wild-child denizen of the forbidden woods that Robyn comes across. (I was going to say âbefriend,â but that's not how this relationship begins. The fact that, much like Mebh herself, the film's bark is worse than its bite doesn't mean it lacks teeth.) The character is a triumph of design, but great care has also been given to develop the personality of this freewheeling urchin with a devil-may-care attitude and a whopper of a secret. The bond that forms between the girls is âWolfwalkers'â beating heart. It's beautiful to behold. 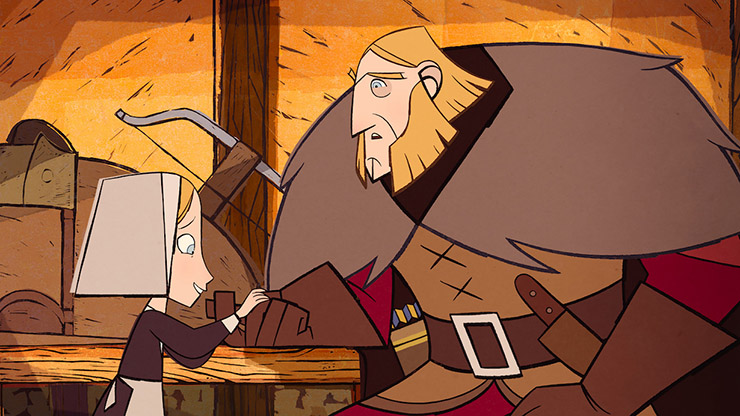 To reveal any more would deprive you of the joy of unlocking the film's surprises. (Avoid, if you can, the trailers, which spoil some of the mystical elements that are best left for you to discover on your own.) With expressionistic brush strokes and an autumnal palette, directors Tomm Moore and Ross Stewart dexterously juggle multiple thematic strands.

The film dips its toe in the paradigm-shift waters explored with rare nuance in the âHow to Train Your Dragonâ series. It's also very much a history lesson about life in Ireland under English rule, a father/daughter drama and a girl-power romp. One may argue Will Collins' screenplay has bitten off more than the filmmakers can chew, but aside from some schematic plot turns that attempt to create rifts between characters, it's commendable how well-balanced the movie feels.

âWolfwalkersâ stands so sturdily on its own paws that it's taken me this long to mention Moore's previous work. The film, a co-production between Ireland, France and Luxembourg, is a collaboration between Moore's Cartoon Saloon and Luxembourg-based MÃ©lusine Productions, but it bears the earmarks of Moore's previous forays into folklore: the Oscar-nominated âThe Secret of Kellsâ and âSong of the Sea.â His latest effort shows the veteran animator working at the top of his game. He and Ross have delivered a real corker: a meditation on family, oppression and resilience that's also a rollicking adventure. It's got nothing but love to give. Not into animated films? See it anyway. It really is that good. Run, don't walk.

âCome Awayâ: If âWolfwalkers'â flights of fancy feel effortless and wholly earned, this fairy tale-tinged costume drama shows what happens when drawing from classic children's literature yields stillborn, dispiritingly literal-minded results. A tone-deaf bore that brings together the comforting trappings of âAlice in Wonderlandâ and âPeter Pan,â then gives them a social problem spin, the film centers on the Littletons, an interracial couple and their three children, two of whom might be familiar to you. Alice (Keira Chansa), Peter (Jordan A. Nash) and David (Reece Yates) let their imaginations run wild when they're out playing. Through the (synthetic-looking) magic of CGI, the boys' wooden stick seamlessly become actual swords. That overturned boat they discover? It's actually a pirate ship, there for the taking from some generic seafarers. 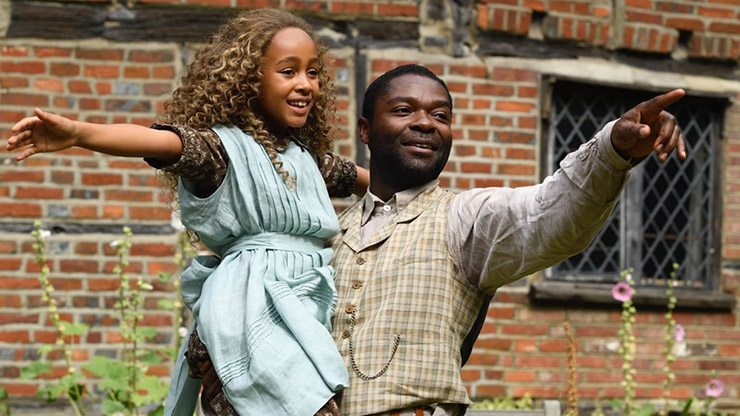 Their sister, meanwhile, hosts tea parties with her stuffed rabbit and yearns for acceptance from a society that turns up their noses at Jack (David Oyelowo), her model ship builder dad, ostensibly for his working-class background, but really, it's because they're a bunch of racist snobs.

Caught in the middle is the children's mother, Rose (Angelina Jolie). Jack's beloved clashes with her sister Eleanor (Anna Chancelor), a prim fuddy-duddy with her eye on giving Alice the kind of education befitting a lady. (Did you notice how Mom and Dad have the same first names as âTitanic'sâ star-crossed couple? But I digress.) The period-accurate racism is something director Brenda Chapman, working from a screenplay by Marissa Kate Goodhill, doesn't shy away from, but given the movie's 19th century setting, is all too conveniently subdued so as not to disturb its tea-and-crumpets sensibility. The film is further saddled with a rickety framing device involving the adult Alice, played by the esteemed Gugu Mbatha-Raw. 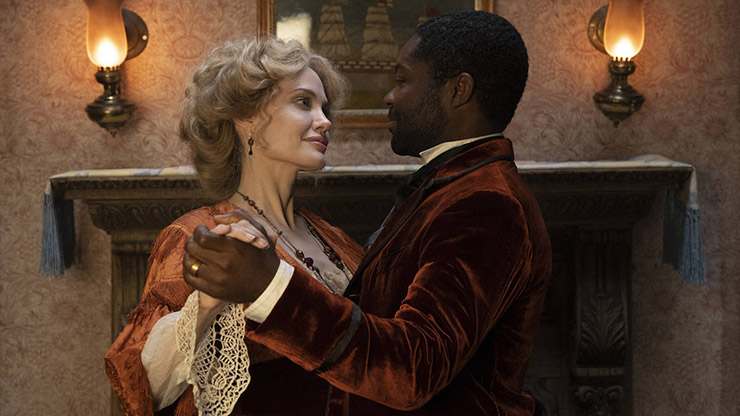 Sudden tragedy yanks the close-knit clan from their photogenic idyll, and this is where âCome Away,â propelled by its high-concept affectations, begins its descent from "cinema-of-quality period piece" into something more deplorable and ill-conceived. It utilizes a family's grief as a plot device, a spark to keep its creaky narrative wheels spinning, but you never feel that sense of irrevocable loss in your bones. The more Chapman grounds her exploration of J.M. Barrie and Lewis Carroll's creations in the Littletons' suffering, the less believable and more unhinged it becomes. What starts out feeling like a lecture from a disapproving aunt ends up taking one poorly judged turn after another. I checked out by the time Rose turns to the bottle to cope with her loss. Then the movie does something truly heinous and astonishingly misbegotten involving one of the children and an adult beverage. You don't want to know. That burrowing sound you hear is Carroll rolling over in his grave. 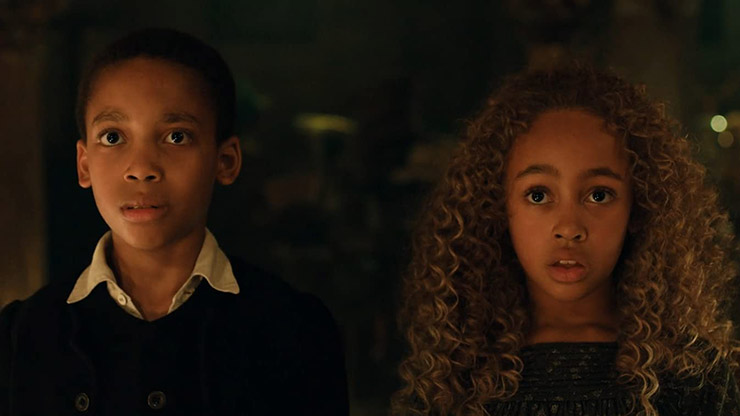 Chapman, who worked for Disney and DreamWorks' animation departments before helming âBraveâ for Pixar, has a background as a storyboard artist, and lamentably, her debut as a live-action feature director too often feels like a painstakingly illustrated concept in search of a film. Worse still, she takes a talented cast and crew down with her. It hurt to see Michael Caine and Derek Jacobi pick up paychecks for what amount to extended cameos. It hurt more to learn the film's production designer is the great Luciana Arrighi, a frequent Merchant Ivory collaborator, and its editor is Dody Dorn, who cut âMementoâ and Ridley Scott's âKingdom of Heaven.â

This kind of fairy tale revisionism is a delicate endeavor, and very difficult to pull off. âCome Awayâ shows, in seemingly interminable detail, how it can go disastrously wrong. It showcases how the road to Never Never Purgatory is paved with the best intentions. 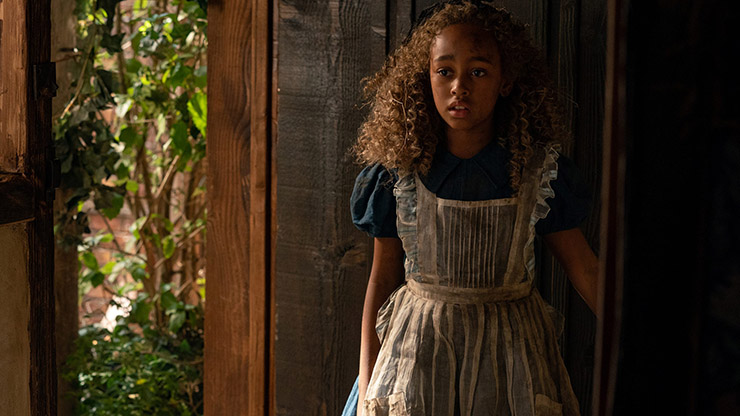 âCome Awayâ is currently available On Demand for $19.99. It had its world premiere earlier this year at the Sundance Film Festival. âWolfwalkersâ has also had festival screenings. It is showing this weekend only at AMC Aventura 24 and Sunset Place 24. It's also showing at The Landmark at Merrick Park, where it has a few additional showings scheduled during the week. Don't want to go to the theater? Good news. The movie debuts on Apple TV+ on Dec. 11. 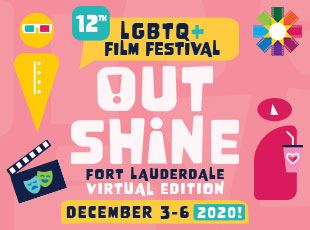