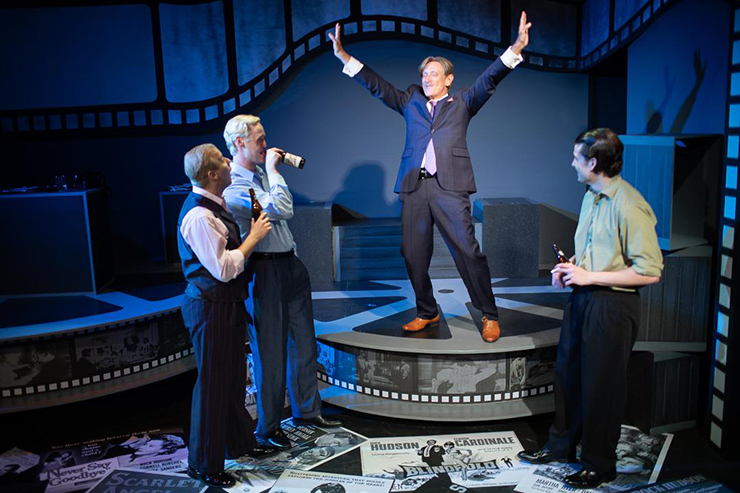 Itâs a fair bet that even Mama Rose would move over and let Hollywood agent Henry Willson work his magic with her daughters.

After all, this man turned the likes of Tab Hunter, Rory Calhoun, Troy Donahue and Rock Hudson into objects of fame.

While neither Mama Rose nor her daughters are characters in "Starmaker," Michael Leedsâ intriguing, touching, tragic and funny play, the aforementioned real-life figures populate the piece.

This new play about ambition, sacrifice, the cut-throat nature of Hollywood and our obsession with celebrity is receiving its world premiere. "Starmakerâs" mostly impressive debut production is running at Wilton Manorsâ Island City Stage through Sunday, Sept. 8.

Certainly, Baby Boomers and Hudson fans should find reasons to rejoice in this play. Thatâs because Hudson is one of two main characters â the other is Willson. Hollywood dubbed them âBeauty and the Beast,â what with Hudsonâs stunning looks and Willsonâs comparatively homely appearance. 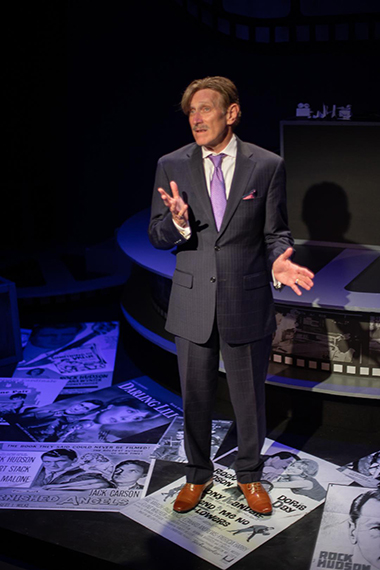 Obviously, Willson is relaying to us his relationship with Hudson as he remembers it. But heâs also âcastâ his other star âcreationsâ (i.e. Hunter, Calhoun, etc.) as âactors." They play multiple roles, including themselves, in Willson's recollection about his working and non-working relationship with Hunter. We witness, among other things, how the agent focused on molding and shaping Hudson while neglecting the others. Willson is on-stage throughout. He observes scenes from the past, as they transpire through his memory.

Fortunately, this framing device never makes the play hard to follow. Further, while many characters populate the play, this shouldnât cause audience members to feel lost. On the contrary, theyâll likely become lost in this gripping story, which moves briskly, yet allows us to keep up.

"Starmaker" begins at the end. Specifically, the play opens with 1950s and 1960s movie star Hudsonâs memorial service. Friends are scattering his ashes, as Willson narrates. Then, the agent paraphrases Maria von Trapp by telling us,âLetâs start at the beginning.â

Without overdone exposition, the play officially begins with Willson meeting a young Hudson. The latter is a delivery truck driver obviously trying to find fame.Well, the young man obviously came to the right place â and person.

In language that illustrates Willsonâs boastfulness, he proclaims, âIâm his mother, his father, his creator, his Svengali. I made Rock Hudson! I took a young, unformed hunk of clay â and I turned it into a legend. But then, thatâs what I do. Thatâs my job. My art."

Unfortunately, forces beyond our control can undo success and stardom just as easily, as Leedsâ play illustrates.

Sure, the playwright illustrates how Hudsonâs handsomeness and Willsonâs no-holds-barred ambition combined to create successes. But Leeds balances brightness with darkness. In particular, he demonstrates how disagreements between two strong-willed people, the AIDS crisis, homophobia and Hollywoodâs inner workings combined to bring Willson and Hudson down.

Surely, with "Starmaker," we likely experience the kind of strong emotions we might feel while watching a Shakespearean tragedy. Itâs hard not to, while witnessing the demise from AIDS-related complications of a strong, young, ultra-popular and talented man in Hudson with seemingly everything to live for.

While itâs hard to pinpoint a âtragic flawâ in Hudson and associate it with his death, one might attribute unchecked ambition and feelings of invincibility to Willsonâs demise. Still, that doesnât diminish the tragedy. As ruthless and cunning as the older man could be, Leeds makes it obvious that he was still a devoted agent and advocate.

Moreover, David Edwards, an actor who boasts touring, Broadway and Off-Broadway credits, offers a multi-faceted, vivid and highly-nuanced portrayal of Willson. For instance, the performer imbues the agent with a joyous playfulness when Willson hosts the actors he represents at his house for game night. In addition, Edwardsâ Willson fondly pats his âboysââ shoulders to encourage them and convince them that heâs more than their agent. Indeed, he looks and sounds as though heâs also their friend.

But rest assured that Willson, as Edwards embodies him, is opportunistic, flashy and sly. Further, Edwards is perfectly cast as the agent, calling to mind perhaps the late actor Jack Palance.

With silver/grayish hair, mustache and sometimes sporting a dark suit, this man oozes glamour, shrewdness and confidence. A conspiratorial nature often suffuses him.

Willson walks slowly and methodically as he ponders something or shows everyone who is in charge. In addition, he punctuates his statements with hand gestures such as a wagging finger, reminding others that heâs the expert; he knows how things work in Hollywood and people should mark his words. During other times, his eyes narrow in anger, suspicion or as though heâs considering just how to shape one of his origami projects. But his eyes can also widen considerably in intensity, making them look like they belong to Hannibal Lecter.

Edwards, at turns, speaks in a pleasant, charming, yet shrewd voice. But cross Willson, and a thunderous shout escapes his voice.

Toward the end of the play, Edwardsâ Willson has transitioned seamlessly into a vulnerable, desperate, powerless, stumbling man. Heâs like a scared, trapped animal.

All in all, itâs a well thought-out, masterful and versatile performance.

Meanwhile, versatility is an apt way to describe local, multi-award-winning actor Clay Cartlandâs portrayal of Hudson. The fresh-faced Cartland, sporting neatly-combed dark hair, at first lends the heartthrob of Hollywoodâs Golden Age innocence, youthful eagerness and likability. Soon, Cartland adds wide-eyed, but not cutthroat, ambition to the mix. Before long, the much-younger Hudson is practically standing nose- to-nose with Willson, standing up for himself and demanding the kind of roles usually reserved for veterans. Sure, Cartlandâs Hudson can be difficult. Butthe actor ensures that we always root for his character.

Fortunately, the scenes between Willson and Hudson convince us that a fondness always existed between the twoÂ Â â even when they didnât agree on matters.

Unfortunately, such a chemistry doesnât exist between Cartland and Sahid Pabon as Jack, Hudsonâs lover. Pabonâs Jack is rather bland. As a result, itâs hard to imagine why Hudson loves the man.

On a more positive note, Jeanine Gangloff Levy credibly plays Lana Turner as a strong female character. Surely, it would have been easy to play Turner as the stereotypical âblonde.â But Levy imbues her character with an assertiveness and forthright manner that will surely please #MeToo advocates and modern audiences. This woman, her cartoonish yellow costume non-withstanding, is no caricature. Rather, sheâs a human being with feelings. And she will not let others push her around. 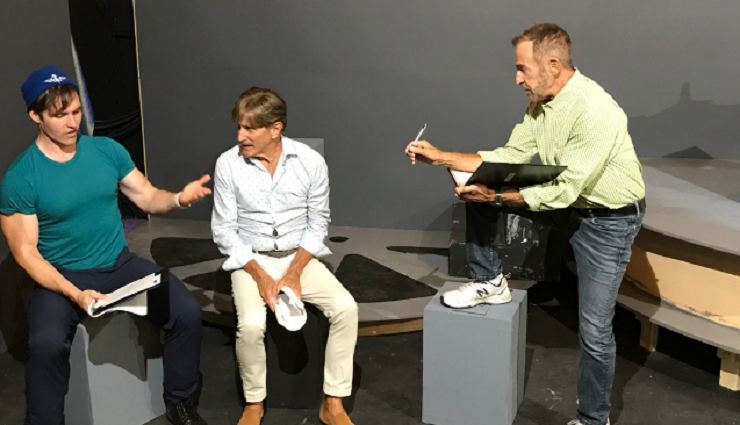 On a related note, Leeds includes a scene during which two characters essentially express a desire for stronger, less stereotypical female characters in romances. Certainly, itâs a scene that speaks to modern times.

Meanwhile, a disturbing moment toward the end of the play is eerily reminiscent of 2019. To be sure, the days in which people called homosexuality a âsubversiveâ act are over. Yet, we canât help but shudder or squirm when FBI agents barge into Willsonâs office.

âMr. Willson, are you a homosexual?â one of them asks. The FBI agent claims such âsubversiveâ acts amount to a âthreat to national security.â

Naturally, with an increase in white nationalism and hatred throughout the country, some may feel weâre regressing to a troubled past. Undoubtedly, itâs scary.

"Starmaker," which spans the 40s through the 80s, includes the time when a little known disease, which we know all too well today as AIDS, was killing gay men, among others. While we fear the disease less these days, with advances in treatment, itâs nevertheless heartbreaking. Without making his play depressing, Leeds touches on the AIDS crisis and Hudsonâs death just enough to make tissues come in handy. Curiously, Hudson doesnât age throughout the play (he died at age 59 from AIDS-related complications). Simple make-up and hair-dye would have sufficed.

Also, weâre offered practically no hints of time passing, even though the play spans four decades. For instance, W. Emil Whiteâs character-defining costumes hardly hint at changing decades. Neither does the set, which contains some period props, suggest passage of time.

However, Ardean Landhuisâ scenic design is symbolic and appropriate. In particular, poster ads related to news about Rock Hudson and other stars adorn the stage floor. In addition, oversized, winding film snakes its way throughout the set. Itâs also embedded into platforms. The winding, curvy film, with its peaks and valleys, can suggest the high and low points of life as a Hollywood actor â and the careers of Hudson as well as Willson. Weâre drawn closely into this world, thanks to Island City Stageâs extremely intimate auditorium.

Leeds, who is directing his play, uses the entire wide set to suggest different locales such as a bar and Willsonâs house. Mostly, Landhuis, who doubles as lighting designer, highlights a particular area of the set to suggest a location.

Speaking of the lighting, the designer uses a variety of colors, enhancing mood and perhaps suggesting the colorful lifestyle of Hollywood types. Scene and lighting changes happen at a cinematic-like pace. Of course, this is appropriate for a play about cinema.

As a director, Leedsâ staging is inventive and varied. Also, he strikes the right balance between humor and pathos. And again, his pacing is quick and lively, but it allows us to follow the action. During the reviewed performance, the timing of some lighting cues was off, but that is fixable.

But overall, "Starmaker" is a touching, funny, yet ultimately tragic look at a working and personal relationship that we wish never ended.

Then again, itâs cathartic to know that it existed in the first place.